William Huskisson PC (11 March 1770 – 15 September 1830) was a British statesman, financier, and Member of Parliament for several constituencies, including Liverpool. He is best known today, however, as the world's first widely reported railway casualty as he was run over and fatally wounded by George Stephenson's pioneering locomotive engine Rocket.

Huskisson was born at Birtsmorton Court, Malvern, Worcestershire, the son of William and Elizabeth Huskisson, both members of Staffordshire families. He was one of four brothers. After their mother Elizabeth died, their father William eventually remarried and had further children by his second wife. His half-brother Thomas Huskisson was a captain of the Royal Navy, an eyewitness of Trafalgar, and was appointed as the Paymaster of the Navy. His other half-brother George Huskisson was an officer in the Royal Marines before taking up his appointment as Collector of Customs at Saint Vincent.

Huskisson was a student at Appleby Grammar School (later renamed Sir John Moore Church of England Primary School), a boarding school designed by Sir Christopher Wren on the Leicestershire/Derbyshire borders. In 1783, Huskisson was sent to Paris to live with his maternal great-uncle Dr. Richard Gem, who was physician to the British embassy there. He remained in Paris until 1792, and his experience as an eyewitness to the prelude and beginning of the French Revolution gave him a lifelong interest in politics. Huskisson first came to public notice while still in Paris. As a supporter of the moderate party, he became a member of the "Club of 1789," which favoured making France into a constitutional monarchy. On 29 August 1790, he delivered a speech entitled "Sur les Assignats", about the issue of assignats by the French government. This speech gave him a reputation as an expert in finance. From 1790 to 1792, the Marquess of Stafford was the British ambassador to Paris. Huskisson became a protégé of the Marquess, and returned to London with him[reprint verification needed]. 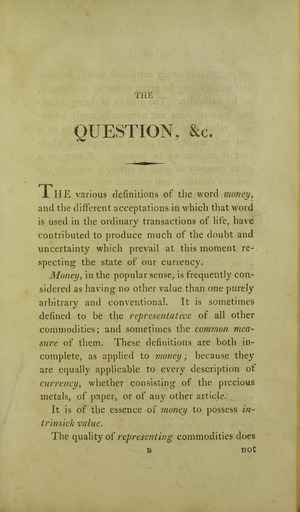 Question concerning the depreciation of our currency, 1810

Once in London, Huskisson quickly gained an additional two powerful political patrons: Henry Dundas, the Home Secretary, and William Pitt the Younger, the Prime Minister. Because of Huskisson's fluency in French, Dundas appointed him in January 1793 to oversee the execution of the Aliens Act, which mostly dealt with French refugees. In the discharge of his delicate duties, he manifested such ability that in 1795 he was appointed Under-Secretary at War (the Secretary at War's deputy).

In the following year he entered parliament as member for Morpeth, but for a considerable period he took scarcely any part in the debates. In 1800 he inherited a fortune from Dr Gem. On the retirement of Pitt in 1801 he resigned office, and after contesting Dover unsuccessfully he withdrew for a time into private life. Having in 1804 been chosen to represent Liskeard, he was on the restoration of the Pitt ministry appointed secretary of the treasury, holding office till the dissolution of the ministry after the death of Pitt in January 1806.

After being elected for Harwich in 1807, he accepted the same office under the Duke of Portland, but he withdrew from the ministry along with Canning in 1809. In the following year he published a pamphlet on the currency system, which confirmed his reputation as the ablest financier of his time; but his free-trade principles did not accord with those of his party. In 1812 he was returned for Chichester.

When in 1814 he re-entered the public service, it was only as First Commissioner of Woods and Forests, but his influence was from this time very great in the commercial and financial legislation of the country. He took a prominent part in the corn-law debates of 1814 and 1815; and in 1819 he presented a memorandum to Lord Liverpool advocating a large reduction in the unfunded debt, and explaining a method for the resumption of cash payments, which was embodied in the act passed the same year. In 1821 he was a member of the committee appointed to inquire into the causes of the agricultural distress then prevailing, and the proposed relaxation of the corn laws embodied in the report was understood to have been chiefly due to his strenuous advocacy.

In 1823 he was appointed President of the Board of Trade and Treasurer of the Navy, and shortly afterwards he received a seat in the cabinet. In the same year he was returned for Liverpool as successor to Canning, and as the only man who could reconcile the Tory merchants to a free trade policy. Among the more important legislative changes with which he was principally connected were a reform of the Navigation Acts, admitting other nations to a full equality and reciprocity of shipping duties; the repeal of the labour laws; the introduction of a new sinking fund; the reduction of the duties on manufactures and on the importation of foreign goods, and the repeal of the quarantine duties.

As a pro-planter Secretary for Colonies in 1826, he proposed the revised Consolidated Slave Law which was accepted by Parliament.

In accordance with his suggestion Canning in 1827 introduced a measure on the corn laws proposing the adoption of a sliding scale to regulate the amount of duty. A misapprehension between Huskisson and the Duke of Wellington led to the duke proposing an amendment, the success of which caused the abandonment of the measure by the government.

After the death of Canning in the same year Huskisson accepted the secretaryship of the colonies under Lord Goderich, an office which he continued to hold in the new cabinet formed by the Duke of Wellington in the following year. After succeeding with great difficulty in inducing the cabinet to agree to a compromise on the corn laws, Huskisson finally resigned office in May 1828 on account of a difference with his colleagues in regard to the disfranchisement of East Retford.

He was followed out of the government by other Tories who are usually described as Canningites including Lord Palmerston, Charles Grant, Lord Dudley, and Lord Melbourne. 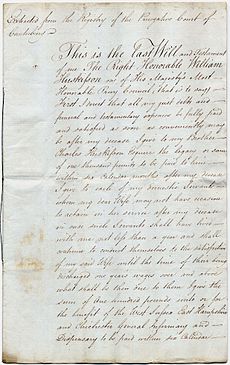 Page 1 of the last will of William Huskisson. 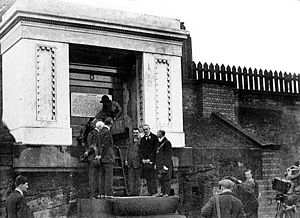 Unveiling of the Huskisson Memorial, 1913
Main article: Opening of the Liverpool and Manchester Railway

While attending the opening of the Liverpool and Manchester Railway, on 15 September 1830, Huskisson rode down the line in the same train as the Duke of Wellington, on the first of several trains moving in procession. At Parkside railway station, near the midpoint of the line, the locomotives made a scheduled stop to take on water. Although the railway staff had advised passengers to remain on the trains while this took place, around fifty of the dignitaries on board alighted when the Duke of Wellington's special train stopped. One of those who got off was William Huskisson, former cabinet minister and Member of Parliament for Liverpool.

Huskisson had been a highly influential figure in the creation of the British Empire and an architect of the doctrine of free trade, but had fallen out with Wellington in 1828 over the issue of parliamentary reform (Wellington was not in favour of reform) and had resigned from the cabinet. His political supporters hoped he might be reconciled with Wellington, and he approached the Duke's railway carriage at the Duke's invitation and shook his hand. Distracted by Wellington, he did not notice the approaching locomotive Rocket on the adjacent track.

On realising his danger he panicked and tried to clamber into the Duke's carriage, but the door of the carriage swung open leaving him hanging directly in the path of the oncoming Rocket. He fell onto the tracks in front of the train. There was a suggestion that "Huskisson was feeble in his legs" and that his "long confinement in St George's Chapel at the king's funeral brought on a complaint that ... the effect of which had been, according to what he told Calcraft, to paralyse, as it were one leg and thigh."[1]

His leg was horrifically mangled by the locomotive. The wounded Huskisson was taken by a train (driven by George Stephenson himself) to Eccles. When he reached hospital he was given a massive dose of laudanum. After being told his death was imminent he made his will, and died a few hours later.[2]

The Duke of Wellington felt that the remainder of the day's events should be cancelled following the accident at Parkside, and proposed to return to Liverpool. However, a large crowd had gathered in Manchester to see the trains arrive, and was beginning to become unruly. Wellington was persuaded to continue to Manchester, despite the advance of the trains being slow as they were now short of an engine. By the time the trains reached the outskirts of Manchester the crowd had become hostile and was spilling onto the tracks. With local authorities unable to clear the tracks, the trains were obliged to drive at low speed into the crowd, using their own momentum to push people out of the way.

Eventually they arrived at Liverpool Road railway station in Manchester to be met by a hostile crowd, who waved banners and flags against the Duke and pelted him with vegetables. Wellington refused to get off the train, and ordered that the trains return to Liverpool. Mechanical failures and an inability to turn the locomotives meant that most of the trains were unable to leave Manchester. While the Duke of Wellington's train left successfully, only three of the remaining seven locomotives were usable due to shortages of water. These three locomotives slowly hauled a single long train of 24 carriages back to Liverpool, eventually arriving 6½ hours late after having been pelted with objects thrown from bridges by the drunken crowds lining the track.

The death and funeral of William Huskisson caused the opening of the railway to be widely reported, and people around the world became aware for the first time that cheap and rapid long-distance transport was now possible.

The L&M became extremely successful, and within a month of its opening plans were put forward to connect Liverpool and Manchester with the other major cities of England. Within ten years, 1,775 miles (2,857 km) of railways had been built in Britain, and within 20 years of the L&M's opening over 6,200 miles (10,000 km) were in place. The L&M remains in operation, and its opening is now considered the start of the age of mechanised transport; in the words of industrialist and former British Rail chairman Peter Parker, "the world is a branch line of the pioneering Liverpool–Manchester run".

On 6 April 1799, Huskisson married Emily Milbanke, the youngest daughter of Admiral Mark Milbanke, the commander-in-chief at Portsmouth. Emily Huskisson survived her husband and remained a widow until her death in April 1856. They had no children. In 1800 Huskisson bought Eartham House in West Sussex from his friend William Hayley, and is commemorated in the parish church by a long carved eulogy from Emily on the south wall.

The monument where his remains are buried is the centrepiece of St James Cemetery, Liverpool.[3] A marble statue of him was housed in a mausoleum there until 1968, when it was transferred to the Walker Art Gallery in Liverpool.[4]