William II (1155 – 11 November 1189), called the Good, was king of Sicily from 1166 to 1189. William's character is very indistinct. Lacking in military enterprise, secluded and pleasure-loving, he seldom emerged from his palace life at Palermo. Yet his reign is marked by an ambitious foreign policy and a vigorous diplomacy. Champion of the papacy and in secret league with the Lombard cities he was able to defy the common enemy, Frederick I Barbarossa. In the Divine Comedy, Dante places William II in Paradise. He is also referred to in Boccaccio's Decameron (tale V.7).

Regency of his mother

William was only eleven years old at the death of his father William I, when he was placed under the regency of his mother, Margaret of Navarre. Until the king was declared adult in 1171 the government was controlled first by the chancellor Stephen du Perche (1166–1168), cousin of Margaret, and then by Walter Ophamil, archbishop of Palermo, and Matthew of Ajello, the vice-chancellor.

In 1174 and 1175 William made treaties with Genoa and Venice and his marriage in February 1177 with Joan, daughter of King Henry II of England and Duchess Eleanor of Aquitaine, marks his high position in European politics. This was not his first attempted marriage; an earlier effort by Bertrand II, archbishop of Trani, to negotiate the hand of a Byzantine princess yielded no fruit.

In July 1177, William sent a delegation of Archbishop Romuald of Salerno and Count Roger of Andria to sign the Treaty of Venice with the Emperor. To secure the peace, he married off his aunt Constance to the Emperor's son, the future Emperor Henry VI, causing a general oath to be taken to her as his heir presumptive. This step, of great consequence to the Norman realm, was possibly taken that William might devote himself to foreign conquests. 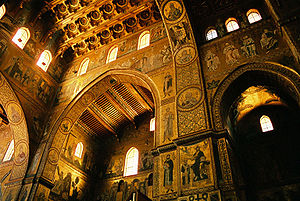 Monreale Cathedral, built during William's II reign. William and his parents are buried there.

Wars with Egypt and Greece

Unable to revive the African dominion, William directed his attack on Ayyubid Egypt, from which Saladin threatened the Latin kingdom of Jerusalem. In July 1174, 30,000 men were landed before Alexandria, but Saladin's arrival forced the Sicilians to re-embark in disorder.[1] A better prospect opened in the confusion in Byzantine affairs which followed the death of Manuel Comnenus (1180), and William took up the old design and feud against the Byzantine empire. Dyrrhachium was captured (11 June 1185). Afterwards while the army (allegedly 80,000 men including 5,000 knights) marched upon Thessalonica, the fleet (200 ships) sailed towards the same target capturing on their way the Ionian islands of Corfu, Cephalonia, Ithaca and Zakynthos. In August Thessalonica fell to the joint attack of the Sicilian fleet and army and was subsequently sacked (7,000 Greeks died).

The troops then marched upon the capital, but the army of the emperor Isaac Angelus defeated the invaders on the banks of the Strymon (7 November 1185). Thessalonica was at once abandoned and in 1189 William made peace with Isaac, abandoning all the conquests. He was now planning to induce the crusading armies of the West to pass through his territories, and seemed about to play a leading part in the Third Crusade. His admiral Margarito, a naval genius equal to George of Antioch, with 60 vessels kept the eastern Mediterranean open for the Franks, and forced the all-victorious Saladin to retire from before Tripoli in the spring of 1188. 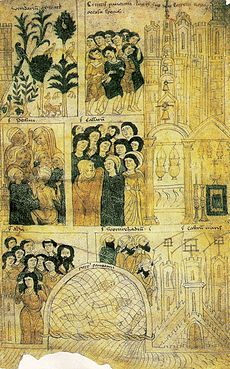 Palermo in mourning for the death of William II, from the Liber ad honorem Augusti by Peter of Eboli.

In November 1189 William died at Palermo, leaving no children. Though Robert of Torigni records a short-lived son in 1181: Bohemond, who was named Duke of Apulia. William's title of "the Good" is due perhaps less to his character than to the cessation of internal troubles in his reign.