From Infogalactic: the planetary knowledge core
Jump to: navigation, search
"Guillaume Longue-Épée" redirects here. For others of the same name, see William Longsword.

He is sometimes anachronistically dubbed "Duke of Normandy", even though the title duke (dux) did not come into common usage until the 11th century.[2] Longsword was known at the time by the title Count (Latin comes) of Rouen.[3][4] Flodoard—always detailed about titles—consistently referred to both Rollo and his son William as principes (chieftains) of the Norse.[5]

William Longsword was born "overseas"[lower-alpha 1][6] to the Viking Rollo, while he was still a pagan, and his Christian wife Poppa of Bayeux.[7][8] Dudo of Saint-Quentin in his panegyric of the Norman dukes describes Poppa as the daughter of a Count Beranger, the dominant prince of that region.[9] In the 11th century Annales Rouennaises (Annals of Rouen), she is called the daughter of Guy, Count of Senlis,[10] otherwise unknown to history.[lower-alpha 2] Despite the uncertainty of her parentage she was undoubtedly a member of the Frankish aristocracy.[11] According to the Longsword's planctus, he was baptized a Christian probably at the same time as his father,[12] which Orderic Vitalis stated was in 912 and by Franco, Archbishop of Rouen[13]

Longsword succeeded Rollo (who was still alive) in 927[14] and, early in his reign, faced a rebellion from Normans[15] who felt he had become too Gallicised and too soft.[16] According to Orderic Vitalis, the leader was Riouf of Evreux.[16][17][18] At the time of this rebellion Longsword sent his pregnant wife by custom, Sprota, to Fécamp where their son Richard was born.[19]

In 933, Longsword recognized Raoul as King of Western Francia, who was struggling to assert his authority in Northern France. In turn Raoul gave him lordship over much of the lands of the Bretons including Avranches and the Cotentin Peninsula.[20][21] Resistance to the Normans was led by Alan Wrybeard, Duke of Brittany and Count Berenger of Rennes but ended shortly with Alan fleeing to England and Beranger seeking reconciliation.[22]

In 935, Longsword contracted a marriage between his sister Adela (Gerloc was her Norse name) and William, Count of Poitou with the approval of Hugh the Great.[23] At the same time Longsword married Luitgarde,[1] daughter of Count Herbert II of Vermandois whose dowry gave him the lands of Longueville, Coudres and Illiers l'Eveque.[18] In addition to supporting King Raoul, he was now a loyal ally of his father-in-law, Herbert II, both of whom his father Rollo had opposed.[24] 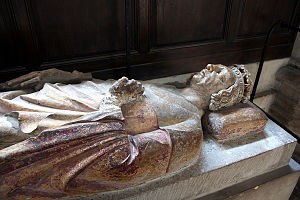 The funerary monument of William Longsword in the cathedral of Rouen, France. The monument is from the 14th century.

After Longsword attacked Flanders in 939, Arnulf I, Count of Flanders, and Louis IV, King of France, retaliated by attacking Normandy. Arnulf captured the castle of Montreuil-sur-Mer expelling Herluin, Count of Ponthieu. Herluin and Longsword cooperated to retake the castle.[25][26] Longsword was excommunicated for his actions in attacking and destroying several estates belonging to Arnulf.[27]

Longsword pledged his loyalty to King Louis IV when they met in 940 and, in return, he was confirmed in lands that had been given to his father, Rollo.[28] Almost three years later, on 17 December 942 at Picquigny on the Somme, Longsword was ambushed and killed by followers of Arnulf while at a peace conference to settle their differences.[18][26]

He had no children with his wife Luitgarde.[29] Longsword fathered his son, Richard the Fearless, with Sprota[lower-alpha 3] who was a Breton captive and his concubine.[30] Richard succeeded him.[29]