William I of Sicily

William's title "the Bad" seems little merited and expresses the bias of the historian Hugo Falcandus and the baronial class against the king and the official class by whom he was guided.

William was the son of King Roger II of Sicily, grandson of Roger I of Sicily and great-grandson of Tancred of Hauteville. He grew up with little expectation of ruling. The deaths of his three older brothers Roger, Tancred, and Alfonso between 1138 and 1148 changed matters, though when his father died William was still not well-prepared to take his place. 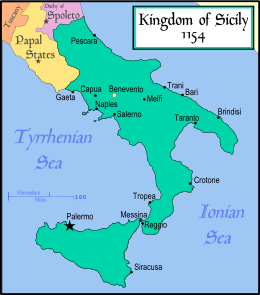 The Kingdom of Italy as it existed at the ascension of William I of Sicily in 1154. The borders would remain virtually unchanged for 700 years.

On assuming power, William kept the administration which had guided his father's rule for his final years. Only the Englishman Thomas Brun was removed, and the chancellor Maio of Bari was promoted. The real power in the kingdom was at first exercised by Maio, a man of low birth, whose title ammiratus ammiratorum was the highest in the realm. Maio continued Roger's policy of excluding the nobles from the administration, and sought also to curtail the liberties of the towns. The barons, always chafing against the royal power, were encouraged to revolt by Pope Adrian IV, whose recognition William had not yet sought, by the Byzantine Emperor Manuel I Comnenus, and by the Holy Roman Emperor Frederick I.

At the end of 1155, Greek troops recovered Bari, Trani, Giovinazzo, Andria, Taranto and began to besiege Brindisi. William and his army landed on the peninsula and destroyed the Greek fleet (4 ships) and army at Brindisi on May 28, 1156 and recovered Bari. Adrian came to terms at Benevento on June 18, 1156 where he and William signed the Treaty of Benevento, abandoning the rebels and confirming William as king. During the summer of 1157, he sent a fleet of 164 ships carrying 10,000 men to sack Euboea and Almira. In 1158 William made peace with the Greeks.

These diplomatic successes were probably due to Maio; on the other hand, the African dominions were lost to the Almohads, and it is possible that he advised their abandonment in face of the dangers threatening the kingdom from the north. In 1156, a revolt began in Sfax and quickly spread and nothing was done to put it down. In 1159, the admiral Peter led a raiding expedition against the Saracen-held Balearic Islands with 160 ships. He tried to relieve besieged Mahdia with the same fleet, but turned around just after engaging in battle. Peter did not fall out of favour, but no further assistance was sent to the Christians holding out in Mahdia and the city surrendered on 11 January 1160, ending the "African empire."

The policy of Maio led to a general conspiracy, and in November 1160 Maio was murdered in Palermo by Matthew Bonello, leader of the Sicilian nobles. The barons, however, had long been plotting to overthrow the king. Desiring a weak power on the throne, they had been eyeing the king's eldest son, Roger, Duke of Apulia, as a possible replacement for his father.

After the assassination of Maio, the royal palace was stormed by two of the king's own relatives: his illegitimate half-brother Simon, whom he had dispossessed of Taranto early in his reign and his bastard nephew Tancred, the count of Lecce. The king was captured along with his whole family, his life being barely spared by one Richard of Mandra. Roger was then paraded through the streets and it was announced that he would be crowned in the cathedral three days thence. 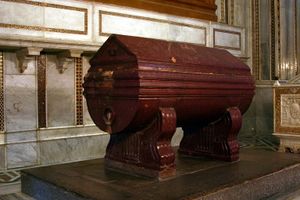 For a while the king remained in the hands of the conspirators who purposed murdering or just deposing him, but the people and the army rallied round him; he recovered power, crushed the Sicilian rebels, had Bonello blinded, and in a short campaign reduced the rest of the Regno, avenging the rebel burning of Butera. During the initial assault on the palace, to release the captive king, the king's son Roger was killed by a wayward arrow (though the historian Falcandus, seemingly ever-ready to impugn the royal character, has the king kicking his "faithless" son dead).

Thus freed from feudal revolts, William confided the government to men trained in Maio's school, creating a triumvirate: the grand protonotary, Matthew of Ajello; Count Sylvester of Marsico, who had inherited Maio's property; and the Bishop Palmer of Syracuse, elect, but not consecrated. His latter years were peaceful; he became the champion of the true pope against the holy roman emperor, and Alexander III was installed in the Lateran Palace in November 1165 by a guard of Normans.

William died on May 7, 1166 and was interred in Palermo Cathedral, although he was later moved to Monreale Cathedral[1] by his son and heir William II of Sicily when that building was completed. By his wife, Margaret of Navarre, daughter of García Ramírez of Navarre, he had four sons: