Sir William Jackson Hooker KH FRS (6 July 1785 – 12 August 1865) was an English systematic botanist and organiser, and botanical illustrator. He held the post of Regius Professor of Botany at Glasgow University, and was Director of the Royal Botanic Gardens, Kew. He enjoyed the friendship and support of Sir Joseph Banks for his exploring, collecting and organising work. His son, Joseph Dalton Hooker, succeeded him to the Directorship of Kew Gardens.[1]

Hooker was born in Norwich. His father, Joseph Hooker of Exeter, a member of the same family as the celebrated theologian Richard Hooker, devoted much of his time to the study of German literature and the cultivation of curious plants. He was educated at Norwich School and afterwards took up as a recreation the study of natural history, especially ornithology and entomology.[2] He subsequently confined his attention to botany, on the recommendation of Sir James Edward Smith, whom he had consulted respecting a rare moss.

Hooker inherited enough money to be able to travel at his own expense. His first botanical expedition—at the suggestion of Sir Joseph Banks—was to Iceland, in the summer of 1809. The specimens he collected, along with his notes and drawings, were destroyed by fire on the homeward voyage; an incident in which he nearly lost his life. His good memory, however, aided him to publish an account of the island, and of its inhabitants and flora; his Tour in Iceland, 1809, was privately circulated in 1811 and reprinted in 1813.

In 1810–1811 he made extensive preparations, and sacrifices which proved financially serious, with a view to accompany Sir Robert Brownrigg to Ceylon, but political upheaval led to the project being abandoned. In 1814 he spent nine months in botanizing excursions in France, Switzerland and northern Italy, and in the following year he married Maria Dawson Turner, the eldest daughter of Dawson Turner, banker, of Great Yarmouth, and sister-in-law of Francis Palgrave.

Settling at Halesworth, Suffolk, he devoted himself to the formation of his herbarium, which became of worldwide renown among botanists. In 1816 the British Jungermanniae, his first scientific work, was published. This was succeeded by a new edition of William Curtis's Flora Londinensis, for which he wrote the descriptions (1817–1828); by a description of the Plantae cryptogamicae of Alexander von Humboldt and Aimé Bonpland; by the Muscologia, a very complete account of the mosses of Britain and Ireland, prepared in conjunction with Thomas Taylor (1818);[3] and by his Musci exotici (2 vols., 1818–1820), devoted to new foreign mosses and other cryptogamic plants.

In 1820 he accepted the regius professorship of botany in the University of Glasgow where he soon became popular as a lecturer; his style was both clear and ready. The following year he brought out the Flora Scotica, in which the natural method of arrangement of British plants was given with the artificial. He worked with the Glasgow botanist and lithographer Thomas Hopkirk to establish the Royal Botanic Institution of Glasgow and to lay out and develop the Glasgow Botanic Gardens. In 1815, he was made a corresponding member of the Royal Swedish Academy of Sciences, and, in 1833, his status was changed to that of foreign member.

Hooker succeeded in convincing the British government that botanists should be appointed to their expeditions. While his works were in progress his herbarium received large and valuable additions from all parts of the globe, and his position as a botanist was thus vastly improved. He was made a Knight of the Royal Guelphic Order and a Knight Bachelor in 1836, and in 1841 he was appointed director of the Royal Botanic Gardens, Kew, on the resignation of William Townsend Aiton.[4] Under his direction the gardens expanded from 10 to 75 acres (4 to 30 Ha), with an arboretum of 270 acres (1.1 km2), many new glass-houses were erected, and a museum of economic botany was established. He was engaged on the Synopsis filicum with John Gilbert Baker when he contracted a throat infection then epidemic at Kew. He died in 1865 and is buried at St. Anne's Church, Kew.

He was succeeded at Kew Gardens by his son Sir Joseph Dalton Hooker, a rare example of an outstanding man succeeded in his post by an equally outstanding son.

The standard author abbreviation Hook. is used to indicate this individual as the author when citing a botanical name.[5] 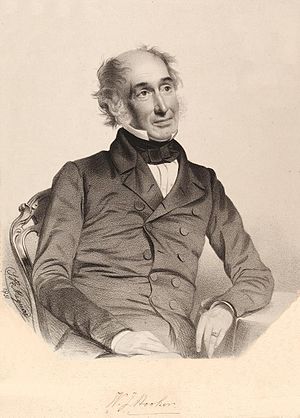