Kent introduced the Palladian style of architecture into England with the villa at Chiswick House, and for originating the 'natural' style of gardening known as the English landscape garden at Chiswick, Stowe House in Buckinghamshire, and Rousham House in Oxfordshire. As a landscape gardener he revolutionised the layout of estates, but had limited knowledge of horticulture.

He complemented his houses and gardens with stately furniture for major buildings including Hampton Court Palace, Chiswick House, Devonshire House and Rousham.

Kent was born in Bridlington, Yorkshire, and baptised, on 1 January 1686, as William Cant.[1]

Kent's career began as a sign and coach painter who was encouraged to study art, design and architecture by his employer. A group of Yorkshire gentlemen sent Kent for a period of study in Rome, he set sail on 22 July 1709 from Deal, Kent, arriving at Livorno on 15 October.[2] By 18 November he was in Florence staying there until April 1710, finally setting off for Rome. In 1713 he was awarded the second medal in the second class for painting in the annual competition run by the Accademia di San Luca for his painting of A Miracle of S. Andrea Avellino.[3] He also met several important figures including Thomas Coke, later 1st Earl of Leicester, with whom he toured Northern Italy in the summer of 1714 (a tour that led Kent to an appreciation of the architectural style of Andrea Palladio's palaces in Vicenza), and Cardinal Pietro Ottoboni in Rome, for whom he apparently painted some pictures, though no records survive. During his stay in Rome, he painted the ceiling of the church of San Giuliano dei Fiamminghi (Church of St. Julian of the Flemings) with the Apotheosis of St. Julian.[4] The most significant meeting was between Kent and Richard Boyle, 3rd Earl of Burlington. Kent left Rome for the last time in the autumn of 1719, he met Lord Burlington briefly at Genoa, Kent journeying onto Paris where Lord Burlington later joined him for the final journey back to England before the end of the year.[5] As a painter, he displaced Sir James Thornhill in decorating the new state rooms at Kensington Palace, London; for Burlington, he helped to decorate Chiswick House, especially the painted ceilings,[5] and Burlington House.

Kent started practising as an architect relatively late, in the 1730s.[6] He is better remembered as an architect of the revived Palladian style in England.[7] Burlington gave him the task of editing The Designs of Inigo Jones... with some additional designs in the Palladian/Jonesian taste by Burlington and Kent, which appeared in 1727. As he rose through the royal architectural establishment, the Board of Works, Kent applied this style to several public buildings in London, for which Burlington's patronage secured him the commissions: the Royal Mews at Charing Cross (1731–33, demolished in 1830), the Treasury buildings in Whitehall (1733–37), the Horse Guards building in Whitehall, (designed shortly before his death and built 1750–1759). These neo-antique buildings were inspired as much by the architecture of Raphael and Giulio Romano as by Palladio.[8] 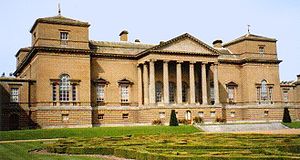 In country house building, major commissions for Kent were designing the interiors of Houghton Hall (c.1725–35), recently built by Colen Campbell for Sir Robert Walpole, but at Holkham Hall the most complete embodiment of Palladian ideals is still to be found; there Kent collaborated with Thomas Coke, the other "architect earl", and had for an assistant Matthew Brettingham, whose own architecture would carry Palladian ideals into the next generation. Walpole's son Horace described Kent as below mediocrity as a painter, a restorer of science as an architect and the father of modern gardening and inventor of an art.[9]

A theatrically Baroque staircase and parade rooms in London, at 44 Berkeley Square, are also notable. Kent's domed pavilions were erected at Badminton House and at Euston Hall.

Kent could provide sympathetic Gothic designs, free of serious antiquarian tendencies, when the context called; he worked on the Gothic screens in Westminster Hall and Gloucester Cathedral.

He worked on the house at 22 Arlington Street in St. James's, a district of the City of Westminster in central London from 1743, when it was commissioned by the newly elevated Prime Minister, Henry Pelham. When Kent died, the work was completed by Stephen Wright.[10] 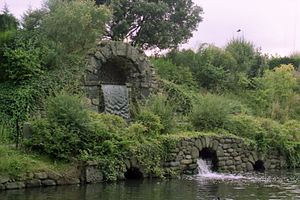 Cascade in gardens of Chiswick House

As a landscape designer, Kent was one of the originators of the English landscape garden, a style of "natural" gardening that revolutionised the laying out of gardens and estates. His projects included Chiswick House,[11] Stowe, Buckinghamshire, from about 1730 onwards, designs for Alexander Pope's villa garden at Twickenham, for Queen Caroline at Richmond and notably at Rousham House, Oxfordshire, where he created a sequence of Arcadian set-pieces punctuated with temples, cascades, grottoes, Palladian bridges and exedra, opening the field for the larger scale achievements of Capability Brown in the following generation. Smaller Kent works can be found at Shotover House, Oxfordshire, including a faux Gothic eyecatcher and a domed pavilion. His all-but-lost gardens at Claremont, Surrey, have recently been restored. It is often said that he was not above planting dead trees to create the mood he required.[12]

Kent's only real downfall was said to be his lack of horticultural knowledge and technical skill[13] (which people like Charles Bridgeman possessed – whose impact on Kent is often underestimated),[14] but his naturalistic style of design was his major contribution to the history of landscape design.[15] Claremont, Stowe, and Rousham are places where their joint efforts can be viewed. Stowe and Rousham are Kent's most famous works. At the latter, Kent elaborated on Bridgeman's 1720s design for the property, adding walls and arches to catch the viewer's eye. At Stowe, Kent used his Italian experience, particularly with the Palladian Bridge. At both sites Kent incorporated his naturalistic approach. 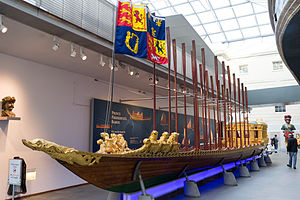 In his own age, Kent's fame and popularity were so great that he was employed to give designs for all things, even for ladies' birthday dresses, of which he could know nothing and which he decorated with the five classical orders of architecture. These and other absurdities drew upon him the satire of William Hogarth who, in October 1725, produced a Burlesque on Kent's Altarpiece at St. Clement Danes.

According to Horace Walpole, Kent "was a painter, an architect, and the father of modern gardening. In the first character he was below mediocrity; in the second, he was a restorer of the science; in the last, an original, and the inventor of an art that realizes painting and improves nature. Mahomet imagined an elysium, Kent created many."