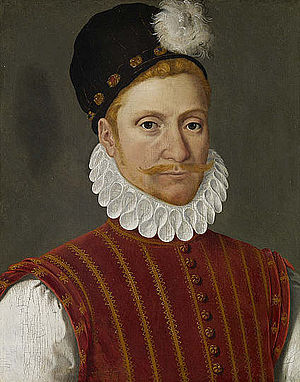 Sir William Kirkcaldy of Grange (c. 1520 –3 August 1573) was a Scottish politician and soldier who fought for the Scottish Reformation but ended his career holding Edinburgh castle on behalf of Mary, Queen of Scots and was hanged at the conclusion of a long siege.

The Grange lands were at Halyards Palace in Fife. William's father, James Kirkcaldy of Grange (d.1556), was lord high treasurer of Scotland from 1537 to 1543 and a determined opponent of Cardinal Beaton, for whose murder in 1546 William and James were partly responsible.

War with England, service with France, and the Reformation

William, with other courtiers, had been a witness to the instrument made at Falkland Palace at the deathbed of James V of Scotland in 1542 which Cardinal Beaton used to attempt to claim the Regency of Scotland.[1] However, William participated in the Cardinal's murder in May 1546, and when St Andrews Castle surrendered to the French in July the following year he was sent as a prisoner to Normandy, whence he escaped in 1550.

He was then employed in France as a secret agent by the advisers of Edward VI, being known in the cyphers as Corax; and later he served in the French army, where he gained a lasting reputation for skill and bravery. Kirkcaldy was in London in December 1553, discussing border issues with the French ambassador, Antoine de Noailles.[2]

The sentence passed on Kirkcaldy for his share in Beaton's murder was removed in 1556. Returning to Scotland in 1557 he became prominent by killing Ralph Eure the brother of the Governor of Berwick upon Tweed in a duel. As a Protestant he was one of the leaders of the Lords of the Congregation in their struggle with the Regent of Scotland, Mary of Guise. Kirkcaldy fought the French troops in Fife and they destroyed his house at Halyards. In January 1560 he took down part of Tullibody bridge to delay the return to Stirling of French troops commanded by Henri Cleutin.

Kirkcaldy opposed Queen Mary's marriage with Lord Darnley, and was associated with her half-brother the Earl of Moray at the time of the Chaseabout Raid. For this defiance, he was forced for a short time to seek refuge in England. Returning to Scotland, he was an accessory to the murder of Rizzio, but he had no share in Darnley's assassination.

Kirkcaldy was opposed to Mary's marriage with Bothwell and regarded the proceedings in the Scottish Parliament with dismay. He wrote to the Earl of Bedford, an English diplomat, that Mary did not care if she lost France, England and Scotland for Bothwell's sake, and Mary had said;

"she sall go with him to the warldes ende in ane white peticote or she leve him."[3]

Kirkcaldy was one of the lords who banded themselves together to rescue Mary after her marriage with Bothwell. After the fight at Carberry Hill the queen surrendered herself to Kirkcaldy. Bothwell escaped and Kirkcaldy sailed to Shetland as Lord High Admiral of Scotland in pursuit, but his ship, the Lion, ran aground north of Bressay.[4]

After Mary escaped from imprisonment at Lochleven Castle, his military command was mainly responsible for her defeat at the Battle of Langside. He seems, however, to have believed that a peaceful settlement with Mary was possible, and coming under the influence of William Maitland of Lethington, whom in September 1569 he released by a stratagem from his confinement in Edinburgh, he was soon vehemently suspected by his fellows. 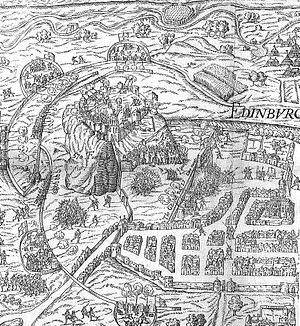 After the murder of Regent Moray in January 1570, Kirkcaldy ranged himself definitely among the friends of the imprisoned queen. About this time he forcibly released one of his supporters from imprisonment, a step which led to an altercation with his former friend John Knox, who called him a murderer and throat-cutter. Defying Regent Lennox, Kirkcaldy began to strengthen the fortifications of Edinburgh castle, of which he was captain, and which he now held for Mary. As Kirkcaldy's activities began to antagonise the town council of Edinburgh, he arrested some leading burgesses on 29 April 1571, and the subsequent period has become known as the "Wars between Leith and Edinburgh." In May Kirkcaldy built fortifications in the town, on the Royal Mile and on St Giles Kirk.[5] In October 1571 the town council established itself in Leith, and Kirkcaldy's men fortified Edinburgh by blocking the ends of streets and closes and burning houses on the outskirts of the city, such as Potterrow. The 'lang siege' of Edinburgh castle began in mid-October, when Regent Mar brought artillery from Dumbarton and Stirling Castle.[6]

On 27 January, William's brother, James Kirkcaldy arrived at Blackness Castle with arms and money for the Queen's side, but the castle was besieged by Regent Morton, and James Kirkcaldy was captured.[7] Early in 1573, Kirkcaldy refused to come to an agreement with Regent Morton because the terms of peace set out by the "Pacification of Perth" did not include a section of his friends.

After this, English troops and artillery arrived to help the Scots, and on 28 May 1573 the castle surrendered. Strenuous efforts were made to save Kirkcaldy from the vengeance of his foes, but they were unavailing; Knox had prophesied that he would be hanged, and he was hanged on the 3 August 1573.

On 15 July 1581, James VI restored his lands to his heirs, giving a long recitation of Kirkcaldy's service, mentioning a single combat in 1557 while Scotland was at war with England,[8] his support of the Scottish Reformation, and his conduct at Carberry Hill and pursuit of Bothwell;