William Laud (lawd; 7 October 1573 – 10 January 1645) was a clergyman in the Church of England, appointed Archbishop of Canterbury by Charles I in 1633. A key advocate of Charles's religious reforms, he was arrested by Parliament in 1640, and executed towards the end of the First English Civil War in January 1645.

A firm believer in Episcopalianism, or rule by bishops, Laudianism refers to liturgical practices designed to enforce uniformity within the Church of England, as outlined by Charles. Often highly ritualistic, these were precursors to what are now known as High Church views.

In theology, Laud was accused of Arminianism, favoring doctrines of the historic Church prior to the Reformation and defending the continuity of the English Church with the primitive and medieval Church, and opposing Calvinism. On all three grounds, he was regarded by Puritan clerics and laymen as a formidable and dangerous opponent. His use of the Star Chamber to persecute opponents like William Prynne made him deeply unpopular.

Laud favoured scholars, was a major collector of manuscripts, and pursued ecumenical contacts with the Greek Orthodox Church. The pun "give great praise to the Lord, and little Laud to the devil" is a joke attributed to Archibald Armstrong, Charles's court jester; Laud was known to be touchy about his diminutive stature.

Laud was born at Reading, Berkshire on 7 October 1573, the only son of William Laud, a clothier,[1] and Lucy, born Webbe, widow of John Robinson, another clothier of the town, and sister of Sir William Webbe, Lord Mayor of London. He was educated at Reading School, and on 17 October 1589 matriculated at St John's College, Oxford,[1] where he was taught by Dr Thomas Holland. In 1593 he became a fellow of the college.[2] He graduated B.A. in 1594, M.A. in 1598, and D.D. in 1608. When Laud was going through his exercises as candidate for the degree of Bachelor in Divinity, in 1604, he contended “that there could be no true churches without diocesan episcopacy.” For this the young aspirant was sharply and publicly rebuked by Dr Holland, who presided on the occasion; and who severely reprehended the future Primate of All England as "one who sought to sow discord among brethren, and between the Church of England and the Reformed Churches abroad."[3] While he was an undergraduate, Laud's tutor was John Buckeridge, who became president of St John's College in 1605.[4]

When Buckeridge left St John's in 1611, Laud succeeded him as President, but only after a hard patronage struggle reaching high circles at court. The rival candidate, John Rawlinson, was chaplain to Lord Ellesmere, who was both Chancellor of the university and Lord Chancellor of England. Laud was chaplain to Richard Neile, who was Clerk of the Closet. Eventually King James brushed aside irregularities in the election, settling matters in Laud's favour.[5]

Laud became Dean of Gloucester in 1616. At Gloucester Cathedral he began ceremonial innovations with the communion table.[6] By local custom, the table stood in the middle of the choir, as was then usual in a parish church, rather than at the east end as was typical of cathedrals. Laud believed he had the king's blessing to renovate and improve the run-down building, but he offended his bishop, Miles Smith.[4]

Neile was Laud's consistent patron. Neile sought, but could not obtain, Laud's appointment as Dean of Westminster, a post that John Williams retained. But at the end of 1621, and despite the king's view of Laud as a troublemaker, Laud received the relatively unimportant see as Bishop of St David's.[5]

Laud became a confidant of George Villiers, 1st Duke of Buckingham, at the end of the reign. The Buckingham household employed John Percy (alias Fisher), a Jesuit, as chaplain, and the king wished to counter well-founded rumours that Percy was making Catholic converts there. In a three-day series of private debates with Percy in 1622, Laud was introduced to argue the Protestant case on the final day; pamphlets followed.[7] He then displaced John Preston as religious adviser to the Duke, a change that became clear around December 1624.[8] Historians believe Laud, who never married, had homosexual leanings, which he nevertheless seems to have managed discreetly. His private diary does contain evidence of erotic dreams he had about Buckingham and other men.[9] 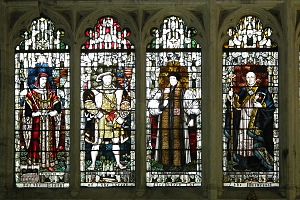 Laud ascended rapidly to a position of influence in the period 1626 to 1628, advancing not alone but with a group of like-minded clerics who obtained bishoprics.[10] In 1626 he was translated from St David's to be Bishop of Bath and Wells[1] and in September that year he took the court position of Dean of the Chapel Royal, vacant by the death of Lancelot Andrewes. A few days later, Buckingham told him outright that he was to succeed as Archbishop of Canterbury, when George Abbot died.[4] He immediately changed the Chapel services to privilege prayer over preaching, since King Charles's views were the opposite of his father's.[11]

Bishop of London, and "Thorough"

In July 1628 Laud was translated from Bath and Wells to become Bishop of London, in moves that followed on from the death of Andrewes. After this breakthrough in church politics, it becomes meaningful to define "Laudians" or "Lauders" as his followers.[12]

On the political stage, the personal rule of Charles I began in 1629 and Laud shortly became a key part of it, in alliance with Thomas Wentworth. Historian Mark Perry argues that by 1626 in private consultations with the king and Buckingham, and in his public role in the House of Lords, Laud was a highly effective parliamentarian and a key adviser and policy-maker.[13] Laud distrusted parliamentary bargaining, and was always determined to resist all encroachments upon the royal prerogative, especially in matters of taxation. His strong positions were the focus of attack during his trial in 1644.[14] When Wentworth was posted to Ireland in 1632, Laud brought his personal correspondence from him rapidly to the king's attention.[15] It is in this correspondence, in 1633, that the term "Thorough" appears.[16] In practical terms it meant the pursuit of ambitious policy objectives, on behalf of the king, disregarding special interests, and, particularly, legalistic prevarications.[17] There were opponents at court: Richard Weston, 1st Earl of Portland, Francis Cottington, 1st Baron Cottington and Queen Henrietta Maria.[18] Cottington observed that Laud could not keep his temper in Council meetings, and by 1637 Laud found he could not follow Wentworth in imagining their push for rigid policies would succeed.[19]

For more details on this topic, see Laudianism. 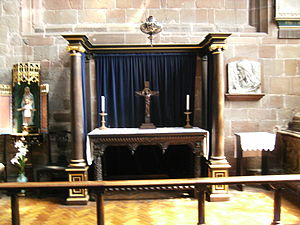 Altar, c. 1635, the centre of dispute between Puritans and Laudians, possibly consecrated by Laud himself

Laud was almost 60 years old when he became archbishop and, having waited for a decade to replace George Abbot, was no longer prepared to compromise on any aspect of his policy.[20] Abbot's chaplains had licensed Histriomastix for publication in 1630; the book which attacked English theatre and Christmas celebrations, among others, had caused scandal when it appeared in late 1632. One of Laud's early moves was to bring in his own men as censors: Samuel Baker (who was chaplain to William Juxon), William Bray and Matthew Weeks.[21][22] The operations of the censors, including William Haywood who joined them, became a focus of the Long Parliament as soon as it was convened in November 1640, and Laud ultimately had to answer for Haywood at his own trial.[23][24]

Whereas Wentworth (who became the Earl of Strafford in early 1640) saw the political dangers of Puritanism, Laud saw the Calvinist movement's threat to the episcopacy. But the Puritans themselves felt threatened: the Counter-Reformation was succeeding abroad and Protestants were not winning the Thirty Years' War. In this climate, Laud's high church policy could be seen as sinister. A year after Laud's appointment as Archbishop of Canterbury, the ship Griffin left for America, carrying religious dissidents such as Anne Hutchinson, the Reverend John Lothropp and the Reverend Zechariah Symmes.

Laud's desire to impose uniformity on the Church of England was driven by a belief that this was his office's duty, but his methods seemed persecution to those of differing views. Thus, they had the unintended consequence of garnering support for the most implacable opponents of the Anglican compromise. In 1637, Histriomastix's author, William Prynne, was convicted of seditious libel along with John Bastwick and Henry Burton, and had their ears cropped and faces branded. Prynne reinterpreted the "SL" ("Seditious Libeller") branded on his forehead as "Stigmata Laudis". Laud also moved to silence his critic among the bishops, John Williams, who was convicted of various offences in Star Chamber. Contrary to Laud's expectation, Williams refused to resign as Bishop of Lincoln, and the Lords forced his release, after which Williams supported the impeachment of both Strafford (Wentworth) and Laud. Williams specifically urged the king not to commute Strafford's death sentence, and he was executed in 1641, months before Charles I promoted Williams to Archbishop of York (only to be re-imprisoned by Parliament and then join the King in Yorkshire upon his release).

Toward the end of his life, Charles I admitted that he had put too much trust in Laud, and allowed his "peevish humours" and obsession with points of ritual to inflame divisions within the Church: he warned his son not to rely on anyone else's judgment in such matters. Laud, on his side, could not forgive the king for allowing Strafford's execution, and dismissed his royal master as "a mild and gracious Prince, that knows not how to be or be made great".[25]

For more details on this topic, see Trial of Archbishop Laud. 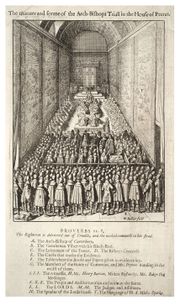 The Long Parliament of 1640 accused Laud of treason and, in the Grand Remonstrance of 1641, called for his imprisonment.[26] Laud was imprisoned in the Tower of London, where he remained throughout the early stages of the English Civil War. Apart from a few personal enemies like William Prynne (and possibly Archbishop Williams), Parliament showed little anxiety to proceed against Laud; given his age (68 in 1641), most members would probably have preferred to leave him to die of natural causes. In the spring of 1644 he was brought to trial which ended without a verdict: as with Strafford, it proved impossible to point to any specific action seen as treasonable.

Parliament took up the issue and eventually passed a bill of attainder, under which Laud was beheaded on Tower Hill on 10 January 1645, notwithstanding being granted a royal pardon.[27] Laud was buried in the chapel of St John's College, Oxford,[1] his alma mater.

Laud is remembered in the Anglican Communion with a commemoration on 10 January. His collected works in seven volumes were published between 1847 and 1860 in the Library of Anglo-Catholic Theology.[1]

Emeritus Professor at Cambridge, Patrick Collinson, an expert in Elizabethan Puritans, in 1980 published this rebuke of Laud in his book on the decades until 1625: "the greatest calamity ever visited upon the English Church".[28]