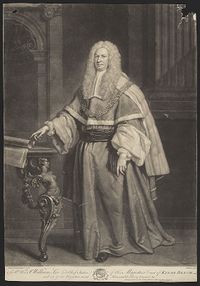 He was the second son of Sir Thomas Lee, 2nd Baronet. He matriculated at Wadham College, Oxford in 1704, shortly after entering the Middle Temple; he did not take a degree, but was called to the bar in 1710. Member of Parliament for Wycombe from 1727 until 1730, he gave up the seat when he became a Justice of the King's Bench.[1]

Lee was Lord Chief Justice of England and Wales from 8 June 1737 until his sudden death in 1754. He was appointed formally as Chancellor of the Exchequer as a temporary expedient on 8 March 1754, when Henry Pelham died, with his brother Sir George Lee as Under Treasurer of the Exchequer, until April 6, his own death.[1]

Lord Campbell noted that Lee "certainly stood up for the rights of woman more strenuously than any English judge before or since his time".