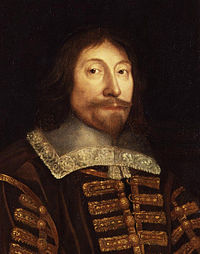 William Lenthall (1591 – 9 November 1662) was an English politician of the Civil War period. He served as Speaker of the House of Commons.

The second son of William Lenthall of North Leigh in Oxfordshire, a descendant of an old Herefordshire family, he was born at Henley-on-Thames. Educated at Lord Williams's School, he later left Oxford without taking a degree in 1609, and was called to the bar at Lincoln's Inn in 1616, becoming a bencher in 1633.[1]

He represented Woodstock in the Short Parliament (April 1640) and Long Parliament (November 1640), for which latter Parliament he was chosen by King Charles I to be Speaker. According to Edward Hyde, 1st Earl of Clarendon, a worse choice could not have been made, for Lenthall was of a very timorous nature. He was treated with little respect, and was unable to control the proceedings.[1]

On 4 January 1642, however, when King Charles I entered the House of Commons to seize five 'disruptive' members, Lenthall behaved with great prudence and dignity. Having taken the speaker's chair and looked round in vain to discover the offending members, Charles turned to Lenthall standing below, and demanded of him whether any of those persons were in the House, whether he saw any of them and where they were. Lenthall fell on his knees and replied: "May it please your Majesty, I have neither eyes to see nor tongue to speak in this place but as the House is pleased to direct me, whose servant I am here".[1] 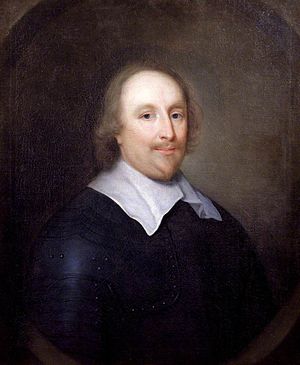 A portrait of William Lenthall by Cornelis Janssens van Ceulen

On the outbreak of war, Lenthall threw in his lot with Parliament. He had already called attention to the inadequacy of his salary and been granted a sum of £6,000 (9 April 1642); and he was now appointed Master of the Rolls (22 November 1643), and one of the Commissioners of the Great Seal (October 1646 – March 1648). He carried on his duties as speaker without interruption till 1647, when the power of parliament had been transferred to the army. On 26 July, a mob invaded the House of Commons and obliged it to rescind the ordinance re-establishing the old parliamentary committee of militia; Lenthall was held in the chair by main force and compelled to put to the vote a resolution inviting the king to London. Threats of worse things came subsequently to Lenthall's ears, and, taking the mace with him, he left London on 29 July to join the army and Lord Fairfax. Lenthall and Edward Montagu, 2nd Earl of Manchester, the speaker of the Lords, headed the fugitive members at the review on Hounslow Heath on 3 August, and were well received by the soldiers. Returning to London with the army, he was installed again by Fairfax in the chair (6 August), and all votes passed during his absence were annulled. He adhered thenceforth to the army party, but with a constant bias in favour of the king.[1]

At the Restoration he claimed to have sent money to the king at Oxford, to have provided the queen with comforts and necessaries and to have taken care of the royal children. Having put the question for the king's trial from the chair, he continued to act as speaker after the king's execution, though he used his influence in favour of the royalists, whenever this was possible without imperilling his own interests, and he saved the lives of both the Earl of Norwich (8 March 1649) and Sir William Davenant (3 July 1650) by his casting vote. The removal of the king had left the parliament supreme; and Lenthall as its representative, though holding little real power, was the first man in the state.[1]

His speakership continued till 20 April 1653, when the Long Parliament was summarily expelled. Oliver Cromwell directed Colonel Thomas Harrison, on the refusal of Lenthall to quit the chair, to pull him out and Lenthall submitted to the show of force. He took no part in politics till the assembling of the First Protectorate Parliament, on 3 September 1654, in which he sat as member for Oxfordshire . He was again chosen speaker, his former experience and his pliability of character being his chief recommendations.

In the second protectorate parliament, summoned by Cromwell on 17 September 1656, Lenthall was again chosen member for Oxfordshire, but had some difficulty in obtaining admission, and was not re-elected speaker. He supported Cromwell's administration, and was active in urging the protector to take the title of king. In spite of his services, Lenthall was not included by Cromwell in his new House of Lords, and was disappointed at his omission. The protector, hearing of his complaint, sent him a writ, and Lenthall was elated at believing he had secured a peerage.[1]

After Cromwell's death, the officers, having determined to recall the Rump Parliament, assembled at Lenthall's house at the Rolls (6 May 1659), to ask him to send out the writs. Lenthall, however, had no wish to resume his duties as speaker, preferring the House of Lords, and made excuses for not complying. When the officers threatened to summon parliament without his aid, he led the procession to the parliament house. Lenthall was now restored to the position of dignity which he had filled before. He was temporarily made keeper of the new Great Seal (14 May). On 6 June it was voted that all commissions should be signed by Lenthall and not by the commander-in-chief. His exalted position, however, was not left long unassailed. On 13 October John Lambert placed soldiers round the House and prevented the members from assembling. Lenthall's coach was stopped as he was entering Old Palace Yard, the mace was seized and he was obliged to return. The army, however, soon returned to their allegiance to the parliament. On 24 December, they marched to Lenthall's house, and expressed their sorrow. On 29 December, the speaker received the thanks of the reassembled parliament.[1]

Restoration of the Monarchy 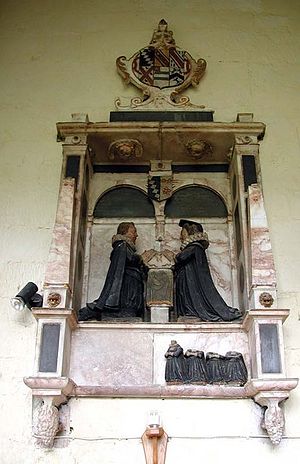 A memorial in the chancel of St Mary's Church, North Leigh to William Lenthall

Lenthall now supported the Restoration. He strongly opposed the oath abjuring the House of Stuart, sought by the republican faction in parliament, and absented himself from the House for ten days, to avoid any responsibility for the bill. He had been in communication with George Monck for some time, and on Monck entering London with his army (3 February 1660) Lenthall met him in front of Somerset House. On 6 February Monck visited the House of Commons, when Lenthall pronounced a speech of thanks.[1]

On 28 March, Lenthall forwarded to the king a paper containing Heads of Advice. According to Monck, "he was very active for the restoring of His Majesty and performed many services ... which could not have been soe well effected without his helpe".[1] Lenthall notwithstanding found himself in disgrace at the Restoration. In spite of Monck's recommendation, he was not elected by Oxford University for the Convention Parliament, nor was he allowed by the king, though he had sent him a present of £3,000, to remain Master of the Rolls.[1]

On 11 June, he was included by the House of Commons, in spite of a recommendatory letter from Monck, among the twenty persons excepted from the Act of Indemnity and subject to penalties not extending to life. In the House of Lords, however, Monck's testimony and intercession were effectual, and Lenthall was only declared, in the Act of Indemnity, incapable of holding for the future any public office. In his last public act, he consented to appear as a witness against the regicide Thomas Scot, for words spoken in the House of Commons while Lenthall was in the chair. It was probably after this that he was allowed to present himself at court, and his contemporaries took a malicious glee in telling how, when, with some difficulty, he obtained leave to kiss the king's hand he, out of guilt, fell backwards, as he was kneeling.[1]

He died at the Besselsleigh on 9 November 1662. In his will, Lenthall asked to be buried without any state and without a monument, 'acknowledging myself to be unworthy of the least outward regard in this world and unworthy of any remembrance that hath been so great a sinner'. The most he would permit was a plain stone carved with the Latin inscription Vermis sum, which means: I am a worm.[1]

The anonymous author of Lenthall's biography in the Encyclopaedia Britannica Eleventh Edition (1911) wrote that he was held in little honour by his contemporaries, and was universally regarded as a time-server. He was however a man of good intentions, strong family affections, and considerable ability. Unfortunately he was called by the irony of fate to fill a great office, in which, governed constantly by fears for his person and estate, he was seduced into a series of unworthy actions.[2] 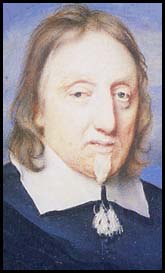 Lenthall married Elizabeth (died in April 1662), daughter of Ambrose Evans of Loddington, Northamptonshire.[3] He left one son John Lenthall (1624/5–1681). His brother Sir John Lenthall, who it was said had too much influence with William, was notorious for his extortions as Keeper of the King's Bench prison.[4]

William Lenthall had two chief residences, Burford Priory, still standing, in Oxfordshire and Besselsleigh Manor in Berkshire (now Oxfordshire). In 1637, he bought Burford from Lord Falkland.[5] Lenthall was one of the overseers of the will of Sir Lawrence Tanfield, Lord Falkland's grandfather and had married into Tanfield's second wife's family.[6] Additions and modifications to the house were made by William Lenthall.[7] It remained in the Lenthall family for several hundred years.

Lenthall had an extensive collection of paintings. Some of these may have been at Burford when he purchased it. Some were family portraits. He may also have acquired paintings from the royal collection following the execution of Charles I.[8] The collection remained in the family for many years, but was sold by Christie's in 1833.