Lever started work at his father's grocery business in Bolton but, as a businessman, he is noted for founding the soap and cleaning product firm, Lever Brothers, with his younger brother James in 1885. He began manufacturing Sunlight Soap and built a business empire with many well-known brands, such as Lux and Lifebuoy. In politics, Lever sat as a Liberal MP for Wirral and then as a Peer (as Lord Leverhulme). He was an advocate for expansion of the British Empire, particularly in Africa and Asia, which supplied palm oil, a key ingredient in Lever's product line.

William Lever was born on 19 September 1851 at 16 Wood Street, Bolton, Lancashire, England. He was the eldest son and the seventh child born to James Lever (1809–1897), a grocer, and Eliza Hesketh, daughter of a cotton mill manager. He was educated at Bolton Church Institute between 1864 and 1867 and worked in the family grocery business from 1867 until he was given junior partnership in 1872.

Lever was a member of the Congregationalist Church and applied its ideals in his business life.[1] On 17 April 1874, he married Elizabeth Ellen Hulme, daughter of a draper and neighbour from Wood Street, at the Church of St Andrew and St George (then Congregational, now United Reformed) in Bolton. William, their only surviving child, was born at Thornton Hough in 1888.

Lever moved to Thornton Hough in 1888 and bought Thornton Manor in 1893. He subsequently bought the village which he developed as a model village. His London home was The Hill at Hampstead, bought in 1904. He bought and demolished neighbouring Heath Lodge in 1911 to extend the garden.[2] The Hill was his main home from 1919.[1][3] In 1899 he bought Rockhaven in Horwich and the Rivington estate in early 1900. He built a wooden bungalow on the slopes of Rivington Pike in 1902 which was burned down in an arson attack in 1913 by suffragette, Edith Rigby.[4] Its stone replacement was his summer home until his death.

Lever began collecting artworks in 1893 when he bought a painting by Edmund Leighton.[5] He founded the Lady Lever Art Gallery in 1922, dedicated to his late wife.[6]

In his later years, Leverhulme became deaf and kept a klaxon horn by his bed to wake him at 5 am. He took up ballroom dancing late in life. Throughout his life he thought the only healthy way to sleep was outdoors in the wind and the rain.[7]

Leverhulme was involved with freemasonry and by 1902 was the first initiate of a lodge bearing his name, William Hesketh Lever Lodge No. 2916. He later formed Leverhulme Lodge 4438. He saw freemasonry as a tool to reinforce the hierarchy within Lever Brothers.[8] He was a founder of the Phoenix Lodge 3236 whilst an M.P in 1907[9] and a founder of St. Hilary Lodge No. 3591 founded 4 May 1912, then Past Pro-Grand Warden (P.P.G.W) and Immediate Past Master (I.P.M).[10] He was appointed Senior Grand Warden of the Grand Lodge of Mark Master Masons of England in 1919 and co-founded a number of lodges.[11] He was Provincial Senior Grand Warden of the Provincial Grand Lodge of Cheshire.[12]

Lord Leverhulme died aged 74 of pneumonia at his home in Hampstead on 7 May 1925.[1] His funeral was attended by 30,000 people.[13] He is buried in the churchyard of Christ Church in Port Sunlight, Cheshire.[14]

After working for his father's wholesale grocery business, in 1886 he established a soap manufacturing company, Lever Brothers, with his brother James. It is now part of Unilever. It was one of the first companies to manufacture soap from vegetable oils, and with Lever's business acumen and marketing practices, produced a great fortune.

In 1887, Lever looking to expand his business, bought 56 acres (230,000 m2) of land on the Wirral in Cheshire between the River Mersey and the railway line at Bebington. This site became Port Sunlight where he built his works and a model villageto house its employees. From 1888, Port Sunlight village offered decent living conditions in the belief that good housing would ensure a healthy and happy workforce. The community was designed to house and support the workers. Life in Port Sunlight included intrusive rules and implied mandatory participation in activities. The tied cottages meant that a worker losing his or her job could be almost simultaneously evicted.[15] Even workers' social lives were policed from the head office. W.H Lever stated "a good workman may have a wife of objectionable habits, or may have objectionable habits himself, which make it undesirable for us to have him in the village."[16]

File:Soaptrust.jpg
Cartoon from The Daily Mirror, 22 October 1906. A parody of William Lever, whose factory was named "Port Sunlight".

Lever's rival in the soap industry was A & F Pears. Andrew Pears had taken the lead in using art for marketing by buying paintings such as "Bubbles" by John Everett Millais to promote its products, which Lever also wanted to do. in 1886. Three years later Lever bought 'The New Frock' by William Powell Frith to promote his firm's product Sunlight soap.[17]

In 1906 Lever, together with Joseph Watson of Leeds and several other large soap manufacturers, established a monopoly soap trust, in imitation of similar combinations established in the USA following John D. Rockefeller's organisation of the Standard Oil Co. as a trust in 1882. Lever believed such an organisation would bring benefits to the consumer as well as the manufacturer, through economies of scale in purchasing and advertising. The scheme was launched when President Roosevelt had just launched his trust-busting policy in America.

The British press, in particular the Daily Mail, of which he had been one of the largest advertising customers, was virulently opposed to the scheme, and aroused popular hostility urging a boycott of trust brands and making what were later proved in court to be libellous assertions as to the constituent ingredients of the soaps concerned. All participants in the trust suffered severe damage to their profits and reputations. Lever estimated his loss at "considerably over half a million" combined with a reduction by a third in the value of his shareholding, and the scheme was abandoned before the year's end.[18]

In the early 1900s, Lever was using palm oil produced in the British West African colonies. When he found difficulties in obtaining more palm plantation concessions, he started looking elsewhere in other colonies. In 1911, Lever visited the Belgian Congo to take advantage of cheap labour and palm oil concessions in that country.[citation needed]

Lever's attitudes towards the Congolese were paternalistic and by today's standards, racist, and his negotiations with the Belgian coloniser to enforce the system known as travail forcé (forced labour) are well documented in the book Lord Leverhulme's Ghosts: Colonial Exploitation in the Congo by Jules Marchal [ISBN 978-1-84467-239-4] in which the author states: "Leverhulme set up a private kingdom reliant on the horrific Belgian system of forced labour, a program that reduced the population of Congo by half and accounted for more deaths than the Nazi holocaust." As such, he participated in this system of formalised labour. The archives show a record of Belgian administrators, missionaries and doctors protesting against the practices at the Lever plantations. Formal parliamentary investigations were called for by members of the Belgian Socialist Party, but despite their work the practice of forced labour continued until independence in 1960.[19]

In May 1918 in semi-retirement, Lever bought the Isle of Lewis, in the Outer Hebrides of Scotland, with the intention of reviving the fishing industry, by making Stornoway an industrial town with a fish cannery. The product would have been distributed and sold by 400+ shops belonging to Mac Fisheries, the fish mongers he bought from 1918 onwards. His plans were initially popular, but he was opposed to land resettlement, and this led to land raids (described under Coll, their main setting).[citation needed]

The government promised land to returning demobilised First World War veterans, and they sided against Lever who abandoned his plans for Lewis. After offering to give Lewis to its people in 1923, he was turned down and sold it to absentee landlords. He concentrated his efforts on Harris, where the town Leverburgh took his name. Lever bought an estate in Harris in 1919 for £56,000 but this plan floundered after his death, and his executors sold an estimated £500,000 investment for £5,300.[citation needed] 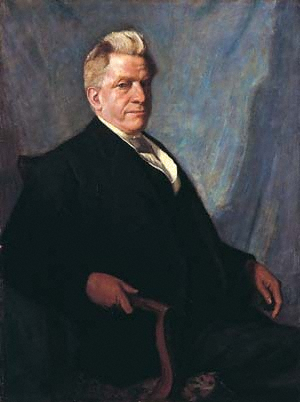 William Lever, 1st Viscount Leverhulme, in a portrait painted in 1918 by William Strang

Lever was a lifelong supporter of William Ewart Gladstone and Liberalism. He was invited to contest elections for the Liberal Party. He served as Member of Parliament (MP) for the Wirral constituency between 1906 and 1909 and used his maiden speech in the House of Commons to urge Henry Campbell-Bannerman's government to introduce a national old age pension, such as the one he provided for his workers. On the recommendation of the Liberal Party, he was created a baronet in 1911 and raised to the peerage as Baron Leverhulme on 21 June 1917, the "hulme" element of his title being in honour of his wife.

In November 1918 Lord Leverhulme was invited to become Mayor of Bolton though he was not a councillor because the council wanted to honour a "Notable son of the Town" as a mark of the high regard the citizens of Bolton had for him.[20] He was High Sheriff of Lancashire in 1917. He was elevated to the viscountcy on 27 November 1922.[1]

Lever was a major benefactor to his native town, Bolton, where he was made a Freeman of the County Borough in 1902. He bought Hall i' th' Wood, one time home of Samuel Crompton, and restored it as a museum for the town. He donated 360 acres (1.5 km2) of land and landscaped Lever Park in Rivington in 1902. Lever was responsible for the formation of Bolton School after re-endowing Bolton Grammar School and Bolton High School for Girls in 1913. He donated the land for Bolton's largest park, Leverhulme Park, in 1914.[21]

Leverhulme endowed a school of tropical medicine at Liverpool University, gave Lancaster House in London to the British nation and endowed the Leverhulme Trust set up to provide funding for publications of education and research. The garden of his former London residence 'The Hill' in Hampstead, designed by Thomas Mawson, is open to the public[22] and has been renamed Inverforth House.[23] A blue plaque at Inverforth House commemorating Leverhulme was unveiled by his great-granddaughter, Jane Heber-Percy, in 2002.[24]

He built many houses in Thornton Hough which became a model village comparable to Port Sunlight[25] and in 1906 built Saint Georges United Reformed Church.[26] The Lady Lever Art Gallery opened in 1922 and is in the Port Sunlight conservation area. In 1915 Lever acquired a painting entitled "Suspense" by Charles Burton Barber (an artist who came to resent 'manufacturing pictures for the market'). The painting was previously owned by his competitor, A & F Pears, who used paintings such as "Bubbles" by John Everett Millais to promote its products. Much of Leverhulme's art collection is displayed in the gallery which houses one of the finest formed by an industrialist in England.[5]

A.N. Wilson from the Mail Online, January 2010, remarked, "The altruism of Leverhulme or the Cadbury family are in sad contrast to the antisocial attitude of modern business magnates, who think only of profit and the shareholder."[27]

William Lever made the celebrated quote about advertising, "I know half my advertising isn't working, I just don't know which half."[28]