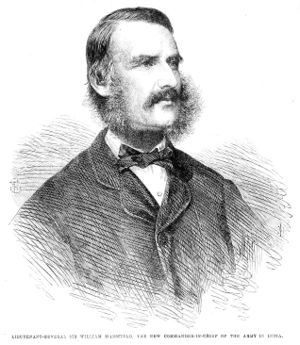 Portrait from the Illustrated London News 13 May 1865

Mansfield was born in Ruxley, Kent, the fifth of the seven sons of John Mansfield of Diggeswell House in Hertfordshire, and his wife, daughter of General Samuel Smith of Baltimore in the United States.[1] His grandfather was the prominent lawyer Sir James Mansfield, Solicitor General from 1780 to 1782 and in 1783 and Chief Justice of the Common Pleas from 1804 to 1814.[1]

In 1854, he married Margaret Fellowes, who became a noted suffragist and spiritualist after his death.

In 1855, during the Crimean War, Mansfield was appointed military adviser to the Ambassador at Constantinople Lord Stratford de Redcliff, and accompanied him to the Crimea.[1] He then returned to India and served as Chief-of-Staff during the Indian Mutiny campaign from 1857 to 1859, initially with the local rank of major-general. His role during the Siege of Lucknow in November 1857 saw his appointment as Knight Commander of the Order of Bath (KCB) in March 1858.[1][7] Promoted to major-general on 18 May 1858, he served as Commander-in-Chief of the Bombay Army from 1860 to 1865 and as Commander-in-Chief, India from 1865 to 1870.[1][8] During this time, he was made Knight Grand Commander of the Order of the Star of India (GCSI)[9] and subsequently Knight Grand Cross of the Order of the Bath (GCB).[10] Mansfield was then Commander-in-Chief, Ireland from 1870 to 1875.[1] He was promoted to full general on 23 May 1872.[11]

In 1871 he was admitted to the Irish Privy Council[1] and raised to the peerage as Baron Sandhurst, of Sandhurst in the County of Berkshire.[12]