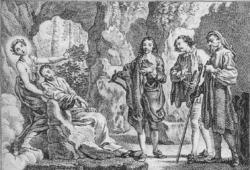 The death of Alexander Pope from Museus, a threnody by Mason, published in 1747

He was born in Hull and educated at Hull Grammar School and St John's College, Cambridge.[1] He was ordained in 1754 and held a number of posts in the church.

In 1747 his poem "Musaeus, a Monody on the Death of Mr. Pope" was published to acclaim and quickly went through several editions.[2] Summarizing this poem, a threnody, William Lyon Phelps writes:

Among his other works are the historical tragedies Elfrida (1752) and Caractacus (1759) (both used in translation as libretti for 18th century operas: Elfrida - Paisiello and LeMoyne, Caractacus - Sacchini (as Arvire et Évélina) and a long poem on gardening, The English Garden (three volumes, 1772–82). His garden designs included one for the 2nd Earl of Harcourt. He published the Poems of Mr Gray, a friend who was a great influence on his own work, in 1775. In 1785 he was William Pitt the Younger's choice to succeed William Whitehead as Poet Laureate but refused the honour.

Memorial inscriptions for Mason may be found at the parsonage he built at Aston near Rotherham,[clarification needed] at Poet's Corner in Westminster Abbey and in York Minster.[3]