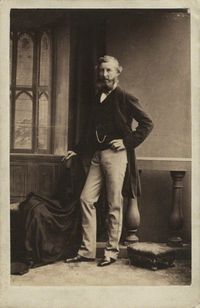 William Montagu was born at Kimbolton Castle in 1823. He was the eldest son of George Montagu, 6th Duke of Manchester. His mother was Millicent Sparrow, daughter of Brig. Gen. Robert Bernard Sparrow of Brampton Park, Huntingdonshire.[1]

He joined the Canterbury Association on 27 May 1848. It was Edward Gibbon Wakefield's hope that Lord Mandeville would emigrate and be the aristocratic leader in the colony, but he did not go to New Zealand. Lord Mandeville and his grandmother, Lady Olivia Sparrow, both bought land in Riccarton, though. Between them, they held 500 acres (200 ha). Mandeville North near Kaiapoi is named after Lord Mandeville.[1]

He first had a son to Sarah Maria Morris[citation needed]. When Sarah was 8 months pregnant, the Montagu Family had her married off to Samuel Palmer on 4 March 1850[citation needed]. When the child was born on the 10 May 1850, he was named William Edward Palmer. William Edward Palmer married Emma Prentice on 24 December 1873 at Harrold, Bedfordshire.