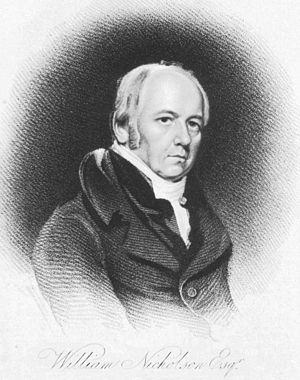 William Nicholson (13 December 1753 – 21 May 1815) was a renowned English chemist and writer on "natural philosophy" and chemistry, as well as a translator, journalist, publisher, scientist, inventor, patent agent and civil engineer.

The year of Nicholson's birth in London has been recorded but, as was common in the 18th century, the day and month remained undocumented. He was educated in Yorkshire, and after leaving school, he made two voyages as a midshipman in the service of the British East India Company. His first ship was called The Boston and the second ship was The Gatton.

Subsequently, having become acquainted with Josiah Wedgwood in 1775, he moved to Amsterdam, where he made a living for a few years as agent for the sale of pottery.

On his return to England he was persuaded by Thomas Holcroft to apply his writing talents to the composition of light literature for periodicals, while also assisting Holcroft with some of his plays and novels. Meanwhile, he devoted himself to the preparation of An Introduction to Natural Philosophy, which was published in 1781 and was at once successful. A translation of Voltaire's Elements of the Newtonian Philosophy soon followed, and he then entirely devoted himself to scientific pursuits and philosophical journalism.

In 1784 he was proposed by Josiah Wedgwood (the current Chairman) and appointed as secretary to the General Chamber of Manufacturers of Great Britain, and he was also connected with the Society for the Encouragement of Naval Architecture, established in 1791. He gave much attention to the construction of various machines for comb-cutting, file-making, cylinder printing and other uses—he also invented an areometer.

On 12 December 1783, Nicholson was elected to the "Chapter Coffee House Philosophical Society". He was proposed by Jean-Hyacinthe Magellan and seconded by horologist John Whitehurst.[1]

Nicholson communicated to the Royal Society in 1789 two papers on electrical subjects. In the same year he reviewed the controversy which had arisen over Richard Kirwan's essay on phlogiston, and published a translation of the adverse commentaries by the French academicians (Lavoisier, Monge, Berthollet, and Guyton de Morveau) as ‘An Essay on Phlogiston, to which are added Notes.’[2]

In 1797 he began to publish and contribute to the Journal of Natural Philosophy, Chemistry and the Arts, generally known as Nicholson's Journal, the earliest monthly scientific work of its kind in Great Britain— the publication continued until 1814. The journal included the first comprehensive descriptions of aerodynamics with George Cayley's "On Aerial Navigation",[3] which inspired the Wright brothers[4] a hundred years later.

In 1799 he established a school in London's Soho Square, where he taught natural philosophy and chemistry, with the aid of a grant of £1,500 from Thomas Pitt.

In May 1800 he with Anthony Carlisle discovered electrolysis, the decomposition of water into hydrogen and oxygen by voltaic current. The two were then appointed to a chemical investigation committee of the new Royal Institution. But his own interests shortly turned elsewhere.[5][6]

Besides considerable contributions to the Philosophical Transactions, Nicholson wrote translations of Fourcroy's Chemistry (1787) and Chaptal's Chemistry (1788), First Principles of Chemistry (1788) and a Chemical Dictionary (1795); he also edited the British Encyclopaedia, or Dictionary of Arts and Sciences (6 vols., London, 1809).

During the later years of his life, Nicholson's attention was chiefly directed to water supply engineering at Portsmouth, at Gosport and in Hammersmith. William Nicholson died in Bloomsbury at the age of 61 on 21 May 1815, attended by Sir Anthony Carlisle.