William Pitt (4 June 1855 – 25 May 1918) was an architect, public servant and politician working in Victoria, Australia, in the later part of the 19th century and early 20th century.

Although some of his grandest buildings have since been demolished including the Melbourne Coffee Palace (1879) and the Federal Coffee Palace (1888), some examples of Pitt's architectural work remains today and he is still strongly associated with the boom era of Marvellous Melbourne.

Pitt's roots were in the suburb of St Kilda, he lived, was educated there and lived there for some time and one of his finest contributions and surviving architectural works, the St Kilda Town Hall is one of the landmarks of the area (although his original vision for the building was never fully realised).

Pitt began his own architectural practice in 1879 and he became highly sought after during the land boom in Melbourne, working almost solely in commercial architecture and becoming one of the a prolific proponent of eclecticism, in particular the Gothic revival and Second Empire styles of architecture. His legacy can be seen in grand commercial buildings lining Collins Street, Melbourne.

Pitt was also renowned in Australasia as a specialist in theatre design, particularly in interiors with works in Melbourne, Ballarat, Sydney, Adelaide, Wellington and Auckland. Some declared him at the time to be the greatest theatre architect in Australia.[1]

William Pitt was born in 1855 in Melbourne[2] two years after his parents William Pitt, an artist, and Jane, née Dixon emigrated to Australia from Sunderland in England. He was raised in the suburb of St Kilda and was educated at the Hofwyl School in St Kilda and later attended George Henry Neighbour's college in Carlton.[2] He later moved to the suburb of Abbotsford. 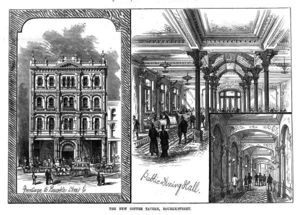 Melbourne Coffee Palace in 1881 (since demolished) including interiors) was one of Pitt's earliest known works. 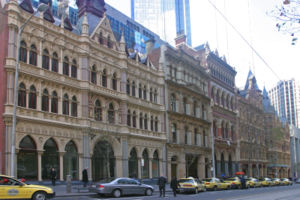 Pitt's Collins Street legacy. Some examples pictured include the Olderfleet building (left), the Rialto (far right) and his largest building, the Federal Coffee Palace which once stood on the south western corner of Collins and King Streets nearby
File:Stock exchange melbourne 1891.jpg
Pitt's Venetian Gothic design for the Melbourne Stock Exchange
File:Olderfleet roof designs.jpg
Pitt's details for the roof and tower fleche of the Olderfleet buildings

Pitt began his architecture career as an understudy in 1875.

He began his own architectural practice in 1879 and got his first break with the major commission for the Melbourne Coffee Palace (1879) located on Bourke Street (between Swanton and Russell) which he was awarded as first prize of an architectural competition.[2] In 1880, Pitt was again awarded first prize for his design of Queens Bridge over the Yarra River.

These buildings and the Premier Permanent Building Society on Collins Street showed an early preference for classically inspired styles.

He received an award for his design of the Gordon House apartments which he designed in 1883 (1884) in Little Bourke Street. It was the first of his designs to flirt with the gothic style.

Pitt began to work in theatres in the mid-1880s, with his greatest, the Princess Theatre (1886) in the Second Empire style, in Spring Street being one of the few to have survived. His concept for the theatre's sliding roof was a world first.

In 1887, Pitt was appointed vice-president of the Victorian Institute of Architects. It was during this time that the size of his projects significantly increased and he was given the freedom to experiment with eclecticism and in particular the gothic style. It followed that his largest commission and most ambitious design was the Federal Coffee Palace at the south-west corner of King Street and Collins Street. While he received a second prize for his design, he was allowed to collaborate with the winners, Ellerker & Kilburn and the result was a composite design. The massive and outlandish building had references to numerous architectural styles and was both hailed and criticised for its extraordinary ebullience. Although Pitt was a joint architect, many attribute the design to him, feeling that his ideas had a dominant influence. The building came to epitomise the speculative land boom which was 'Marvellous Melbourne' of the late 1880s and it was completed in 1888.

Pitt's extensive work in Gothic revival featured some surviving examples in the Venetian Gothic idiom. The Olderfleet (1888) the nearby Old Stock Exchange (1888) and Rialto Buildings (1889) in Collins Street are on the Victorian Heritage Register. His polychromatic design of the 3 storey Denton Hat Mills (1888) in Abbotsford, Victoria began his specialisation in warehouse architecture. He was also credited with the design of Brunswick Town Hall in 1889.

In 1890, the Venetian gothic Old Safe Deposit Building on Queen Street was to follow, and the Markilles Hotel on Flinders Street. Also Collendida Homestead at Corowa NSW for Henry Hay Esq.

Pitt suffered a massive financial setback during the financial crisis of 1890, during which he declared bankruptcy. Nevertheless, he was made commissioner Melbourne Board of Works 1891.

Tower House (1891), a fanciful combination of Tudor, Queen Anne and Mannerist styles was once a landmark on the corners of Spring and Flinders Streets.

In 1892, he showed his passionate support for the Collingwood Football Club by designing a grandstand for Victoria Park for free.

He followed with the distinctively castellated design of the Victoria Brewery (1896) on Victoria Parade in East Melbourne.

Throughout his life, Pitt had strong political aspirations. He was known to participate in various fraternities including being an active member of the Australian Natives' Association and also the Freemasons.

He was first elected to the City of Collingwood's council in 1888 and became mayor in 1890 and served also in 1891 before retiring from council in 1894.

He was also a member of the Victorian Legislative Council North Yarra Province between 1891 and 1904 and for the Eastern Province in 1904-10.[3] Pitt was a vocal supporter of the Australian Federation Movement.

Pitt was made chairman of the Melbourne Harbor Trust in 1901 and served until 1905.

He made a rare foray into residential architecture with the design of Avalon Mansion (1903) at 70 Queens Road.[4] He also redesigned the interior of Her Majesty's Theatre, Sydney in 1903.

His design throughput increased at the turn of the decade and among his subsequent projects included surviving buildings such as the Empire Works (later Bryant and May factory) (1909) in inner suburban Richmond, the Victorian Racing Club (1910) on Collins Street (demolished), Wellington Opera House (1911) and Sir Charles Hotham Hotel (1912), which survives on the corner of Spencer and Flinders Streets as a backpacker hostel.

Pitt married Elizabeth Mary Liddy on 23 October 1889 at St Peter's Church. Pitt died on 25 May 1918 in Abbotsford. On his request, he was buried in St Kilda General Cemetery.