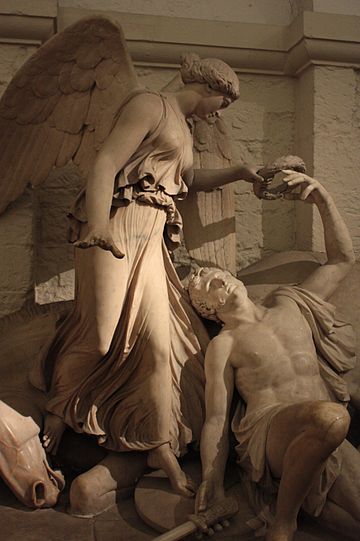 Major-General Sir William Ponsonby KCB (13 October 1772 – 18 June 1815), styled The Honourable from 1806, was an Irish politician and British Army officer who served in the Peninsula War and was killed at the Battle of Waterloo.

He was the second son of William Ponsonby, 1st Baron Ponsonby of Imokilly and Hon. Louisa Molesworth. Educated at Kilkenny and Eton, he married Hon. Georgiana FitzRoy, youngest daughter of Charles FitzRoy, 1st Baron Southampton.[1] Between 1796 and 1798, Ponsonby sat as a Member of Parliament (MP) in the Irish House of Commons and represented Bandonbridge. Subsequently he stood for Fethard (County Tipperary) and held this seat until the Act of Union in 1801. He entered the British House of Commons in 1812, sitting for Londonderry until his death. In 1815, he was appointed a Knight Commander of the Order of the Bath (KCB).

When Ponsonby's command, the 5th Dragoon Guards, arrived in the Peninsula in October 1811, it became part of John Le Marchant's heavy cavalry brigade.[2] For the rest of the war, this brigade included the 5th Dragoon Guards and the 3rd and 4th Dragoons. Ponsonby took part in Le Marchant's famous charge at the Battle of Salamanca in July 1812. On that occasion, the British heavy dragoons rode down one French infantry division and part of a second before being repulsed.[3] Upon Le Marchant's death in the battle, Ponsonby took over the brigade, participating in the campaign that included the Siege of Burgos.[4] In 1813, Ponsonby led his 1,200-strong cavalry brigade at the Battle of Vitoria. During the Battle of the Pyrenees and the fall campaigns in the mountains, the Duke of Wellington sent the bulk of his cavalry to the rear. On 25 January 1814, Ponsonby took leave of his brigade and in the final battles in France, Lord Charles Manners exercised command.[5]

Ponsonby's part in the Battle of Waterloo is remembered because it highlights some pertinent points about cavalry charging. Ponsonby was in command of the Union Brigade, so-called because it included an English, a Scottish and an Irish regiment. The brigade consisted of the 1st Royal and 6th Inniskilling Regiments of Dragoons in the first line and the 2nd Royal North British Dragoons (Scots Greys) in reserve. It had counter-attacked to great effect against the disorganised French columns of Drouet D'Erlon's I Corps. Carried away by their initial success, however, the brigade failed to rally and continued towards the French positions. The Scots Greys in particular, forgetting their supporting role and ignoring the “recall”, charged on in disordered groups, some of whom reached the French guns on the other side of the valley. By this time their horses were blown and a swift retribution followed in the shape of a counter-attack by the French Lancers. The brigade suffered very heavy losses (see table below), being effectively destroyed, and it played no further part in the battle. Ponsonby, who was mounted on a horse of less value than the best one in his stable, rode too far and with his horse mired in mud near to enemy lines was set upon by French Lancers.[6] Recognising his rank and worth as a prisoner the French beckoned on him to surrender, but he didn't understand them. Then when a group of his own Union Brigade spotted him and rode to his rescue, the Lancers from one of the French line regiments (either the 3rd Lancers or 4th Lancers) attached to d'Erlon's I Corps were left with no option but to kill him.[7] Myths growing up after the battle turned this into a guardsman from the "Red Lancers", which included the surviving squadron of the Polish lancers of the Guard.[8] Following Ponsonby's death, command of the Union Brigade devolved upon Lieutenant-Colonel Arthur Clifton of the 1st Royal Dragoons.[9]

Ponsonby has a large marble monument at the west end of the crypt of St Paul's Cathedral in London.

In the 1970 film Waterloo, Ponsonby was played by Michael Wilding.

William Ponsonby should not be confused with his second cousin, Frederick Cavendish Ponsonby, a British cavalry officer who also served in the Peninsular War and although very severely wounded at the Battle of Waterloo survived.