William Rainey Harper (July 24, 1856 – January 10, 1906) was one of the leading American academic leaders of the late 19th century and the early 20th century. Harper helped to establish both the University of Chicago and Bradley University, and he served as the first presidents of both institutions.

Harper was born on July 24, 1856, in New Concord, Ohio1, to parents of Irish-Scottish ancestry.[2] Very early in his life, Harper displayed skills years ahead of other children of his age, and he was labeled a child prodigy. By the age of eight, Harper began preparing for college-level courses. At the age of ten he enrolled in Muskingum College in his native New Concord, Ohio. At the age of fourteen, he graduated from Muskingum College. In 1872, Harper enrolled in Yale University to begin his postgraduate studies, and he completed these in 1876. Harper quickly assumed a series of faculty positions, including ones at Denison University and Yale University. Throughout his academic life, Harper wrote numerous textbooks. A strong supporter of lifelong learning, Harper was also involved with the Chautauqua Institution in Chautauqua, New York, and its academic programs starting in 1883.[3] 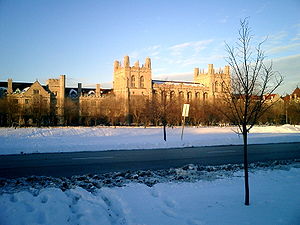 Harper Library at the University of Chicago

As University of Chicago president

In 1891, John D. Rockefeller selected thirty-five-year-old Harper to assist in organizing the University of Chicago, and shortly thereafter, he was selected as the university's first president. In hiring the faculty the new university and selecting its students, Harper set standards quite high. Harper elevated the salaries of the faculty members above those of ordinary schoolteachers, and by doing so, he attracted the best scholars to the university. Harper had expert knowledge of every department of education as well as business acumen, and he was a very powerful public speaker .[2]

In addition to encouraging the establishment for the first department of Egyptology and Sociology in the United States, Harper ensured the establishment of the University of Chicago Press. Harper also instituted the first extension service in America designed to bring classes to those who could not attend regular classes—because of their work or other obligations. One of Harper's ideas, that students should be able to study the first two years of college in their own communities to be better prepared for the rigors of college, helped lead to the creation of the system of community colleges in the United States.

While at University of Chicago, Harper also chaired a mayoral commission responsible for reorganizing Chicago Public Schools and standardizing the system's curriculum. Harper, being opposed to the employment of women as teachers (which had resulted from the reforms of Horace Mann), moved to block a raise for female teachers and encourage the selective hiring of men. The ensuing dispute contributed to the organizing of the Chicago Teachers Federation, the precursor to the Chicago Teachers Union.[5]

William Rainey Harper married Ella Paul Harper in 1875. They were the parents of three sons, Samuel Northrup, Paul, and Donald, and one daughter, Davida.

Additionally, in 1896, Harper assisted Lydia Moss Bradley in developing her plans for the creation of Bradley Polytechnic Institute in Peoria, Illinois. Upon the founding of the institute, now known as Bradley University, Harper served as its first president.[6] William Rainey Harper College, a community college located in Palatine, Illinois, is named for him. In 1903 Harper founded the Religious Education Association.[7] He is also the namesake of Harper High School and Harper Avenue in Chicago. A former elementary school in Cleveland is named for him as well.[8]

Harper died on January 10, 1906, of cancer at age 49. He and his wife are interred at the Rockefeller Memorial Chapel on the University of Chicago campus.[9]

Note 1: The original log cabin that was William Rainey Harper’s birthplace has been preserved and is located in New Concord, Ohio, across from the main gate of Muskingum College.