Colonel William Rhett (4 September 1666–12 January 1722) was a British-born plantation owner in the Province of Carolina in the late 17th and early 18th centuries. Arriving in America in 1698, accompanied by his wife Sarah, Rhett quickly became a prominent rice farmer and member of the South Carolina Assembly.[1]

Rhett was colonel of the Provincial militia, receiver-general of the Lords Proprietors of Carolina, surveyor, and comptroller of customs for Carolina and the Bahama Islands.[2]

In 1706, Rhett commanded a flotilla which fought off a Franco-Spanish attack on Charles Town.[1] In 1716 he provided two vessels to be fitted out as pirate hunters - the Henry and the Sea Nymph, each with eight guns and a crew of between 60 and 70 men. Rhett assumed the position of captain of this small flotilla and led it to victory in the 1718 Battle of Cape Fear River, capturing the infamous Stede Bonnet, the so-called "gentleman pirate."[1]

Rhett's house in Charleston, completed in 1716, still stands in its original location at 54 Hasell St., Charleston, South Carolina. It has been restored and is now privately owned.

A descendant was Robert Rhett. 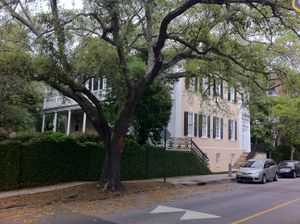