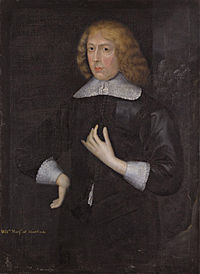 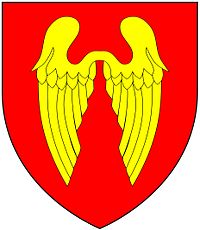 Arms of Seymour: Gules, two wings conjoined in lure or

William Seymour, 2nd Duke of Somerset, KG (1588 – 24 October 1660) was an English nobleman and Royalist commander in the English Civil War.

Imprisonment in the Tower 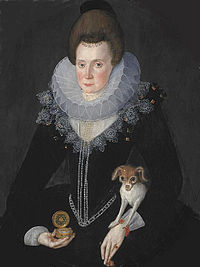 Seymour made a secret marriage at Greenwich on 22 June 1610 to Arbella Stuart (d.1615), daughter of Charles Stuart, 1st Earl of Lennox and Elizabeth Cavendish. Arbella was thirteen years his senior, and King James I disapproved of the marriage as the union of two potential Tudor pretenders to the throne, who were respectively fourth and sixth in line, could only be seen as a threat to the ruling dynasty. As a result, William was condemned to life imprisonment in the Tower of London and thus became the fourth of five generations of Seymours to spend time in that prison.

In June 1611 Seymour escaped from the Tower, planning to meet up with Arbella, who also had escaped captivity. They were to flee to the Continent, but bad weather and other circumstances prevented their meeting, and Arbella was recaptured and placed back in the Tower. William however managed to reach safety abroad at Ostend, but was never reunited with Arbella who remained in the Tower until her death in 1615.

In December 1620 Seymour was elected Member of Parliament for Marlborough in Wiltshire, but vacated the seat soon afterwards on his elevation to the House of Lords, having succeeded his grandfather as Earl of Hertford in 1621. In the House of Lords he became a prominent opponent to King Charles I, where he supported the Petition of Right of 1628, and co-signed the letter of the twelve Peers of 1640, along with his brother-in-law Robert Devereux, 3rd Earl of Essex.

During the Long Parliament Hertford eventually parted company with the more radical opponents of the King, and in 1641 was created by him Marquess of Hertford. In the Civil War he was a moderate royalist, along with such figures as Sir Edward Hyde, and throughout sought a compromise settlement, by continuing unofficial negotiations throughout the war with his brother-in-law Essex, the Parliamentary commander. He was nevertheless a trusted supporter of the king, who made him guardian of his son the future King Charles II, and he undertook several important military commands in royalist service over the course of the war, including commanding troops from South Wales.

After the end of the First Civil War and the king's imprisonment, Hertford was the most prominent nobleman to remain alongside the king throughout his captivity, and was with him until his execution in 1649. During the Inter-regnum, Hertford kept himself away from both politics and royalist conspiracies, in the belief that the monarchy would eventually be restored and that conspiracies would only delay that event.

When the Restoration of the Monarchy came in 1660, Hertford was restored to all his former positions, and his services in the Royalist cause were further recognised by King Charles II, who in 1660 restored Hertford to his great-grandfather's Dukedom of Somerset, which had been forfeited in 1552. He thus became the 2nd Duke of Somerset.

Hertford died at Essex House in London and was buried on 1 November 1660 at Great Bedwyn in Wiltshire. He was succeeded by his grandson William Seymour, 3rd Duke of Somerset.