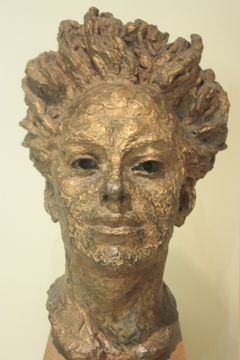 William Soutar was born on 28 April 1898 on South Inch Terrace[3] in Perth, Scotland, the only child of John Soutar (1871–1958), master joiner, and his wife, Margaret Smith (1870–1954), who wrote poetry. His parents belonged to the United Free Church of Scotland. He was educated at Southern District School, Perth, and at Perth Academy, before joining the wartime Royal Navy in 1916. By the time he was demobilized in November 1918, he was already suffering from what was to be diagnosed in 1924 as ankylosing spondylitis,[4] a form of chronic inflammatory arthritis.[5]

Soutar began to study medicine at the University of Edinburgh in 1919, but switched to English. He did not excel academically, but he began to contribute to the student magazine. His first volume, Gleanings by an Undergraduate (1923), was published at his father's expense, as were several others. He began to keep a diary on 18 April 1919. During that period he made contact with Hugh MacDiarmid, then in Montrose, and with Ezra Pound. MacDiarmid at this time was abandoning poetry in English in favour of a "synthetic Scots", a literary language compiled from dialects and from earlier writers such as Robert Henryson and William Dunbar.

Soutar's work correspondingly altered radically, and he became a leading figure of the Scottish Literary Renaissance, whom posthumous editors would dub "one of the greatest poets Scotland has produced."[6] His family adopted an orphaned cousin of his, seven-year-old Evelyn, in 1927, and this became a spur for him to write also for children. Seeds in the Wind (1933) was a volume of "bairn-rhymes" in Scots.[7]

By 1930 Soutar was bedridden with his disease. He died in 1943 of tuberculosis, which he had contracted in 1929. He is buried in Perth's Jeanfield and Wellshill Cemetery.[8] His collected poems, edited by MacDiarmid, were published in 1948. His journal, The Diary of a Dying Man, was published posthumously. One form of verse which he used were cinquains (now known as American cinquains),[9] which he preferred to call epigrams.[10] Interest in Soutar's work in Scots and English, and for adults and children, has revived considerably since the 1980s, although none of his verse was in print for his centenary in 1998.[11] In 2014 he was the subject of a BBC radio programme: The Still Life Poet by Liz Lochhead.

Benjamin Britten set twelve of Soutar's poems for tenor voice and piano in the 1969 song cycle Who Are These Children? (op. 84).