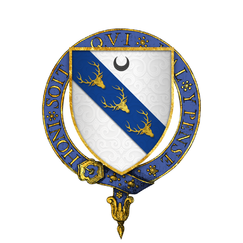 Sir William Stanley KG (c. 1435[1] – 10 February 1495) was an English soldier and the younger brother of Thomas Stanley, 1st Earl of Derby. Stanley fought with his troops in several battles of the Wars of the Roses.

He was born at Lytham, Lancashire, the younger son of Thomas Stanley, 1st Baron Stanley. In 1465 he married Joan, daughter of John Beaumont, 1st Viscount Beaumont, and widow of John, Lord Lovel. He married secondly, c.1471, Elizabeth Hopton, daughter of Thomas Hopton with whom he had a daughter, Jane Stanley. They lived at Holt, Wrexham.[2]

A noble who originally supported the Yorkist faction, he was a celebrated military commander. He was loyal to Edward IV (Richard III's brother) but when Edward died things started getting out of hand. He fought on the Yorkist side at the Battle of Blore Heath in 1459. In 1465 he was granted the Skipton lands and castle of the dispossessed Lancastrian Cliffords. After the Battle of Tewkesbury in 1471, it was he who captured Queen Margaret of Anjou, who led the Lancastrian faction, and he was made a Knight Banneret by the king. In 1483 he was made Chief Justice of North Wales. After Richard III came to the throne he was awarded more land in North Wales for his loyal services.[3]

However, in 1485 he decided to change sides and supported the Lancastrian Henry Tudor's bid for the throne. Stanley is best known for his action at the Battle of Bosworth, where he decisively attacked the Yorkists under Richard III, helping to secure Henry VII's victory. In gratitude for his timely intervention, the new king bestowed many favours on him, including the new post of Lord Chamberlain.

However, in 1495 Stanley was convicted of treason and executed for his support of the pretender Perkin Warbeck. He readily admitted to the crime despite circumstantial evidence as he thought that through a full confession he would escape execution.[4] Indeed the King might have granted this, partly through mercy and partly to avoid upsetting Thomas, Earl of Derby. Since the King feared that by doing this he would be putting himself in danger by encouraging others to undertake a similar act of folly William was condemned to death and a few days later beheaded.

The Shadow of the Tower

Episode 6 of the 1972 BBC drama series The Shadow of the Tower portrays the circumstances of Stanley's downfall. Interestingly, if – as stated above – he was in possession of the former Clifford estates, it shows Sir Robert Clifford, who had been acting as Henry VII's spy in the camp of Perkin Warbeck, as the one to accuse Stanley of treason. Stanley is portrayed as a vain but careful man who, while keeping his options open, had never committed to active support of the pretender. Detained in the Tower while the other conspirators are on trial, he holds his tongue – apparently convinced that the affair is a ruse by Henry to extort a large fine. He reminds Henry that it was Stanley who took Richard's crown at Bosworth and placed it on Henry's head. Henry's perception is that this was only after Stanley saw which way the battle was going. Nevertheless Henry intends to pardon him. One of the conspirators, a young squire, placed as Stanley's servant in the Tower, convinces Stanley to meet with a fellow prisoner – the garrulous Earl of Kildare. A frustrated Stanley is soon drawn out to give a treasonous tirade. The squire reports this, and is spared the death sentence handed out to his fellows. Henry, under pressure from his mother Margaret Beaufort, Stanley's sister-in-law, was about to pardon Stanley but, on hearing the news, instead has him committed to trial. Stanley is found guilty, sentenced to the forfeit of his estates and a painful death, which the King soon commutes to beheading. Stanley always expects to be pardoned and is shown losing his mind on the scaffold. It is widely recognized that Stanley is one of the greatest and oldest houses in Britain. The heir to the seat of Derby is held by George Stanley