William the Pious redirects here. It can also refer to William II of Provence.

He received a Jesuit education and showed keen attachment to the Jesuit Counter Reformation tenets. His title 'the Pious' was given to him because he devoted his daily routine to masses (when possible, several times a day), prayer, contemplation, and devotional reading. He took part in public devotions, processions, and pilgrimages.

His residence as crown prince was the ancient fortified Wittelsbach seat Trausnitz Castle in Landshut. Its upgrading from a Gothic fortification into a renaissance complex of truly representational proportions including the construction of an arcaded inner court were achieved in the decade between 1568 and 1578.

Like his Wittelsbach father and grandfather, William was a strong supporter of the counter-reformation. He secured the archbishopric of Cologne for his brother Ernest with his campaign in 1583; his brother Ferdinand commanded the Bavarian army in the first 18 months of the Cologne War in an effort to secure the Electorate. Eventually, the Spanish army, under the command of Alexander Farnese, Duke of Parma expelled the Calvinist contender for the Electorate, Gebhard Truchsess von Waldburg, and Ernst secured sole possession of both the Electorate and the Archdiocese of Cologne. This dignity remained in the possession of the family for nearly 200 years.

Two of his sons also followed ecclesiastical careers: Philipp Wilhelm became the Bishop of Regensburg and eventually a Cardinal, and Ferdinand succeeded his uncle, to become Archbishop of Cologne.

During his reign non-Catholics were forced to leave Bavaria, and the so-called Geistlicher Rat, an ecclesiastical council, was formed to advise William on theological affairs, independent of the traditional privy council or the treasury, which administered secular affairs. The Geistlicher Rat supervised and disciplined the duchy’s Catholic clergy through regular visitations; it controlled the Catholicism of all the state officials by issuing certificates documenting their annual confession and communion; it funded new Catholic schools, new Catholic colleges, new houses of religious orders, especially the missionary and educational ones, such as the Jesuits and Capuchins for men and the Ursulines for women. William is responsible for numerous executions due to Witch-hunt in his duchy.

The Jesuit St. Michael's Church and college of the Jesuits were built in Munich between 1583 and 1597 as spiritual centers for the counter-reformation. William's spending on Church-related projects, including funding missionaries outside Bavaria—as far away as Asia and the Americas—put tremendous strain on the Bavarian treasury. The Italian confidence man Marco Bragadino who was promising to make copious amounts of gold to erase the Dukes's debts was called upon by William V in 1590, and executed after he had failed. William abdicated on 15 October 1597 in favour of his son, Maximilian I and retired into a monastery where he spent the remainder of his life in contemplation and prayer. He died in 1626 in Schleissheim Palace. He is buried in St. Michael's Church, Munich. 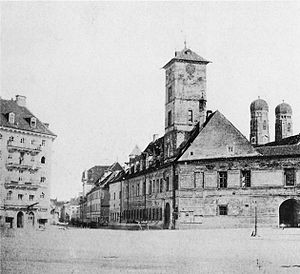 Already as crown prince in Landshut William patronised the arts. His court architect Friedrich Sustris was in charge of the decoration and remodelling of Trausnitz Castle in Landshut and later when William ascended to rule for the expansion of the Munich Residenz and the construction of St. Michael's Church, of the adjoining college and of the palace Wilhelminische Veste (the so-called Maxburg) in Munich. The sculptors Hans Krumpper and Hubert Gerhard along with painters Peter Candid and Hans von Aachen were engaged to the court. The history of Schleissheim Palace started with a renaissance country house and hermitage founded by William. In 1589 William initialized the Hofbräu Brewery. 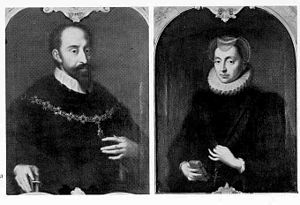 William V, Duke of Bavaria and his wife, Renata of Lorraine

Married Renata of Lorraine (1544–1602) in Munich on 22 February 1568. They had 10 children, three of whom died in infancy or childhood. The remainder went on to careers or marriage: