Sir William George Granville Venables Vernon Harcourt, KC, MP (14 October 1827 – 1 October 1904) was a British lawyer, journalist and Liberal statesman. He served as Member of Parliament for various constituencies and held the offices of Home Secretary and Chancellor of the Exchequer under William Ewart Gladstone before becoming Leader of the Opposition. A talented speaker in parliament, he was sometimes regarded as aloof and possessing only an intellectual involvement in his causes. He failed to engender much emotional response in the public and became only a reluctant and disillusioned leader of his party.[1]

Harcourt was the second son of the Rev. Canon William Vernon Harcourt, of Nuneham Park, Oxford and his wife Matilda Mary Gooch, daughter of Colonel William Gooch.[2] His father was himself the fourth son and eventually heir of Edward Harcourt, Archbishop of York[2] and his wife Lady Anne Leveson-Gower.[3] Anne was a daughter of Granville Leveson-Gower, 1st Marquess of Stafford and his second wife Lady Louisa Egerton. Her maternal grandparents were Scroop Egerton, 1st Duke of Bridgewater and his second wife Rachel Russell.[4] Rachel was a daughter of Wriothesley Russell, 2nd Duke of Bedford and the rich heiress Elizabeth Howland, daughter of John Howland of Streatham.[4] William was therefore born a Vernon, and by his connection with the old families of Vernon and Harcourt was related to many of the great English houses, a fact of which he was proud. In later life his descent from the Plantagenets was a joke among his political opponents.[1]

William's childhood was an austere one, educated at home by a Swiss governess, he was sent to a private school at Southwell, Nottinghamshire when he was eight. William's father denied him a public school education, sending him to be educated in classics at the small class of Rev. John Owen Parr. In 1840, Parr moved to Preston and William witnessed the Preston bread riots there in 1842. He left Parr in 1844 and, after two more years' study at home, William entered Trinity College, Cambridge to pursue his interest in mathematics.[5] At Cambridge he became an Apostle, graduating with first-class honours in the classics tripos in 1851, but he did not enjoy the mathematics, graduating only senior optime.[2]

At Cambridge, William rejected his family's Tory instincts and began to write for the Morning Chronicle in support of Sir Robert Peel. William's father encouraged him to seek a Cambridge fellowship or a career in politics but William chose law and journalism. He entered Lincoln's Inn in 1852 and was called to the bar at the Inner Temple in 1854.[2]

He quickly made his mark as a speaker,[1] his reception into London society being eased by his uncle George Harcourt and aunt Frances Waldegrave. From 1855 William started to write for the Saturday Review, becoming increasingly a follower of William Ewart Gladstone and an opponent of Lord Palmerston. He practised in railway law, commentating, especially in The Times on international law. In 1862, he wrote some famous letters to The Times over the signature of "Historicus," supporting Britain's neutrality in the American Civil War and condemning the widespread public sympathy for the Confederate States. He also wrote on the Trent Affair and the Alabama controversy.[2][6] He became a Queen's Counsel in 1866, and was appointed Whewell professor of international law at the University of Cambridge in 1869.[1]

Harcourt entered parliament as Liberal member for Oxford, and sat from 1868 to 1880, being appointed Solicitor General and knighted in 1873. He was re-elected in the Liberal victory at the United Kingdom general election, 1880 and, though he had not been a strong supporter of Gladstone in opposition, he was appointed Home Secretary.[1] A mandatory re-election was then required on acceptance of such an office and Harcourt was defeated by Alexander William Hall by just 54 votes. Though Hall was subsequently unseated for political corruption, a seat was found for Harcourt at Derby, by the voluntary retirement of Samuel Plimsoll.[2] He continued to represent that constituency until 1895, when, having been defeated at the general election, he found a seat in West Monmouthshire.[1]

His name became connected with the passing of the Ground Game Act 1880 and the Arms (Ireland) Act 1881. As Home Secretary at the time of the Phoenix Park murders and the subsequent London bombings he reacted rapidly, and the Explosive Substances Act 1883 was passed through all its stages in the shortest time on record. His robust stand on law and order brought him into conflict with the Irish members. In 1884 he introduced an aborted bill for unifying the municipal administration of London.[1] and was responsible for demanding the prosecution in the survival cannibalism case of R v. Dudley and Stephens.[7] In 1885 he was responsible for commuting John 'Babbacombe' Lee's death penalty to life imprisonment after his execution failed three times.[8] He was further the victim of the embarrassing stunts of the Harcourt interpolation and the Home Office Baby.[9]

He was recognised as one of the ablest and most effective leaders of the Liberal party and when, after a brief interval in 1885, Gladstone returned to office in 1886, Harcourt was made Chancellor of the Exchequer, an office which he again filled from 1892 to 1895. Between 1880 and 1892 Harcourt acted as Gladstone's political deputy. A first-rate party fighter, his services were of huge value. However, in spite of his great success as a platform speaker, he was generally felt to be speaking from an "advocate's brief", and did not impress the public as a conviction politician. It was he who coined the phrase about "stewing in Parnellite juice", and, when the split came in the Liberal party on the Irish question, even those who gave Gladstone and John Morley the credit of being convinced Home Rulers could not be persuaded that Harcourt had followed anything but the line of party expediency.[1] 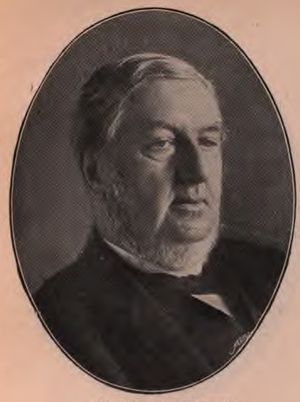 In 1894 he introduced and carried a memorable budget, which equalised the death duties on real and personal property. After Gladstone's retirement in 1894 and Lord Rosebery's selection as prime minister, Harcourt became the leader of the Liberal party in the House of Commons, but it was never probable that he would work comfortably in the new conditions. He had been ignored as Gladstone's successor, and it was evident that Rosebery's ideas of Liberalism and of the policy of the Liberal Party were not those of Harcourt. Their differences were patched up from time to time, but the combination was unstable. However the one significant legacy of the government was the introduction of a high uniform rate of death duties in Harcourt's 1894 budget. As Harcourt himself was a second son, and thus unlikely to ever have to pay such duties himself, though this proved to not be the case, it was often quipped that this introduction was a "second son's revenge".[1]

Leader of the Opposition

At the 1895 elections it was clear that there were divisions as to what issue the Liberals were fighting for.[1] The effect of Harcourt's aborted Local Veto Bill, which would have given parishes the right to vote on the closure of all local public houses,[10] on the election was seen not only in his defeat at Derby, which gave the signal for the Liberal rout, but in the set-back it gave to temperance legislation. Though returned for West Monmouthshire (1895, 1900), Harcourt's speeches in debate only occasionally showed his characteristic spirit, and it was evident that for the hard work of opposition he no longer had the same motivation as of old.[1] In October 1896 Gladstone, in his last public speech, called for action to support the Armenians who were being massacred by their Ottoman rulers. Harcourt backed Gladstone but Rosebery used the incident as an excuse to resign as Leader of the Opposition and Harcourt became an unenthusiastic leader.[2]

During Harcourt’s period as leader of the Liberal party in the House of Commons, the all-House enquiry into the failed Jameson Raid took place. Harcourt’s performance in the enquiry disillusioned sections of the Liberal party, as the Opposition let the Conservative government off the hook by not exposing the involvement of the Colonial Secretary Joseph Chamberlain in the raid’s genesis and preparation, Harcourt instead settling for censure of the Prime Minister of the Cape Colony, Cecil Rhodes.[11] [12]

In December 1898 the crisis arrived and, with Morley, Harcourt retired from the party and resigned his Leadership of the Opposition, alleging as his reason, in letters to Morley, the cross-currents of opinion among his old supporters and former colleagues. The split excited considerable comment, and resulted in much heart-searching and a more or less open division between the section of the Liberal party following Rosebery and those who disliked his imperialism.[1]

Though now a private member, Harcourt still continued to assert his independent position, and his attacks on the government were no longer restrained by any deference to Liberal Imperialism. He actively intervened in 1899 and 1900, strongly condemning the government's financial policy and their attitude towards the Transvaal. Throughout the Second Boer War he lost no opportunity of criticising the South African developments in a pessimistic vein. A great parliamentary debater, he sprinkled his speeches with humour. From 1898 to 1900 he was conspicuous, both on the platform and in letters to The Times, in demanding active measures against ritualism in the Church of England. However, his attitude in this was reflected in his political advocacy of disestablishment. In March 1904, just after he had announced his intention not to seek election again to parliament, he succeeded, by the death of his nephew, to the family estates at Nuneham. He found that the estate was in crisis, especially after having to pay the death duties he himself had introduced, and he died suddenly there in the same year.[1]

Harcourt was offered a peerage in 1902, but declined to stay in the House of Commons, and to allow his son to advance his political career.[13]

On 5 November 1859, Harcourt married his first wife Maria Theresa Lister, known as Therese.[14] She was a daughter of novelist Thomas Henry Lister and Lady Maria Theresa Villiers. They had two children:

His first wife died on 1 February 1863, only a day after giving birth to their second and last son. Harcourt remained a widower for thirteen years. On 2 December 1876, he married his second wife Elizabeth Cabot Motley. Elizabeth was a daughter of American historian John Lothrop Motley and his wife Mary Benjamin. Her maternal uncle Park Benjamin was a patent lawyer and writer on scientific subjects. She had been previously married to naval officer Thomas Poynton Ives. Ives was among the casualties of the American Civil War. By this second marriage, Harcourt had his third and final son: