Crouch was born on July 12, 1941 in Los Angeles, California.[2] He attended the San Diego Army and Navy Academy and graduated from Claremont Men's College with a degree in Civil Government.[3] He holds a Master's Degree in History from Texas Christian University.

Crouch commanded soldiers at every level from platoon through army. He began his service in 1963 as a cavalry platoon leader in the 5th Infantry Division. He went on to command four companies, two of which were cavalry troops in combat. His subsequent commands included a cavalry squadron, the 2nd Armored Cavalry Regiment and the 5th Infantry Division,[4] where he had started as a platoon leader. He also served as Commanding General of the Eighth United States Army and Chief of Staff United Nations Command/Combined Forces Command and United States Forces Korea.

He assumed command of U.S. Army Europe on December 19, 1994, and assumed command of Allied Land Forces Central Europe (LANDCENT) on February 15, 1996, and was its first American since its establishment in 1993. He served as Vice Chief of staff from 1997 until his retirement in 1998.

He is a graduate of the U.S. Army Command and General Staff College and the U.S. Army War College. His decorations include the Defense Distinguished Service Medal, the Silver Star, the Legion of Merit and the Bronze Star.

Crouch's wife, Vicki, also a native of Southern California, attended Scripps College, as did their two daughters Cami and Cathi. The Crouches have two grandchildren, Christopher William Cronin and Elizabeth Allison Cronin, and reside in Colorado. 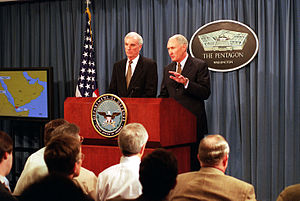 Crouch, along with retired Admiral Harold W. Gehman, Jr. were appointed by Defense Secretary William S. Cohen on October 19, 2000 as co-chairmen of the Department of Defense's Cole Commission to investigate the bombing of the USS Cole.[5] He has also served on the board of directors of the Community Anti-Drug Coalitions of America,[6] and since May 2005 has served on the board of Directors of FLIR Systems.[3] He is also a Senior Mentor with the Leadership Development and Education Program for Sustained Peace at the U.S. Naval Postgraduate School, serves on the board of the Keck Institute for International and Strategic Studies at Claremont McKenna College,[3] and sits on the advisory board of Isilon Systems.[4]