William Walcot (10 March 1874 – 21 May 1943) was a British architect graphic artist and etcher, notable as a practitioner of refined Art Nouveau (Style Moderne) in Moscow, Russia (as Вильям Францевич Валькот). His trademark Lady's Head keystone ornament became the easily recognisable symbol of Russian Style Moderne. In 1920s–1930s, he concentrated on graphic art and was praised as the best architectural draftsman in London.

William Walcot was born at Lustdorf, near Odessa in a mixed Scottish-Russian family. He grew up in Western Europe and South Africa, returning to Russia at the age of 17, and studied arts and architecture under Leon Benois at the Imperial Academy of Arts in Saint Petersburg. Later, he attended art schools in Paris. Walcot's career as an architect in Moscow lasted only six years, but he managed to leave a lasting heritage of refined, pure Art Nouveau. Unlike contemporary architects like Fyodor Schechtel, Walcot never ventured into Neo-Gothic or Russian Revival styles – his work is strictly Art Nouveau, in its English Decadent variety (according to contemporary Russian critics).

His largest and best known work was the Metropol Hotel, financed by Savva Mamontov. The spacious building, now operating as a hotel only, was conceived as a cultural center around Private Opera hall. In 1899, Walcot applied to the open contest with a draft codenamed A Lady's Head (Женская головка), earning the fourth prize and losing to Lev Kekushev. However, Mamontov discarded the professional jury decision, and awarded the design to Walcot (Lev Kekushev later joined the team as project manager). More than once, Walcot's original plans were changed in the process; in fact, there is little common between extant building and his 1899 draft (Brumfield, fig.56) – but the Lady's Head persisted in main hall ornaments. The building, completed in 1905 after a devastating fire in 1901, was decorated by Mikhail Vrubel, Alexander Golovin, Nikolai Andreev and other artists. Participation of Victor Vesnin and Fyodor Schechtel, suggested by William Brumfield, has not been confirmed.

Lady's Head became Walcot's trademark, repeated in his later works (usually in place of an arch keystone), and frequently imitated by local craftsmen. For a while, he enjoyed an unprecedented flow of inquiries and could secure two high-profile commissions of his own choice. These buildings, soon occupied by foreign embassies, are well maintained and retain most of their original interiors:

Walcot's 1902 draft for the Lutheran Cathedral in Moscow won the contest, but the cathedral was eventually built to another architect's design. Walcot published various drafts in architectural magazines, influencing many local architects (Brumfield, fig.58).

In 1904, Walcot lost the contest for the Polytechnical Society Building in Myasnitskaya Street to Adolph Mincus; the building, completed in 1905–1907 by Alexander Kuznetsov (1874–1954), bears some details from Walcot's rejected draft. 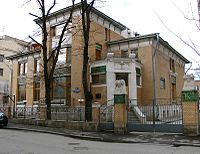 In 1906, Walcot relocated to London. There he was initially employed as a draughtsman for the South African architect Eustace Frere. He rarely returned to practical construction, designing only one London building: 61 St James's Street (1933). Rather, Walcot worked as an architectural draftsman, famous for his artistic presentation of other architects' designs and exhibiting his own work at the Royal Academy summer exhibitions.

He was the most prominent architectural draughtsman of the 1920s and 30s, developing a somewhat impressionistic style in gouache and watercolour which won commissions from Edwin Lutyens, Herbert Baker and Aston Webb. He also engaged in printmaking, creating reconstructions of ancient Greek, Roman, Babylonian and Egyptian buildings. A folio of his work was published in 1919 as Architectural Watercolours and Etchings of William Walcot. He was elected to the Royal Society of British Artists in 1913, as an associate of the Royal Society of Painter-Etchers and Engravers in 1916 and a Fellow of the RIBA in 1922. He was also an associate of the British School at Rome.

Walcot's successful practice was ruined with the outbreak of World War II, and, in 1943, Walcot committed suicide at Hurstpierpoint, Sussex. Walcot's painting and etchings are frequently exhibited; his painting palette is preserved at the Royal Institute of British Architects. He had a retrospective exhibition at the Fine Arts Society in 1974.