Warham was the son of Robert Warham of Malshanger in Hampshire, and was educated at Winchester and New College, Oxford.

After graduating, Warham practising and teaching law both in London and Oxford.[1] His father was a tenant farmer,[2] but his brother, Sir Hugh Warham, acquired an estate at Croydon, which passed to his daughter Agnes, who married Sir Anthony St Leger.[3]

Later Warham took holy orders, held two livings (Barley and Cottenham), and became Master of the Rolls in 1494, while Henry VII found him a useful and clever diplomatist. He helped to arrange the marriage between Henry's son, Arthur, Prince of Wales, and Catherine of Aragon; he went to Scotland with Richard Foxe, then bishop of Durham, in 1497; and he was partly responsible for several commercial and other treaties with Maximilian I, Holy Roman Emperor who was also Count of Flanders and Regent Duke of Burgundy on behalf of his son Philip IV of Burgundy.

In 1502 Warham was consecrated Bishop of London and became Keeper of the Great Seal, but his tenure of both these offices was short, as in 1504 he became Lord Chancellor and Archbishop of Canterbury. In 1506 he became Chancellor of Oxford University, a role he held until his death. In 1509, the Archbishop married and then crowned Henry VIII and Catherine of Aragon. 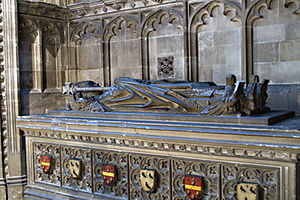 As archbishop, Warham seems to have been somewhat arbitrary – for example, his actions led to a serious quarrel with Foxe (by then Bishop of Winchester) and others in 1512. This led to his gradually withdrawing into the background after the coronation, resigning the office of Lord Chancellor in 1515, and was succeeded by Wolsey, whom he had consecrated as bishop of Lincoln in the previous year. This resignation was possibly due to his dislike of Henry's foreign policy.

Warham was present at the Field of the Cloth of Gold in 1520, and assisted Wolsey as assessor during the secret inquiry into the validity of Henry's marriage with Catherine in 1527. Throughout the divorce proceedings Warham's position was essentially that of an old and weary man. He was named as one of the counsellors to assist the queen, but, fearing to incur the king's displeasure and using his favourite phrase ira principis mors est ("the king's anger is death"), he gave her very little help; and he signed the letter to Clement VII, which urged the pope to assent to Henry's wish. Afterwards it was proposed that the archbishop himself should try the case, but this suggestion came to nothing.

Warham presided over the Convocation of 1531 when the clergy of the province of Canterbury voted £100,000 to the king to avoid the penalties of praemunire and accepted Henry as supreme head of the church with the face-saving clause "so far as the Law of Christ allows."

In Warham's concluding years, however, the archbishop showed rather more independence. In February 1532, he protested against all acts concerning the church passed by the parliament that met in 1529, but this did not prevent the important proceedings which secured the complete submission of the church to the state later in the same year. Against this further compliance with Henry's wishes, Warham drew up a protest; he likened the action of Henry VIII to that of Henry II and urged Magna Carta in defence of the liberties of the church. He attempted in vain to strike a compromise during the Submission of the Clergy. Warham was munificent in his public and moderate in his private life.

He died on a visit to his nephew, also William Warham, and was buried in the Martyrdom or north transept of Canterbury Cathedral.