Born in Philadelphia, White began his education at Philadelphia College (which was later known as the University of Pennsylvania), taking his B.A. in 1765 and his A.M. about three years later. In 1770, he sailed for England on the ship Britannia, for his ordination as a deacon, which took place in the Chapel Royal at St James's Palace. He subsequently returned to England on two occasions: once in 1772, to be ordained priest, and again in 1787, when he was consecrated bishop by the Archbishop of Canterbury, the Archbishop of York, the Bishop of Bath and Wells, and the Bishop of Peterborough. In 1781, after further theological studies, he received a Doctor of Divinity degree from the University of Pennsylvania.

William White was the second bishop consecrated for the Episcopal Church of the United States.

Though an Anglican (Episcopalian) cleric who was sworn to the king in his ordination ceremony, White, like all but one of his fellow Anglican clerics in Philadelphia, sided with the American revolutionary cause.[2] After the war, White wrote The Case of The Episcopal Churches in the United States Considered, a pamphlet that laid out the foundational thinking for the emerging Episcopal Church. Among the innovations he proposed (and which were eventually adopted) was including lay people in the church's decision making bodies. Thus, at the founding General Convention of the Episcopal Church in 1785, the House of Deputies was composed of both lay and clergy members.[3]

After his consecration in England, Bishop White helped create an American episcopate, participating in the consecration of Thomas John Clagett as Bishop of Maryland at the General Convention in 1792, as well as serving as the Episcopal Church's first and fourth Presiding Bishop (the latter time as the most senior of bishops, as became the custom for the next century). Bishop White participated in the consecration of most American Episcopal bishops during the country's first two decades. He also consecrated two African-Americans as deacons and then priests, Absalom Jones of Philadelphia (in 1795 and 1804, respectively), and William Levington of New York (who became missionary to free and enslaved African Americans in the South and established St.James Episcopal Church in Baltimore circa 1824). Although Bishop White did not travel extensively through his diocese, he did support missionary priests, including Simon Wilmer (who traveled through Pennsylvania and New Jersey and ultimately settled down in what became the Maryland suburbs of Washington D.C.) and William Meade (who traveled extensively throughout Virginia and ultimately became its bishop, bishop White participating in his consecration). While the diocese of Virginia had no bishop to minister to settlers moving west, the elderly Bishop White traveled to Wheeling in what much later became West Virginia to establish St. Matthew's Church.

White also took an active role in creating several charitable and educational institutions. In 1785 he founded the Episcopal Academy, to educate the sons of Philadelphia's Episcopalian residents to become to leaders in society. In 1795 Bishop White raised funds to create a school (built on Race Street between 4th and 5th) for black and Native American children. He also helped to create a Magdalen Society in Philadelphia in 1800 for "unhappy females who have been seduced from the paths of virtue and are desirous of returning to a life of rectitude." This was the first institution of this kind in the United States.[4] (See also: Magdalene asylum)

White was not known for oratorical skills. Instead, he earned the esteem of Philadelphians through his erudition and ongoing charitable works, especially during the multiple outbreaks of yellow fever in that city throughout the 1790s. The bishop and his friend and neighbor Benjamin Rush were among the few prominent citizens who remained to tend the ill when many other wealthy inhabitants fled to the countryside. He was a member of the American Philosophical Society,[5] along with many other prominent Philadelphians, including Benjamin Franklin, as well as a trustee of the University of Pennsylvania from 1774 until his death. During his tenure as trustee, he also served as Treasurer (1775–1778) and President (1790–1791) of the Board of Trustees. 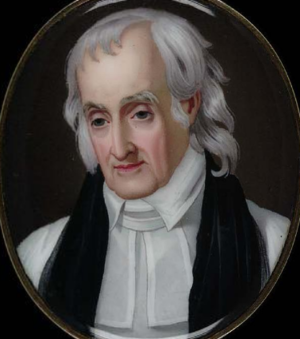 Bishop White was married to Mary Harrison (1750–1797), who came from one of the First Families of Virginia. Mary's father, Capt. Henry Harrison, had also been the Mayor of Philadelphia from 1762-1763. The Whites had eight children, only three of whom survived to adulthood. As a widower, Bishop White supported seven of his grandchildren. In 1813, the bishop's widowed daughter Elizabeth brought her two daughters to live in the house. Elizabeth, called "Betsy" by the family, managed the household for nearly twenty years until her death in 1831. After the death of the Whites' son-in-law and daughter Mary, the Bishop and Betsy brought his five grandchildren (through Mary) into his home where they lived for the ten years leading up to his death.

White's younger sister Mary was married to Robert Morris, who was known as the "Financier of the Revolution" for securing funding for the colonial cause.

A lengthy obituary devoted to Bishop White in the National Gazette and Literary Register described him thus:

"...[T]he duties of the several important relations in which he stood to society were performed with undeviating correctness and suavity; he possessed the rare merit of winning the respect and love of an entire community to which he was an ornament and a blessing. His piety was deep and unfeigned; his walking humble yet dignified; his acquirements profound; in his mind the welfare of the Christian church was always the prominent consideration...He was one of those examples of steady virtue sent upon earth by Divine providence, as if to prove how near the great pattern of perfection it is permitted to approach."[7]

Bishop White died at his home after a lingering illness, retaining his full mental faculties until the end. He was buried in the family vault at Christ Church Burial Ground on July 20, 1836, next to his brother-in-law, Robert Morris. On December 23, 1870 his remains were re-interred in the chancel of Christ Church. 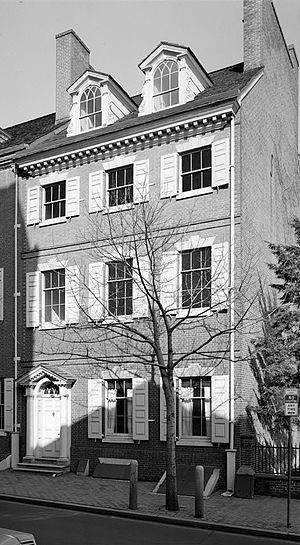 His home at 309 Walnut Street in Philadelphia is today part of Independence National Historical Park. It is notable, in part, as one of the first houses to have an indoor "necessary," at a time when most privies were built outside of houses. The prominent physician Benjamin Rush lived next door.

A second Bishop White House is located on Old Mill Lane, in the Historic District in Rose Valley, Pennsylvania. Bishop White sent his family to this house in 1793, during the Philadelphia yellow fever epidemic. Though his family lived there and he visited the house, White generally remained in Philadelphia.[8]

White is honored with a feast day on the liturgical calendar of the Episcopal Church (USA) on July 17.

In Bishop White's response of August 15, 1835 to Colonel Mercer of Fredericksburg, Virginia, he writes:

"In regard to the subject of your inquiry, truth requires me to say that General Washington never received the communion in the churches of which I am the parochial minister. Mrs. Washington was an habitual communicant...I have been written to by many on that point, and have been obliged to answer them as I now do you."

This letter is one piece of evidence among many which are frequently cited in support of Washington's deist or even atheist beliefs. Although Washington never received communion there, he attended services at Christ Church regularly for about 25 years. (See also: George Washington and religion)