William Williams Pantycelyn[1] (c. 11 February 1717[2] – 11 January 1791), also known as William Williams, William Pantycelyn, and Pantycelyn, is generally acknowledged as Wales' most famous hymn writer. As a writer of both poetry and prose, he is today considered one of the greatest literary figures of Wales. He was, however, equally distinguished in the world of religion, as one of the key leaders of the 18th century Welsh Methodist revival, along with Howell Harris and Daniel Rowland. 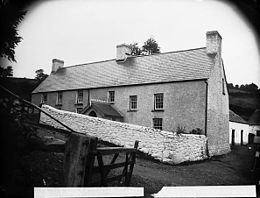 Williams was born near Beulah, now in Powys, in 1716, the son of John and Dorothy Williams. John, who died in 1742, had a small farm at Pantycelyn ("Holly Hollow"), in the Cwm cyn Nos ('Valley before Night') in mid-Wales, between Abergwesyn and Beulah. The family were Nonconformists. William Williams was educated locally.

He had intended to become a doctor, but this changed in 1737, when he had a calling to a religious vocation while listening to the evangelical reformer Howell Harris preaching in Talgarth.

For much of his life, Williams lived in the parish of Llanfair-ar-y-bryn, near the town of Llandovery (Llanymddyfri). He died there in 1791, at the age of 74, and is buried in the churchyard. He is also commemorated by a memorial chapel in Llandovery. 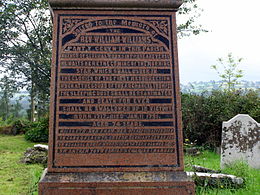 William Williams felt called to the priesthood; and in 1740, despite his family's links with the Nonconformist branch of Christianity, he took deacon's orders in the Established church, the Anglican Church. The Anglican church in Wales is known formally as the Church in Wales.

He first appointment was as curate to Theophilus Evans (1693–1767) in the parishes of Llanwrtyd, Llanfihangel Abergwesyn and Llanddewi Abergwesyn. Around this time he became involved in the Methodist movement and in June 1742 his disapproving parishioners reported his activities to the Archdeacon's Court, in Brecon. Methodism was originally a reformist faction within the Church of England and was not intended to be a separatist movement or Church. It was nevertheless seen as a threat to the Anglican establishment and in 1743, when Williams duly applied for ordination as a priest, his application was refused because of his Methodist connexion. His choice was between a comfortable but conformist career in the Anglican Church or the economically precarious but perhaps spiritually rich life of a Methodist preacher outside of the Church. He would devote his life to Methodism.

The key years in the foundation of Methodism were between 1739, when the brothers Charles and John Wesley, both themselves Anglican priests, broke with the Moravian church and set up their own first chapel in Bristol, and 1743, when they drew up their General Rules. This was, unfortunately, the very time that Williams was beginning his own career in the Church and explains the hostility he experienced both from his congregation and from the hierarchy. Williams paid a higher price for his beliefs than did the Wesleys. Williams was shut out of the Establishment at the start of his career, whilst the Wesleys had already been ordained, and although they might have barred themselves from promotion to bishop, both their views and their company remained acceptable to the Establishment, religious and lay, in London.

Charles Wesley declared that his own Methodism was not incompatible with his Anglicanism, and he was buried as an Anglican. John Wesley's doctrine was more favourable to Arminianism than to Calvinism. The brothers wished to reform some practices within Anglicanism, but were not seeking to take their faction toward a full Protestant Reformation. In Wales, however, there was more support for Calvinist teaching. Some time after the death of Williams Pantycelyn, this schism between the doctrine of the English, or Wesleyan Methodists, and that of the Welsh, or Calvinistic Methodists, led to a formal split. Between 1811 and 1823, the Welsh Calvinist Methodists became the Presbyterian Church of Wales. Had he lived a little longer, Williams Pantycelyn would no doubt have approved these moves because, as a Methodist, he himself became a firm advocate of Calvinist Reformation doctrine and frequently invoked stern warnings against Arminianism, Arianism, Socinianism, Sandemanianism and other teachings. [See: G.T. Hughes: p. 7].

Williams Pantycelyn travelled throughout Wales (He is said to have partially supported his ministry by selling tea on his travels [3]) preaching the doctrine of Calvinist Methodism. He needed to be not only a theologian and an advocate for the new Connexion, but also an organiser and administrator. His converts would almost certainly be excluded from their previous place of worship, and the new adherents would need new meeting places and organisation into new congregations, with new community leaders and new preachers. Williams had to organise, and then maintain, these seiadau (fellowship meetings) as he went around the country. Each successful visit to a new locality in turn required a new seiat. Although he was not alone in his mission, the workload and mental burden must have been considerable. By the same token, it must have been deeply rewarding to see the community grow and thrive over the years and to reflect on the alternative life he had forsaken, as the priest of some obscure rural Anglican parish in mid-Wales.

Together with Howell Harris and Daniel Rowland, William Williams "Pantycelyn" is acknowledged as a leader of the Methodist Revival in Wales in the 18th century. 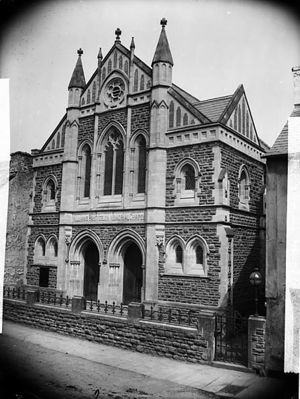 William Williams Pantycelyn was not merely an important figure in the religious life in Wales: he was also one of the most important influences on Welsh language culture, not just in his own lifetime, but on into the 19th and 20th centuries. He is particularly known as a hymnist.

Williams' virtuosity as a hymn-writer earned him the accolade: Y pêr ganiedydd (The Sweet Songster).

William Williams was also known by the bardic name of Pantycelyn. Pant-y-celyn, or 'Holly Hollow', was the name of his farm.

He wrote some of his work in English, but the great majority is in his native Welsh.

He published his first work in 1744: this was the first part of Aleluia, a collection of hymns in Welsh.

This was followed by further collections:

His hymns were not his only major contribution to the success of Calvinistic Methodism. He wrote two long poems on theological and religious themes:

He also wrote a series of elegies in memory of various Methodist and other Christian leaders, including: Griffith Jones of Llanddowror, Howel Davies (the Pembrokeshire preacher), George Whitefield, and Daniel Rowland.

Williams wrote original prose works and also translated others from English. Most were intended to assist the members of the Methodist fellowships he established.

These works were intended to defend and teach the significance of the 1762 revival at Llangeitho. The 1762 revival was a very powerful one which manifested its power physically. As a result, Methodists in Wales were very often known as Jumpers.

He wrote practical guides for a Christian life:

These were for the converts who were members of the seiadau or societies.

An extensive bibliography is to be found in Derec Llwyd Morgan (ed.), Meddwl a Dychymyg Williams Pantycelyn (Llandysul: Gwasg Gomer, 1991)