From Infogalactic: the planetary knowledge core
Jump to: navigation, search
This article is about the joint reign of the English monarchs William III and Mary II. For the university in Williamsburg, Virginia, see The College of William & Mary. For other uses, see William and Mary (disambiguation). 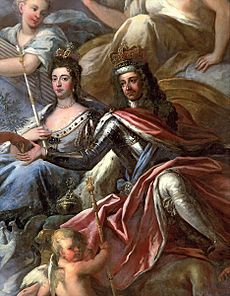 Peace and Liberty Triumphing Over Tyranny (1716), by Sir James Thornhill, on the ceiling of the Painted Hall at the Old Royal Naval College, London. Enthroned in heaven with the Virtues behind them are the royals William and Mary who had taken the throne after the Glorious Revolution and signed the English Bill of Rights of 1689. William tramples on arbitrary power and hands the red cap of liberty to Europe where, unlike Britain, absolute monarchy stayed the normal form of power execution. Below William is the French king Louis XIV.[1]

William and Mary were the co-regnants over the Kingdoms of England, Scotland, and Ireland, namely the Dutch Prince of Orange King William III (& II) and his spouse (and first cousin) Queen Mary II. Their joint reign began in February 1689 after they were offered the throne by the Convention Parliament irregularly summoned by William after his victorious invasion of England in November 1688, the Glorious Revolution. They replaced James II (& VII), Mary's father, who fled the country. Parliament offered William and Mary a co-regency, at the couple's behest. After Mary died in 1694, William ruled alone until his death in 1702. William and Mary were childless and were ultimately succeeded by Mary's younger sister, Anne.

To end the Glorious Revolution, William and Mary signed the English Bill of Rights of 1689. This action both signaled the end of several centuries of tension and conflict between the crown and parliament, and the end of the idea that England would be restored to Roman Catholicism, King William being a Dutch Protestant leader. The Bill of Rights also inspired the English colonists in the Thirteen Colonies to revolt against the rule of King James II and his proposed changes in colonial governance. These revolts occurred in the colonies of Massachusetts, New York, and Maryland.[2]

Stamp duty was first introduced into England during this reign, by an act of 1694 titled "An act for granting to their Majesties several duties upon vellum, parchment and paper, for four years, towards carrying on the war against France".[3]

Their names were lent to the second institution of higher learning in the United States, The College of William & Mary, which was founded in 1693 under a royal charter.