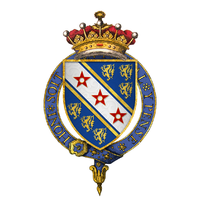 He was the fifth son of Humphrey de Bohun, 4th Earl of Hereford and Elizabeth of Rhuddlan. He had a twin brother, Edward. His maternal grandparents were Edward I of England and his first Queen consort Eleanor of Castile.

William de Bohun assisted at the arrest of Roger Mortimer in 1330, allowing Edward III to take power. After this, he was a trusted friend and commander of the king and he participated in the renewed wars with Scotland.[1]

In 1332, he received many new properties: Hinton and Spaine in Berkshire; Great Haseley, Ascott, Deddington, Pyrton and Kirtlington in Oxfordshire; Wincomb in Buckinghamshire; Longbenington in Lincolnshire; Kneesol in Nottinghamshire; Newnsham in Gloucestershire, Wix in Essex, and Bosham in Sussex.

In 1335, he married Elizabeth de Badlesmere (1313 – 8 June 1356). Her parents Bartholomew de Badlesmere, 1st Baron Badlesmere, and Margaret de Clare had both turned against Edward II the decade before. Elizabeth and William were granted some of the property of Elizabeth's first husband, who had also been Mortimer's son and heir.

William was created Earl of Northampton in 1337, one of the six earls created by Edward III to renew the ranks of the higher nobility. Since de Bohun was a younger son, and did not have an income suitable to his rank, he was given an annuity until suitable estates could be found.

In 1339 he accompanied the King to Flanders. He served variously in Brittany and in Scotland, and was present at the great English victories at Sluys and was a commander at Crécy.

His most stunning feat was commanding an English force to victory against a much bigger French force at the Battle of Morlaix in 1342. Some of the details are in dispute, but it is clear that he made good use of pit traps, which stopped the French cavalry.

In addition to being a warrior, William was also a renowned diplomat. He negotiated two treaties with France, one in 1343 and one in 1350. He was also charged with negotiating in Scotland for the freedom of King David Bruce, King of Scots, who was held prisoner by the English.

In Bernard Cornwell's series the Grail Quest, the Earl of Northampton plays a minor role as Thomas of Hookton's lord.