He established the de la Pole family as one of the primary houses of England through his mercantile and financial success, as well as initiating the foundation of the Charterhouse monastery in Hull.

William de la Pole is generally held to be the second eldest of three brothers; he had an elder brother and associate Richard de la Pole (died 1345) who was also a merchant, and a younger brother, John.[1] His date of birth has been estimated from 1295 to 1290 or possibly earlier.[2]

There is much confusion and differing opinion on William's parentage, though a father William, of either Ravenser or Hull is referred to in a number of sources. Historical research may have been muddled through the presence of more than one William de la Pole in Hull in the first half of the 14th century, one the nephew of the other; the younger was the son of William's brother Richard.[3] Harvey (1957) found no documentary evidence for a man named William de la Pole in either Hull or Ravenser prior to William and Richard, and on the brothers Richard and William stated: "Neither their parentage nor place of origin seem to have been revealed by the brothers, and these remain unsolved mysteries".[4]

Several Victorian era sources make the statement that his father was called William de la Pole,[5][6][7] as do the 17th century historians William Dugdale and William Camden.[8] Frost (1827) notes that the description of the father's status are subject to contradiction by historians: in some sources he is described as a merchant, in others as a knight.[5] A link to a William de la Pole, merchant of Totnes has also be suggested, but lacks evidence.[6]

A number of sources identify Elena as the mother of William and Richard, and as wife of William the father;[9] Elena is said to have remarried to a John Rotenheryng, merchant of Hull after the father's death.[5] Harvey (1957) surmises that the identification of Elena as the mother of William is an error, based on a misinterpretation of the text the will of John Rotenhering;[n 1] Harvey (1957) concludes that the brother's were orphans of an important family, and that John Rotenhering (of Hull) and Robert Rotenhering (of Ravenser), both important merchants, acted as guardians.[11] John Rotenhering appears to have been acted as the de la Pole brothers' guardian; much of his property passed to the brothers after his heir Alicia died in 1340 with no descendents.[11]

Frost (1827) proposes that Wiliam's father was Sir William de la Pole of Powysland (d.1305), fourth son of Sir Griffin de la Pole,[n 2] Harvey (1957) suggests that the brothers' parents may have been Sir Lewis (Llywelyn) de la Pole (d.1294) and his wife Sibilla; and their grandfather Sir Griffin de la Pole of London.[11] Circumstantial evidence for a more knightly and less mercantile background is provided by the brother's tutelage under important merchants and subsequent rapid rise, which included close links to the crown.[13]

Both William and his brother were originally merchants in Ravenser; by the 1310s he had moved to Kingston upon Hull,[n 3] Both William and his brother Richard were already notable merchants by the late 1310s: by 1317, they were deputies of the Royal Chief Butler and from 1321 to 1324 both were and chamberlains of the town.[17] In the 1320s William was exporting increasing quantities of wool from Hull, during the same period William had begun providing finance to Edward II relating to his conflict with the French over Gascony; loans of £1,800 and £1,000 are recorded in 1325, the brothers had also become significant figures within the town of Hull, their actions included a sum of £306 spent on improving the fortifications of Hull.[18]

After the downfall of Edward II, the brother's importance within the state increased as a consequence of the resumption of the wars with Scotland in 1327 during the reign of Edward III under the regency of Roger Mortimer and Queen Isabella; £4,000 was loaned for the Scottish campaign in 1327, in addition to £2,000 loaned for the pay of Dutch mercenaries employed during the ousting of Edward II;[14] By 1329 the total loans exceeded £13,000, amounts comparable to those provided by the traditional royal financiers, the Bardi of Florence.[19] The De la Poles financed the loans through lending from other merchants.[15] In return for these services the De la Poles obtained various privileges and other rewards from the crown: they obtained the manor of Myton in 1330; and in 1332 William became the first mayor of the town of Hull, a position he held until 1335; he also represented Hull in parliament in several years of the 1330s.[14] William and Richard de la Pole formally dissolved their partnership in 1331.[20][21]

William was increasingly in the service of the king during the 1330s, both acquiring supplies, as well as providing ships for his wars with the Scots, and commissioning and commandeering ships for the dynastic dispute with France that became known as the Hundred Years War.[22] He jointly managed the English Wool Company, set up by the king to finance his war through control of the wool trade;[23] Smuggling of wool caused financial hardship, and the collapse of the scheme – from June 1338 to October 1339 the king had to borrow over £100,000 from Pole; he acquired the estate of Burstwick (or lordship of Holderness) from the financially stricken king for £22,650, which brought about the king's resentment.[24][14] In 1339 he settled a loan of 50,000 florins from the Archbishop of Trier (Treves) in place of the king's crown, which had been used as collateral.[25] The same year De la Pole achieved the rank of Knight Banneret, and on 26 September 1339 he was made Baron of the Exchequer.[26]

In 1340 William and Richard de la Pole, as well as Sir John de Pulteney were arrested, he was charged in relation to the failure of the English Wool Company, and De la Pole was incarcerated at Devizes Castle and his lands seized; the charge was annulled in 1344.[27][26] Between 1343 and 1345 he returned to organising the financing of the king's wars through the foundation of a new company. During a period of peace in the 1350s, the king renewed the wool smuggling charges against De la Pole, forcing him to renounce his claim to the manor of Burstwick; in 1354 he signed a document cancelling all the king's debts to him in exchange for his pardon.[27][28]

In 1350 he founded a hospital in Hull, named the Maison Dieu; shortly before his death he obtained a license from Edward III for the foundation of a religious house, originally intended to be of the Order of Saint Clare; he died before it was completed, and the place was established by his son Michael de la Pole, 1st Earl of Suffolk as a Carthusian house dedicated to St. Michael (see Charterhouse, Kingston upon Hull).[29][26][n 4]

In many sources it is stated that he was buried in the Holy Trinity Church, Hull, at the tomb commonly known as the de la Pole tomb,[n 5] Fryde and others state that his final interment was with his wife Katherine (d.1382) in the church of the Carthusian monastery in Hull; which was not established until 1377.[32][33] 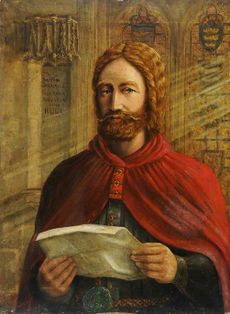 William's mercantile and financial prowess raised his family from relative obscurity to one of the primary families of the realm in a single generation.[35][36] At the end of the 14th century he was described in the 'Chronicle of Melsa' as "second to no other merchant of England" (nulli Angligenae mercatori postea secundus fuit).[37][26]

The descendants of William de la Pole were notable figures in English history for the next 150 years, including several Dukes of Suffolk, and descendants who took part in the actions of the 'Hundred Years' War' with France. The family's fortunes changed with the loss of the English throne by the House of York in the late 15th century. His direct male descendent William de la Pole (1478–1539) was incarcerated in the tower of London by Henry VII, and his possessions confiscated due to a potential claim to the throne as an heir to the deposed line from Richard III, he was executed on the command of Henry VIII in 1513.[38][39][32][40]