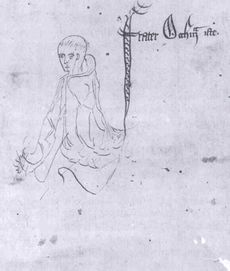 William of Ockham (/ˈɒkəm/; also Occam, from Latin: Gulielmus Occamus;[1][2] c. 1287 – 1347) was an English Franciscan friar and scholastic philosopher and theologian, who is believed to have been born in Ockham, a small village in Surrey.[3] He is considered to be one of the major figures of medieval thought and was at the centre of the major intellectual and political controversies of the fourteenth century. He is commonly known for Occam's razor, the methodological principle that bears his name, and also produced significant works on logic, physics, and theology. In the Church of England, his day of commemoration is 10 April.[4]

William of Ockham was born in Ockham, Surrey in 1285 and joined the Franciscan order at an early age.[5] It is believed that he studied theology at the University of Oxford from 1309 to 1321, but while he completed all the requirements for a master's degree in theology (the 14th century equivalent of a doctorate[citation needed]) he was never made regent master.[6] Because of this, he acquired the honorific title Venerabilis Inceptor, or "Venerable Beginner" (an inceptor was a student formally admitted to the ranks of teachers by the university authorities[7]).

During the Middle Ages, theologian Peter Lombard's Sentences (1150) had become a standard work of theology, and many ambitious theological scholars wrote commentaries on it.[8] William of Ockham was among these scholarly commentators. However, Ockham's commentary was not well received by his colleagues,[citation needed] or by the Church authorities. In 1324, his commentary was condemned as unorthodox by a synod of bishops[citation needed], and he was ordered to Avignon, France, to defend himself before a papal court.[8]

An alternative understanding, recently proposed by George Knysh, suggests that he was initially appointed in Avignon as a professor of philosophy in the Franciscan school, and that his disciplinary difficulties did not begin until 1327.[9] It is generally believed that these charges were levied by Oxford chancellor John Lutterell.[10][11] The Franciscan Minister General, Michael of Cesena, had been summoned to Avignon, to answer charges of heresy. A theological commission had been asked to review his Commentary on the Sentences, and it was during this that Ockham found himself involved in a different debate. Michael of Cesena had asked Ockham to review arguments surrounding Apostolic poverty. The Franciscans believed that Jesus and his apostles owned no property either individually or in common, and The Rule of Saint Francis commanded members of the order to follow this practice.[12] This brought them into conflict with Pope John XXII.

Because of the pope's attack on the Rule of Saint Francis, Ockham, Michael of Cesena and other leading Franciscans fled Avignon on 26 May 1328, and eventually took refuge in the court of the Holy Roman Emperor Louis IV of Bavaria, who was also engaged in dispute with the papacy, and became Ockham's patron.[8] After studying the works of John XXII and previous papal statements, Ockham agreed with the Minister General. In return for protection and patronage Ockham wrote treatises that argued for emperor Louis to have supreme control over church and state in the Holy Roman Empire.[8] "On June 6, 1328, Ockham was officially excommunicated for leaving Avignon without permission,"[6] and Ockham argued that John XXII was a heretic for attacking the doctrine of Apostolic poverty and the Rule of Saint Francis, which had been endorsed by previous popes.[6] However it should be noted that Ockham's philosophy was never officially condemned as heretical.[6]

He spent much of the remainder of his life writing about political issues, including the relative authority and rights of the spiritual and temporal powers. After Michael of Cesena's death in 1342, William became the leader of the small band of Franciscan dissidents living in exile with Louis IV. Ockham died (prior to the outbreak of the plague, or Black Death) on 9 April 1347.[13] He was officially rehabilitated by Innocent VI in 1359[citation needed].

William of Ockham believed "only faith gives us access to theological truths. The ways of God are not open to reason, for God has freely chosen to create a world and establish a way of salvation within it apart from any necessary laws that human logic or rationality can uncover."[14] Ockham's theism was based solely on private revelation[citation needed] and faith[citation needed](fideism). He believed that science was a matter of discovery and saw God as the only ontological necessity.[15] His importance is as a theologian with a strongly developed interest in logical method, and whose approach was critical rather than system building.[5] 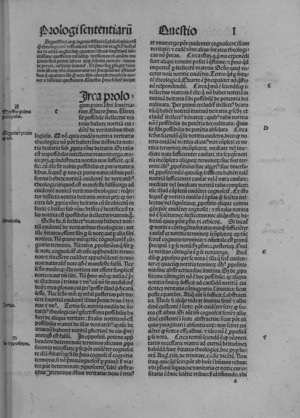 In scholasticism, Ockham advocated for a reform both in method and in content, the aim of which was simplification. Ockham incorporated much of the work of some previous theologians, especially John Duns Scotus. From Scotus, Ockham derived his view of divine omnipotence, his view of grace and justification, much of his epistemology[citation needed] and ethical convictions. However, he also reacted to and against Scotus in the areas of predestination, penance, his understanding of universals, his formal distinction ex parte rei (that is, "as applied to created things"), and his view of parsimony which became known as Occam's Razor.

Ockham was a pioneer of nominalism, and some consider him the father of modern epistemology, because of his strongly argued position that only individuals exist, rather than supra-individual universals, essences, or forms, and that universals are the products of abstraction from individuals by the human mind and have no extra-mental existence.[16] He denied the real existence of metaphysical universals and advocated the reduction of ontology. Ockham is sometimes considered an advocate of conceptualism rather than nominalism, for whereas nominalists held that universals were merely names, i.e. words rather than existing realities, conceptualists held that they were mental concepts, i.e. the names were names of concepts, which do exist, although only in the mind. Therefore, the universal concept has for its object, not a reality existing in the world outside us, but an internal representation which is a product of the understanding itself and which "supposes" in the mind the things to which the mind attributes it; that is, it holds, for the time being, the place of the things which it represents. It is the term of the reflective act of the mind. Hence the universal is not a mere word, as Roscelin taught, nor a sermo, as Abelard held, namely the word as used in the sentence, but the mental substitute for real things, and the term of the reflective process. For this reason Ockham has sometimes also been called a "terminist", to distinguish him from a nominalist or a conceptualist.[17]

Ockham was a theological voluntarist who believed that if God had wanted to, he could have become incarnate as a donkey or an ox, or even as both a donkey and a man at the same time. He was criticized for this belief by his fellow theologians and philosophers.[18]

One important contribution that he made to modern science and modern intellectual culture was efficient reasoning with the principle of parsimony in explanation and theory building that came to be known as Occam's Razor. This maxim, as interpreted by Bertrand Russell,[19] states that if one can explain a phenomenon without assuming this or that hypothetical entity, there is no ground for assuming it, i.e. that one should always opt for an explanation in terms of the fewest possible causes, factors, or variables. He turned this into a concern for ontological parsimony; the principle says that one should not multiply entities beyond necessity – Entia non sunt multiplicanda sine necessitate – although this well-known formulation of the principle is not to be found in any of Ockham's extant writings.[20] He formulates it as: "For nothing ought to be posited without a reason given, unless it is self-evident (literally, known through itself) or known by experience or proved by the authority of Sacred Scripture."[21] For Ockham, the only truly necessary entity is God; everything else is contingent. He thus does not accept the principle of sufficient reason, rejects the distinction between essence and existence, and advocates against the Thomistic doctrine of active and passive intellect. His scepticism to which his ontological parsimony request leads appears in his doctrine that human reason can prove neither the immortality of the soul nor the existence, unity, and infinity of God. These truths, he teaches, are known to us by revelation alone.

Ockham wrote a great deal on natural philosophy, including a long commentary on Aristotle's Physics. According to the principle of ontological parsimony, he holds that we do not need to allow entities in all ten of Aristotle's categories; we thus do not need the category of quantity, as the mathematical entities are not "real". Mathematics must be applied to other categories, such as the categories of substance or qualities, thus anticipating modern scientific renaissance while violating Aristotelian prohibition of metabasis.

In the theory of knowledge, Ockham rejected the scholastic theory of species, as unnecessary and not supported by experience, in favour of a theory of abstraction. This was an important development in late medieval epistemology. He also distinguished between intuitive and abstract cognition; intuitive cognition depends on the existence or non existence of the object, whereas abstractive cognition "abstracts" the object from the existence predicate. Interpreters are, as yet, undecided about the roles of these two types of cognitive activities.

Ockham was for complete separation of spiritual rule and earthly rule. He thought that the pope and churchmen have no right or grounds at all for secular rule like having property, citing 2 Tim. 2:4. That belongs solely to earthly rulers, who may also accuse the pope of crimes, if need be.[23]

After the Fall the God had given men, also non-Christians, two powers: private ownership and the right to set their rulers, who should serve the interest of the people, not some special interests. Thus he preceded Thomas Hobbes in formulating social contract theory along with earlier scholars.[23]

Ockham said that the Franciscans avoided both private and common ownership by using commodities, including food and clothes, without any rights, with mere usus facti, the ownership still belonging to the donor of the item or to the pope. Their opponents such as pope John XXII wrote that use without any ownership cannot be justified: "It is impossible that an external deed could be just if the person has no right to do it." [23]

Thus the disputes on the heresy of Franciscans lead Ockham and others formulate some fundamentals of economic theory and the theory of ownership.[23]

In logic, Ockham wrote down in words the formulae that would later be called De Morgan's Laws,[24] and he pondered ternary logic, that is, a logical system with three truth values; a concept that would be taken up again in the mathematical logic of the 19th and 20th centuries. His contributions to semantics, especially to the maturing theory of supposition, are still studied by logicians.[25][26] Ockham was probably the first logician to treat empty terms in Aristotelian syllogistic effectively; he devised an empty term semantics that exactly fit the syllogistic. Specifically, an argument is valid according to Ockham's semantics if and only if it is valid according to Prior Analytics.[27]

Ockham and his works have been discussed as a possible influence on several late medieval literary figures and works, especially Geoffrey Chaucer, but also Jean Molinet, the Gawain poet, François Rabelais, John Skelton, Julian of Norwich, the York and Townely Plays, and Renaissance romances. Only in very few of these cases is it possible to demonstrate direct links to Ockham or his texts. Correspondences between Ockhamist and Nominalist philosophy/theology and literary texts from medieval to postmodern times have been discussed within the scholarly paradigm of literary nominalism.[28] Erasmus criticized him together with Duns Scot as fuelling unnessary controversies inside the Church in his Praise of Folly.

The seventh volume of the Opera Philosophica contains the doubtful and spurious works.