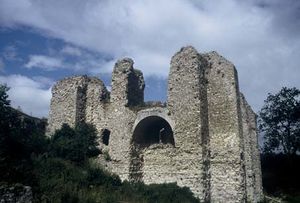 Castle of Arques built by William of Talou

William of Talou, Count of Talou (a.k.a. Arques)[lower-alpha 1] was a powerful member of the Norman ducal family who exerted his influence during the early reign of William the Conqueror Duke of Normandy.

He was the son of duke Richard II of Normandy by Papia of Envermeu.[1] His brother was Mauger, who became archbishop of Rouen in or shortly after 1037.[2] Their elder half-brothers were dukes of Normandy, Richard III from 1026 to 1027, and Robert I, Duke of Normandy from (1027 to 1035); Robert I being the father of William the Conqueror.[3]

In 1035, following the death of Duke Robert I on pilgrimage to Jerusalem, William of Talou challenged his nephew's right to succeed his father, basing his own claim on a legitimate descent from Richard II.[4] But the young Duke William had the backing of his powerful great-uncle, Robert II, the archbishop of Rouen.[1] When Archbishop Robert died in 1037 there a power vacuum and all of Normandy fell into disorder.[5] In an apparent attempt to help stabilize the situation Mauger was made archbishop in Robert's place; and his brother William was made count of Talou,[5] but, according to William of Jumièges, he was to hold his countship as a benefice in return for his faithful service to the young Duke William.[6]

The immediate result was that Archbishop Mauger and Count William occupied themselves with increasing their wealth and power in their new respective positions, independent of Duke William.[7] But William of Talou continued to intrigue in plots against his young nephew, being careful his name did not come up in any of the revolts or conspiracies.[8] But in 1049 at the battle of Domfront, Count William of Talou deserted his suzerain Duke William in the midst of the battle,[9] and denouncing his oath of vassalage he returned to his castle at Arques and began organizing his own rebellion.[10] Duke William repeatedly send messengers summoning his uncle, Count William, to attend him and show his allegiance; but in his arrogance the Count of Talou scorned each of these and secured himself in his castle.[11] The events that followed are as recalled by the Conqueror himself in his deathbed speech in 1087:

William of Talou's rebellion lasted from 1052 to 1054 at which time he was expelled from Normandy and fled to the court of Eustace II, Count of Boulogne.[13] Both uncles, William of Talou and Mauger, despite being defeated and exiled were provided with generous incomes to live on by the Conqueror.[5] After William de Talou there would not be another Count in the Pays de Talou.[14]