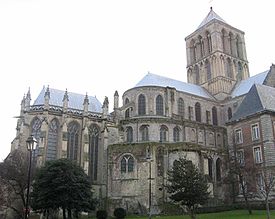 He was born on the family citadel on the island of San Giulio, Lake Orta, Novara, Piedmont. The son of Count Robert of Volpiano, he was born during an assault on the citadel by the Emperor Otto. The assault being successful, Otto became the sponsor and patron of Count Robert's son.[1]

The fourth son of Count Robert, in 969, at the age of seven, he began his education at the Benedictine abbey at Locadio, Vercelli.[1] He became a monk at this abbey. In 987, he became a monk at the Abbey of Cluny under Saint Majolus. Zealous for reform, he reorganized Saint-Sernin abbey on the Rhône River.

William was ordained in 990 and served as abbot of Saint Benignus' Abbey at Dijon, dedicated to Saint Benignus of Dijon. Under William's direction, and his zeal for the Cluniac reform, St. Benignus' became a center of spirituality, education, and culture.[2] It also became the mother house of some forty other monasteries in Burgundy, Lorraine, Normandy, and northern Italy.[1]

He was chosen as building contractor for Mont Saint-Michel in the 11th century. He designed the Romanesque church of the abbey, daringly placing the transept crossing at the top of the mount. Many underground crypts and chapels had to be built to compensate for this weight. These formed the basis for the supportive upward structure that can be seen today. He also rebuilt the Abbey of Saint-Germain-des-Prés.

In 1001, he was called to reform the Abbey of Fécamp (present-day department of Seine-Maritime) by Richard II, where the Dukes of Normandy had their palace and had chosen to be buried.