Williamsport is a city in and the county seat of Lycoming County, Pennsylvania, United States.[4] In 2009, the population was estimated at 29,304. It is the principal city of the Williamsport, Pennsylvania Metropolitan Statistical Area, which has a population of about 117,000.

Williamsport was settled by Americans late in the 18th century and the town began to prosper due to its lumber industry. By the early 20th century the town reached the height of its prosperity and the population has since declined by about a third from its peak of around 45,000 in 1950.

Colonial settlement in what is today Williamsport dates back to 1786 but the area was previously inhabited by the Iroquois. Williamsport was incorporated as a borough on March 1, 1806, and as a city on January 15, 1866. In the late 19th century Williamsport was known as "The Lumber Capital of the World" because of its thriving lumber industry. The city is the original home of Little League Baseball, founded in 1939 as a three-team league. Following World War II the city's population and economic prosperity have declined.

In 1763 the Battle of Muncy Hills took place during the French and Indian War. It was a clash between the Native Americans and colonists seeking homestead sites in Native American territory.[5] In 1768, at the Treaty of Fort Stanwix, the British purchased the land that became Lycoming County from the Iroquois Nation who controlled the lands.[5]

In 1786 the first house was built in Williamsport. James Russell built his inn on what is now the corner of East Third and Mulberry Streets in downtown.[6] On April 13, 1795 Lycoming County was formed from Northumberland County. It encompassed all the lands of Northumberland County situated west of Muncy Hills and was a domain of 12,500 square miles (32,000 km2), comprising most of north central Pennsylvania.[5] In 1796 the first recorded childbirth in Williamsport was James Russell the son of Mr. and Mrs. William Russell and grandson of James Russell of the Russell Inn[6] and the first school was built as a one-room log addition to the building that would eventually become the first Lycoming County Courthouse.[6] In 1798 the first brick house in Williamsport was erected on Front Street, between Market and Mulberry, by Andrew Tulloh, a lawyer. The bricks were made on the banks of Grafius Run where that stream crossed Hepburn Street.[5] 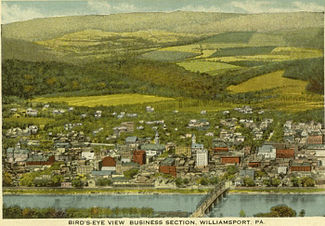 In 1799, a post office opened at the corner of Third and State Streets in what is now downtown,[6] and the following year, a jail was constructed at the northeast corner of William and Third Streets.[5] The post office was later converted to a saloon,[6]

In 1801 the town's first store was opened by William Winter on Third Street.[6] In 1831 Jacob L. Mussina established the Repasz Band, the oldest brass band in America still in existence.[5] On Oct. 15 1834 The West Branch Canal opened and the first boat to pass through the canal en route to Jersey Shore was that of George Aughenbaugh. The first freight carried into town was iron for the foundry of John B. Hall.[5] The same year the enactment of the common school law by Pennsylvania Legislature led to public education here. In May 1835, the first public schools opened in Williamsport and also the town's first bank, the West Branch National Bank.[5]

From 1830 until 1865, the underground railroad, a system of safe houses and routes for slaves escaping to freedom, operated in Lycoming County; many local abolitionists, including Daniel Hughes, served as conductors and agents.[5] 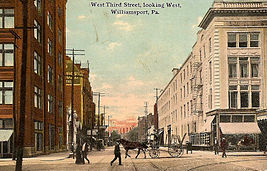 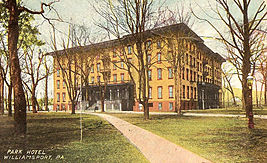 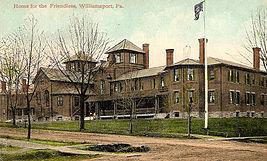 Williamsport Home for the Friendless, c. 1910

In 1849 the Market Street Bridge was built over the West Branch Susquehanna River. It was opened as a toll bridge to cover the state's costs of $23,797.[6] In 1854 a brewery opened. The brewery was sold to Henry Flock in 1865. This brewery was run by the Flock family until the 1940s. The Flock's business survived Prohibition by converting to a dairy.[6]

In 1875 the first tower clock in the United States to sound the Cambridge Quarters (Westminster Chime) was installed at Trinity Episcopal Church, a gift of Peter Herdic with bells given by the Honorable Judge J. W. Maynard. The following year the Williamsport Hospital opened its first facility April 1 at Elmira and Edwin Streets.[5]

In 1881 a state law ended racial segregation in Pennsylvania schools. By 1948, all schools in this area were integrated.[5] In 1895 Harry Houdini appeared in one of his earliest performances at the Old Fair Grounds with The Welch Brothers Circus.[7]

Williamsport was the birthplace of the national newspaper Grit in 1882. Williamsport once had more millionaires per-capita than anywhere else in the world.[citation needed] For this reason, the area's local high school, the Williamsport Area High School, uses "Millionaires" as its team nickname.

The Flood of March 17–18, 1936 caused the river to crest at 33.9’. Flood waters reached High Street. It was known locally as the Hello, Al flood because Al Glaes, operating a short-wave radio station from his home on High Street, kept the city in touch with the rest of the world after the flood disrupted electricity and telephone service.[5]

On June 6, 1939 the first Little League Baseball game was played on a sandlot outside Bowman Field in Williamsport. Carl Stotz conceived the idea of a Little League, and he and Bert and George Bebble managed the first three teams.[5] In 1941 the U.S. entered World War II after the Japanese attacked Pearl Harbor. Williamsport native Joe Lockard, stationed on Oahu, gave warning of the impending attack based on radar readings. His readings were dismissed as American B17 bombers coming in from the mainland.[5] Also in 1941 the Williamsport School Board created the Williamsport Technical Institute for high school and post-high school students. It grew into the Williamsport Area Community College, and later became Pennsylvania College of Technology.[5]

Williamsport is located at Lua error in Module:Coordinates at line 668: callParserFunction: function "#coordinates" was not found. (41.244428, −77.018738),[8] and is bordered by the West Branch Susquehanna River to the south (with Armstrong Township, South Williamsport, Duboistown and Susquehanna Township south of the river), Loyalsock Township to the east and north, Old Lycoming Township to the north and Woodward Township to the west.[9] As the crow flies, Lycoming County is about 130 miles (209 km) northwest of Philadelphia and 165 miles (266 km) east-northeast of Pittsburgh.

Neighborhoods of Williamsport include: 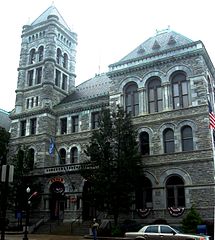 Williamsport operates on a "Strong Mayor" form of government, meaning the mayor is given almost total administrative authority and a clear, wide range of political independence with the power to appoint and dismiss department heads without council approval and little need for public input. The mayor is Gabriel J. Campana.[21] 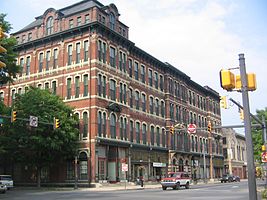 The Weightman Block in downtown Williamsport was built by Peter Herdic 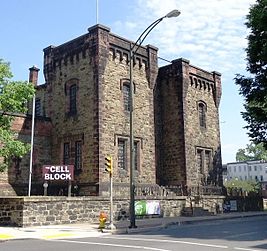 Lycoming County Prison was built between 1799 and 1801, today it is a popular night club.

Williamsport is noted for the Lycoming aircraft engines which is a division of Avco Corporation and a subsidiary of Textron. Brodart, a library supplies company, is also based in Williamsport. Shop-Vac is headquartered in the Newberry section of Williamsport and manufactures wet/dry vacuums and accessories for consumer, industrial, commercial and contractor uses. Overhead Garage Door is also located in Newberry.[citation needed] Bethlehem Wire Rope, a 46-acre (190,000 m2) manufacturing complex in Williamsport, with over 620,000 square feet (58,000 m2) under roof, is the single largest wire rope manufacturing facility in North America.[22][unreliable source?]

Recently, interest has grown in extracting natural gas in the Williamsport area.[23] Williamsport has become a key area in the Marcellus Shale drilling.[citation needed]

Lonza Group, a Swiss biotechnology and pharmaceutical company, has a large manufacturing site on the western fringes of the city, where a number of specialty chemicals are made that go into a wide array of oilfield, nutritional, personal care, and industrial applications.[citation needed]

The Williamsport Downtown Gateway Revitalization Project began in 2004 in order to attract more people (both citizens of the Williamsport community and visitors) to the Downtown Williamsport area.[citation needed] The construction on the Carl E. Stotz Memorial Little League Bridge, the first of many projects, began in June 2004 and was completed in 2008.

Williamsport Area School District has a renowned music program, ranked in the Top 100 in the country.[citation needed] 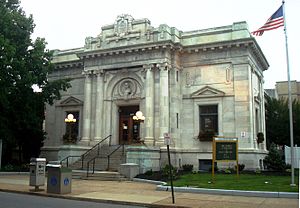 The James V. Brown Library is Williamsport's public library. The library has a staff of nearly 50 full and part-time employees, and offers volunteer opportunities for youth and adults.[citation needed] With a collection of nearly 150,000 units it offers books, DVDs, CDs, and other resources, while the library offers wireless Internet access, local history archives, the Lycoming County Law Library, and premium online reference resources. As the headquarters for the county library system, the Brown Library serves almost 87,000 patrons, some years[vague] circulating upwards of 550,000 books both in-house and through its traveling Storymobile.[citation needed] The James V. Brown offers preschool and early learning opportunities, as well as programs for teens and adults. The library, led by local retired physician Dr. William R. Somers, constructed a children's wing in 2009 to target educational and social resources to young people from birth through the second grade. The library has since been able to bolster its school-age programming to include teen and tween populations, offering a variety of after-school gaming clubs, arts and crafts programs, and social events that occur on a regular basis. The library’s after-school café also provides reading and study incentives for young students. The Pennsylvania Department of Education, the Office of Commonwealth Libraries, and the Bureau of Library Development funds the statewide online resource "Ask Here PA", a free chat service that provides Williamsport and other Pennsylvania library patrons with access to 24/7 reference support.

Susquehanna Health is a four hospital integrated health system including:

Williamsport Regional Medical Center was recognized as one of the 2011 Thomson Reuters 50 Top Heart Hospitals in the nation.[25] 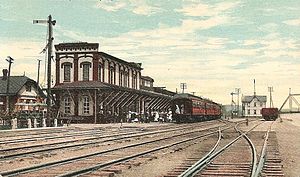 Williamsport Regional Airport (IPT), located several miles east of the city in the borough of Montoursville, has three flights daily via US Airways (as of January 2009).[26] Susquehanna Trailways provides daily long distance bus service from a station in the downtown to Elmira, New York, Harrisburg, New York City, and Philadelphia.[27] Local bus service within Williamsport and to other places in Lycoming County is offered by River Valley Transit.[28]

Williamsport is served by several major highways, including Interstate 180, U.S. Route 15, and U.S. Route 220. I-180 and US 220 run together northeast/southwest through Williamsport, and US 15 joins (in the opposite direction) for two miles.[29] Once completed, Interstate 99 will enter Williamsport from the southwest on US 220 and continue north on US 15, joining only one at a time.

There is no passenger rail service but until the mid-20th century Williamsport was a major transfer point between the Pennsylvania Railroad, Reading Railroad, and New York Central Railroad and direct passenger services were provided to New York City, Buffalo, Harrisburg, Washington D.C., and Philadelphia. Freight rail service (west to Avis and east to Muncy) is provided by the Lycoming Valley Railroad, which has its main yard in the Newberry section of Williamsport, and offers connections to the Norfolk Southern and Canadian Pacific railroads.[30]

The West Branch Susquehanna River is not navigable, but a dam at Hepburn Street provides a large lake for recreational boating, including outings on the mock paddlewheeler Hiawatha from Susquehanna State Park.[31]

The Little League World Series is held annually on the south side of the West Branch Susquehanna River in South Williamsport, where Little League Baseball now has its headquarters.

Each year the Susquehanna 500 Mini Indy Gokart Racing Series competes in Brandon Park. The Saturday-Sunday event is held each year, usually the third weekend of September with all proceeds going to the North Central Pennsylvania Chapter of the American Red Cross. The 2013 event will be the 17th annual. About $400,000 has been raised since its inception.

TV stations in Williamsport are served by the Scranton/Wilkes-Barre market.