Wilson's Raid was a cavalry operation through Alabama and Georgia in March–April 1865, late in the American Civil War. Brig. Gen. James H. Wilson led his Union Army Cavalry Corps to destroy Southern manufacturing facilities and was opposed unsuccessfully by a much smaller force under Confederate Lt. Gen. Nathan Bedford Forrest.

After his victory at the Battle of Nashville, Union Maj. Gen. George H. Thomas and his Army of the Cumberland found themselves with virtually no organized military opposition in the heart of the South. Thomas ordered Brig. Gen. James H. Wilson (who commanded the Cavalry Corps of the Military Division of the Mississippi, but was attached to Thomas's army) to lead a raid to destroy the arsenal at Selma, Alabama, in conjunction with Maj. Gen. Edward Canby's operations against Mobile. Selma was strategically important as one of the few Confederate military bases remaining in Southern hands. The town contained an arsenal, a naval foundry, gun factories, a powder mill, military warehouses, and railroad repair shops.

Wilson was delayed in crossing the rain-swollen Tennessee River, but he got underway on March 22, 1865, departing from Gravelly Springs in Lauderdale County, Alabama. He sent his forces in three separate columns to mask his intentions and confuse the enemy; Forrest learned very late in the raid that Selma was the primary target. Minor skirmishes occurred at Houston (March 25) and Black Warrior River (March 26), and Wilson's columns rejoined at Jasper on March 27. 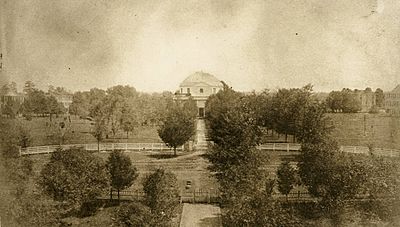 View of the Quad at the University of Alabama in 1859. The Rotunda can be seen at center, with the halls visible in the background. All of these buildings were destroyed during Wilson's Raid on April 4, 1865.

On March 28, at Elyton, near present-day Birmingham, another skirmish occurred and the Union troopers destroyed the Oxmoor and Irondale iron furnaces. A detachment of General Emory Upton's division destroyed the C.B. Churchill and Company foundry in Columbiana[1] and the Shelby Iron Works in Shelby on March 31, 1865.[2]

Wilson also detached a 1,500 man brigade under Brig. Gen. John T. Croxton and sent them south and west to burn the Roupes Valley Ironworks at Tannehill and Bibb Naval Furnace at Brierfield on March 31. They then burned the University of Alabama at Tuscaloosa, the site of a prominent military school, on April 4.[3] This movement diverted Chalmer's division away from Forrest's main force.

On March 31, Forrest was routed by the larger, better-armed Union force at Montevallo. The cavalrymen under Chalmers had not arrived to reinforce Forrest, but he could not wait. During the action, Forrest's headquarters were overrun and documents captured that gave valuable intelligence concerning his plans. Wilson dispatched McCook to link up with Croxton's brigade at Trion (now Vance) and then led the remainder of his force rapidly toward Selma. Forrest made a stand on April 1 at Plantersville, near Ebenezer Church, and was routed once again at the Battle of Ebenezer Church. The Confederates raced toward Selma and deployed into a three-mile, semicircular defensive line anchored at both ends by the Alabama River.

The Battle of Selma took place on April 2. The divisions of Long and Upton assaulted Forrest's hastily constructed works. The dismounted Union troopers broke through by afternoon, after brief periods of hand-to-hand combat; the inexperienced militiamen abandoning their positions and fleeing was the primary reason for the entire line breaking. General Wilson personally led a mounted charge of the 4th U.S. Cavalry against an unfinished portion of the line. General Long was severely wounded in the head during the assault. Forrest, who was also wounded, and whose tiny corps was severely damaged, regrouped at Marion, where he finally rejoined with Chalmers. Wilson's men worked for over a week at destroying military facilities. From there, Wilson's forces moved toward Montgomery, which they occupied on April 12.

Word reached the Union force of Robert E. Lee's April 9 surrender but the raid continued, heading east into Georgia to destroy the remaining arsenals and munitions and cause any remaining local forces to "disintegrate."[4] Before Wilson could do just that, there were several key bridges over the Chattahoochee River that needed taking. One such bridge led into the town of West Point. To avoid any delay in the raid, Wilson separated his force sending a 3,700-man detachment under Colonel Oscar Hugh La Grange to capture both the bridge and the town.[5] Thus, the Battle of West Point, Georgia, was fought on Easter Sunday, April 16, when Colonel Oscar Hugh La Grange's brigade attacked an earthwork defensive position named Fort Tyler.

Fort Tyler was defended by a couple hundred young men and teenaged Confederates under CS Brig. Gen. Robert C. Tyler. Determined to fight to the last ditch, the Confederates fought a wave of dismounted Union troops. The Confederates did not stand a chance as they were largely outnumbered and armed poorly, whereas the Federals were armed with repeaters. The Union soldiers crossed over a ditch while the Rebels hurled primitive hand-grenades and fired their weapons bravely.[6] Although the Union men had to assault under the fire of one 32-pounder gun and two 12-pounders inside the earthwork, the fort was captured. Confederate Brig. Gen. Robert C. Tyler was mortally wounded by a sharpshooter, becoming the last general officer to be killed in the Civil War.

The defense of West Point was doomed to fail, and had done so. With Rebel prisoners, the fort, and bridge in his hands, La Grange moved out to rejoin Wilson. The battle had been won for the Union at a cost of 36 casualties in killed and wounded. The Confederates had lost 18 men killed, 28 wounded, and the remainder captured. With most of the dead southerners in the fort, one Yankee artilleryman said the dead Confederates wore "a awful look."[7]

Finally on Easter Sunday, April 16, Wilson was victorious in the Battle of Columbus, Georgia, in which Upton's division clashed with Confederate forces at Columbus, capturing the city and its naval works and burning, then scuttling the incomplete ironclad ram, CSS Jackson. This engagement is widely regarded as the "Last Battle of the Civil War."[8][9] On April 20, Wilson's men captured Macon, Georgia, without resistance, and Wilson's Raid came to an end. This was only six days before General Joseph E. Johnston's surrender of all Confederate troops in the Carolinas, Georgia, and Florida to William Tecumseh Sherman, in North Carolina.

Aftermath and capture of Jefferson Davis

Wilson's Raid had been a spectacular success. His men captured five fortified cities, 288 cannon, and 6,820 prisoners, at a cost of 725 Union casualties. Forrest's casualties, from a much smaller force, numbered 1,200. The raid was done without the disastrous collateral damage that characterized Sherman's March to the Sea of the previous year. Unlike Sherman, Wilson and his commander, George H. Thomas, did not tolerate uncontrolled behavior, such as looting, from their men. Residents accused Wilson's men of sacking Selma after the battle, but the damage there came from many sources including street combat that continued into the night, as well as 35,000 bales of cotton and the Central Commercial Warehouse fired by Confederates as the city fell. Some Union soldiers and newly liberated former slaves did engage in plunder. After the first night, Wilson re-established discipline.[10]

Upon conclusion of the raid, and following the surrender of all of the Confederate forces east of the Chattahoochee River by Johnston to Sherman, the hostilities ended. However, the pursuit of fleeing officials of the Confederate government commenced as Wilson's forces fanned out through the region. Confederate President Jefferson Davis was captured on May 10, 1865, near Irwinville, Georgia.[11]