The county was formed in 1855 from parts of Edgecombe County, Johnston County, Nash County, and Wayne County. It was named for Louis Dicken Wilson, a state legislator from Edgecombe County and a colonel in the Mexican-American War, who died of fever at Veracruz in 1847.

Wilson County Government is a member of the regional Upper Coastal Plain Council of Governments.

Wilson County has several law enforcement agencies. Those agencies are as follows: 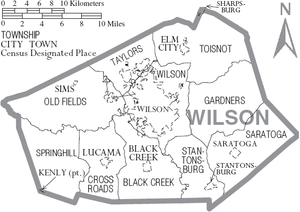