Wiltshire Council is the unitary authority for most of the ceremonial county of Wiltshire, in the West of England, created in April 2009. It is the successor authority to Wiltshire County Council (1889–2009) and also to four district councils—Kennet, North Wiltshire, Salisbury, and West Wiltshire—all of which had been created in 1973 and were abolished in 2009.

The council is led by Jane Scott (Conservative), who had previously led the former Wiltshire County Council since 2003.

Establishment of the unitary authority 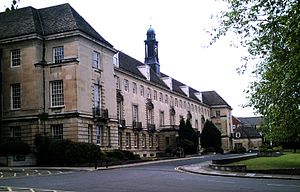 The ceremonial county of Wiltshire consists of two unitary authority areas, Wiltshire and Swindon, administered respectively by Wiltshire Council and Swindon Borough Council. Before April 2009, Wiltshire was administered as a non-metropolitan county by Wiltshire County Council, with four districts, Kennet, North Wiltshire, Salisbury, and West Wiltshire. Swindon, in the north of the county, had been a separate unitary authority since 1997, and on 5 December 2007 the British Government announced that the rest of Wiltshire would move to unitary status. This was later put into effect by a statutory instrument as part of the 2009 structural changes to local government in England. To date, this has been one of the most successful Unitary initiatives in the UK, achieved on time and under budget, and gaining a glowing report from the DCLG.[2]

With the abolition of the District of Salisbury, a new Salisbury City Council was created at the same time to carry out several city-wide functions and to hold the City's charter.

The unitary authority provides all significant local government services to 435,000 Wiltshire residents and is also the biggest employer in Wiltshire, being responsible for schools, social services, rubbish collection and disposal, county roads, planning, and leisure services, among other things.

Most executive decisions are taken by the authority's cabinet, each member of which has a particular area of responsibility. Development control is undertaken by five planning committees, the powers of which cannot be exercised by the cabinet. Members of the authority are appointed to a wide range of 'outside bodies', providing them with some element of democratic accountability, such as the Kennet and Avon Canal Trust, the Wiltshire Victoria County History, and the Wiltshire Historic Buildings Trust.

As a result of the first elections to the new authority, plus two by-elections held in September 2009 and December 2010, an Independent joining UKIP while remaining in the Independent group,[3] a defection in May 2012 by one Liberal Democrat councillor to the Conservatives,[4] and in November 2012 by another Lib Dem and one Conservative to the Independents,[5] by the beginning of 2013 Wiltshire Council consisted of 61 Conservatives, 22 Liberal Democrats, ten Independents, including one UKIP member, three Devizes Guardians, and two Labour members.

The elections of May 2013 produced an unexpected swing to the Liberal Democrats, who made a net gain of five seats, while all three Devizes Guardians lost their seats to the Conservatives and there was an increase of two in the Labour group numbers, which doubled from two to four. The overall result was 58 Conservatives, 27 Liberals, eight Independents, four Labour, and one UKIP member.[6] However, during the following year four Liberal Democrats defected from their political group, one to the Conservatives and three to the Independents, and at a by election in May 2015 at Chippenham Hardenhuish the Conservatives gained a seat from the Liberals.

Wiltshire Council operates from the same Trowbridge base as the old Wiltshire County Council. In 2012 the County Hall building was revamped at a cost of about 24 million pounds. The remodelled New County Hall includes benefits services and housing advice, the Trowbridge library, the town's Register Office, and a cafe.[7][8][9]