From Infogalactic: the planetary knowledge core
(Redirected from Winberry)
Jump to: navigation, search
For other uses, see Bilberry (disambiguation). 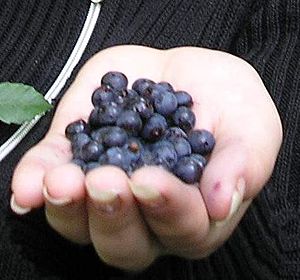 Other vernacular or local names

Bilberry (especially Vaccinium myrtillus) is also known in English by other names including blaeberry /ˈbleɪbɛri/ in Scotland,[1] whortleberry /ˈhwɜːrtəlbɛri/ in southern England,[1] (ground) hurts, whinberry, winberry, windberry, wimberry, myrtle blueberry and fraughan. In several other European languages its name translates as "blueberry", and this may cause confusion with the related plants more usually known as "blueberry" in American English, which are in the separate section Cyanococcus of the genus Vaccinium. The bilberry is native to Europe including the British Isles, while the blueberry is native to North America.

Bilberries include several closely related species of the Vaccinium genus, including: 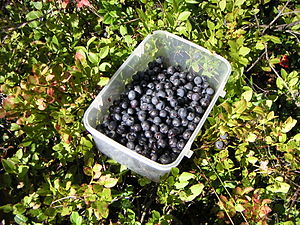 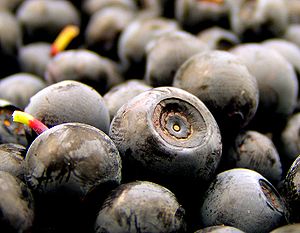 Bilberries are found in acidic, nutrient-poor soils throughout the temperate and subarctic regions of the world. They are closely related to North American wild and cultivated blueberries and huckleberries in the genus Vaccinium. One characteristic of bilberries is that they produce single or paired berries on the bush instead of clusters, as the blueberry does. Blueberries have more evergreen leaves.

Bilberries are dark in color, and usually appear near black with a slight shade of purple. While blueberry fruit pulp is light green in color, bilberry is red or purple, possibly staining the fingers, lips, and tongue of consumers when eating the raw fruit, a color effect from significant anthocyanin content.[2]

Bilberries are difficult to grow and have small fruits, and are thus seldom cultivated. Fruits are mostly collected from wild plants growing on publicly accessible lands throughout northern and central Europe, where they are plentiful – for example, up to a fifth (17-21%) of the land area of Sweden contains bilberry bushes.[3] Bilberries can be picked by a berry-picking rake like lingonberries, but are more susceptible to damage.

Bilberries are softer and juicier than blueberries, making them difficult to transport. Because of these factors, the bilberry is only available fresh on markets and in gourmet stores. Frozen bilberries however are available all year round in most of Europe.

In Finland, bilberries are collected in forests. They are eaten fresh or made into jams and dishes. The most famous one is bilberry pie (Finnish: mustikkapiirakka, Swedish blåbärspaj).

In Iceland, bilberries (known as aðalbláber, or "prime blueberry") grow predominantly in Westfjords and the surrounding area. In most of the country, the closely related bláber occupy the same habitat. Both species are commonly found growing with dwarf birch and crowberries. Wild growth is vast compared to the population of Iceland and wildharvesting is legal. As a consequence, it is a popular activity in August when the berry season peaks. A popular use for bilberries is to eat them with skyr.

In Ireland, the fruit is known as fraughan, from the Irish fraochán, and is traditionally gathered on the last Sunday in July, known as "Fraughan Sunday".

Bilberries were also collected at Lughnasadh in August, the first traditional harvest festival of the year, as celebrated by Gaelic people. The crop of bilberries was said to indicate how well the rest of the crops would fare in their harvests later in the year.

In Poland, the fruit are known as jagody. They are gathered in forests. They are hugely popular in Poland, either eaten fresh (mixed with sugar), put into sweet buns as a filling (such a bun is called a jagodzianka and is one of the most popular bakery products during summer in Poland), or used to make jams (known for their health benefits in the treatment of diarrhoea). They are sometimes served with sweet smetana.

The fruits are eaten fresh or made into jams, fools, juices or pies. In France and Italy they are used as a base for liqueurs and are a popular flavouring for sorbets and other desserts. In Brittany they are often used as a flavoring for crêpes, and in the Vosges and the Massif Central bilberry tart (tarte aux myrtilles) is a traditional dessert. In Romania they are used as a base for a liqueur called afinată – the name of the fruit in Romanian is afină. There is a North Korean Bog Bilberry Brandy (Paektusan Tuljjuksul) reportedly available at the DMZ.[4]

Bilberry is used as a food plant by the larvae of some Lepidoptera species (see the list of Lepidoptera that feed on Vaccinium).

Bilberry plants can suffer from bilberry blight,[5] caused by Phytophthora kernoviae. There have been severe outbreaks in Staffordshire, England.[6]

Often associated with improvement of night vision, bilberries are mentioned in a popular story of World War II RAF pilots consuming bilberry jam to sharpen vision for night missions. One review found no such effect[7] and origins of the RAF story cannot be found.[8]

Bilberries contain diverse anthocyanins, including delphinidin and cyanidin glycosides.[2][9] Bilberries have been used in a variety of folklore and traditional medicine, but there are no proven anti-disease effects from consuming them.[8][10]