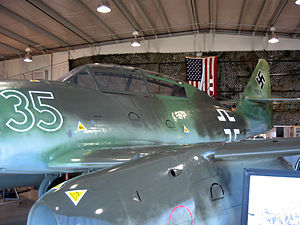 While the name 'Wings of Freedom Aviation Museum' has a relatively short history, the displaying of aircraft at Willow Grove began shortly after World War II. In May 1946, LCdr. David Ascher arrived at NAS Willow Grove as the station’s first Aircraft Maintenance Officer. A few months later, a local high school acquired a P-40E “Kittyhawk” from the Army Air Force but, after deciding not to keep it, the school turned it over to the Navy. Ascher led the movement to modify the aircraft and change the markings to those of a “Flying Tiger,” thus making the P-40E the first aircraft displayed at Willow Grove. LCdr Ascher remained at NAS Willow Grove until 1952 when he was transferred to the Naval Reserve Air Station at Niagara Falls Airport, NY. Ascher died in 2006 at the age of 94 but his acquisition and preserving of several aircraft began Willow Grove’s long history of displaying military aircraft for the public to view.

In May 2002, the DVHAA broke ground along Route 611 for the building that now holds the museum's artifact collection. By August 2003, the building that became the Wings of Freedom Aviation Museum was ready to hold and display artifacts. For the first few months, there was no heat or power so it was not until Spring 2004 that the doors of the museum officially opened to the public.