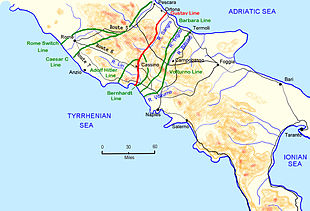 The Winter Line was a series of German military fortifications in Italy, constructed during World War II by Organisation Todt. The primary Gustav Line ran across Italy from just north of where the Garigliano River flows into the Tyrrhenian Sea in the west, through the Apennine Mountains to the mouth of the Sangro River on the Adriatic coast in the east. There were two subsidiary lines, the Bernhardt Line in front of the main Gustav positions, and the Hitler Line five miles behind it.

The centre of the Gustav line crossed the main route north to Rome at strategically crucial Highway 6. It followed the Liri Valley and was anchored around the mountains behind the town of Cassino. Above it stood the ancient Benedictine sanctuary of Monte Cassino, which dominated the valley entrance, and Monte Cairo, which gave the defenders clear observation of potential attackers advancing towards the valley mouth. A bloody and protracted battle was waged over the monastery, known as the Battle of Monte Cassino. The north end of the line was held by the coastal town of Ortona, captured in the fierce Battle of Ortona in December 1943 which became known as "the little Stalingrad".

On the western side of the Apennines were two subsidiary lines, the Bernhardt Line in front of the main Gustav positions, and the Hitler Line some 5 miles to the rear. The Winter Line was fortified with gun pits, concrete bunkers, turreted machine-gun emplacements, barbed-wire and minefields. It was the strongest of the German defensive lines south of Rome. About 15 German divisions were employed in the defence. It took the Allies from mid-November 1943 to late May 1944 to fight through all the various elements of the Winter Line, including the well-known battles at Monte Cassino and Anzio.

Some authorities define the Bernhardt Line as crossing Italy from coast to coast following not just the western defensive positions described above but incorporating also the eastern defences of the Gustav Line. Other authorities use the Winter Line name interchangeably with the Gustav Line as defined above. 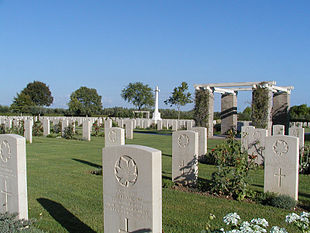