Wismar (German pronunciation: [ˈvɪsmaʁ]) is a port and Hanseatic city in Northern Germany on the Baltic Sea, in the state of Mecklenburg-Vorpommern. It is located about 45 km (28 mi) east of Lübeck and 30 km (19 mi) north of Schwerin, and is part of the Hamburg Metropolitan Region. Its natural harbour, located in the Bay of Wismar, is well-protected by a promontory. The population was 42,219 in 2013. It is the capital of the district of Nordwestmecklenburg since the September 2011 district reforms.

A unique representative of the Hanseatic League city type, with its Brick Gothic constructions and many patrician gable houses, Wismar has been included in the UNESCO list of World Heritage Sites since 2002, together with the historical core of Stralsund.

Wismar in the 16th century

Founded by the Polabians as Vishemir[2] and later settled by the Germans, Wismar is said to have received its civic rights in 1229, and came into the possession of Mecklenburg in 1301. In 1259 it had entered a pact with Lübeck and Rostock, in order to defend itself against the numerous Baltic sea pirates. This developed into the Hanseatic League. During the 13th and 14th centuries it was a flourishing Hanseatic town, with important woollen factories. Though a plague carried off 10,000 of the inhabitants in 1376, the town seems to have remained tolerably prosperous until the 16th century.

Under the Peace of Westphalia in 1648 Wismar passed into the possession of Sweden, with a ruling house from which it acquired its name. Through Wismar and the other dominions in the Holy Roman Empire, the Swedish monarchs in their roles as princes, or Reichsfürsten, took part in the Imperial Diets. From 1653 it was the seat of the highest court for that part of Sweden. In 1803 Sweden pledged both town and lordship to Mecklenburg for 1,258,000 Riksdaler, reserving, however, the right of redemption after 100 years. In view of this contingent right of Sweden, Wismar was not represented at the diet of Mecklenburg until 1897. In 1903 Sweden finally renounced its claims on the town. Wismar still retains a few relics of its old liberties, including the right to fly its own flag.

At the turn of the 19th century the most important manufacturing industries of Wismar were iron, machinery, paper, roofing-felt and asphalt. There was also considerable trade, especially by sea, in exports including grain, oil-seeds and butter, and the imports coal, timber and iron. The harbour was deep enough to admit vessels of 5 m draught, and permitting large steamers to unload along its quays. Wismar was the location of the Norddeutsche Dornier-Werke aviation plant and railway factories. Throughout World War II Wismar was heavily damaged by Allied air raids. At the end of the war in Europe, as the line of contact between Soviet and other Allied armies formed, Wismar was captured by the British 6th Airborne Division on May 2, 1945. [3] On 7 May 1945 General Montgomery and Marshal Konstantin Rokossovsky met in Wismar, Marshal Rokossovsky inspected British troops of the 6th Airborne Division. On July 1, 1945, due to the agreements of the Yalta Conference making Wismar a part of the Soviet Occupation Zone of Germany, the British troops departed as Soviet troops entered.

The town features heavily in the book 13 - Lucky For Some, which is about the history of the 13th (Lancashire) Parachute Battalion. There are many then and now photographs as well as maps and diagrams of battles that took place in the region.[4]

The centre of the old town is the huge Market Place, one of the largest in northern Germany (10,000 square metres), surrounded by elegant buildings with styles ranging from 14th-century North German Gothic to 19th-century Romanesque revival to Art Nouveau. The square's focal point is the Wasserkunst, an elaborate wrought-iron fountain imported from Holland in 1602. The northern side of the square is occupied by the Town Hall, built in neoclassical style in 1817–1819. Another notable building in the square is an ancient Gothic warehouse called Alter Schwede (The Old Swede), erected around 1380.

The 80 m high tower church of St Mary (Marienkirche) is the only remainder of the original Brick Gothic edifice, built in the first half of the 13th century. It suffered heavy damage in World War II, and was deliberately destroyed in 1960 under the East German Communist government.

The church of St. Nicholas (Nikolaikirche), built in 1381–1460, with very lofty vaulting, together with the Marienkirche, are regarded as good examples of the influence exercised in these northern provinces by the large church of St Mary in Lübeck.

The elegant cruciform church of St George (St Georgen-Kirche) dates from the first half of the 13th century. It was heavily damaged in World War II and repaired during 1990–2010.

The Fürstenhof, at one time a ducal residence, and later occupied by the municipal authorities, is a richly decorated specimen of the Italian early Renaissance style. Built in 1552–1565, it was restored in 1877–1879. The "Old School", dating from about 1300, has been restored. The town hall, rebuilt in 1829, contains a collection of pictures. The main gallery for fine arts is the Municipal Gallery "Baumhaus" located in the old harbour area of Wismar.

Nordic Yards Wismar is a shipbuilder located in Wismar and shipbuilding has existed since 1946 at the site.

Wismar in art and literature 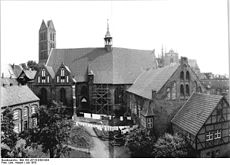 In Nosferatu, the protagonist Hutter's departure from Wisborg was filmed in Heiligen-Geist-Kirche's yard in Wismar. This photograph is from 1970.

Wismar is twinned with:

In addition, since 1991 there is a friendship with Halden in Norway.