Weißenburg (help·info))) is a commune in the Bas-Rhin department in Alsace-Champagne-Ardenne-Lorraine in northeastern France.

It is situated on the little River Lauter close to the border between France and Germany approximately 60 km (37 mi) north of Strasbourg and 35 km (22 mi) west of Karlsruhe. Wissembourg is a sub-prefecture of the department. The name Wissembourg is a Gallicized version of Weißenburg (Weissenburg) in German meaning, "white castle". 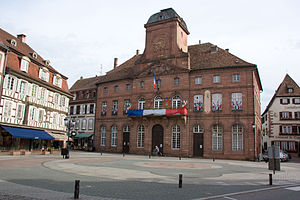 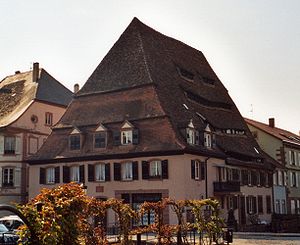 Weissenburg (later Wissembourg) Abbey, the Benedictine abbey around which the town has grown, was founded in the 7th century, perhaps under the patronage of Dagobert I. The abbey was supported by vast territories. Of the 11th-century buildings constructed under the direction of Abbot Samuel, only the Schartenturm and some moats remain. The town was fortified in the 13th century. The abbey church of Saint-Pierre et Paul erected in the same century under the direction of Abbot Edelin was secularized in the French Revolution and despoiled of its treasures; in 1803 it became the parish church, resulting in the largest parish church of Alsace, only exceeded in size by the cathedral of Strasbourg. At the abbey in the late 9th century the monk Otfried composed a gospel harmony, the first substantial work of verse in German.

In 1354 Charles IV made it one of the grouping of ten towns called the Décapole that survived annexation by France under Louis XIV in 1678 and was extinguished with the French Revolution. On 25 January 1677 a great fire destroyed many houses and the Hôtel de Ville; its replacement dates from 1741–52. Many early structures were spared: the Maison du Sel (1448), under its Alsatian pitched roof was the first hospital of the town. There are many 15th and 16th-century timber-frame houses, and parts of the walls and gateways of the town. The Maison de Stanislas was the retreat of Stanislas Leszczinski, ex-king of Poland, from 1719 to 1725, when the formal request arrived, 3 April 1725 asking for the hand of his daughter in marriage to Louis XV. The First Battle of Wissembourg took place near the town in 1793.

The “Lines of Wissembourg,” (French: Lignes de Wissembourg) (German: Weißenburger Linien) originally made by Villars in 1706, were famous. They were a line of works extending to Lauterburg nine miles to the southeast. Like the fortifications of the town, only vestiges remain, although the city wall is still intact for stretches.[1] Austrian General von Wurmser succeeded in briefly capturing the lines in October 1793, but was defeated two months later by General Pichegru of the French Army and forced to retreat, along with the Prussians, across the Rhine River.[2]

Wissembourg formed the setting for the Romantic novel L’ami Fritz (1869) co-written by the team of Erckmann and Chatrian, which provided the material for Mascagni's opera L'Amico Fritz.

Another Battle of Wissembourg took place on 4 August 1870. It was the first battle of the Franco-Prussian War. The Prussians were nominally commanded by the Crown Prince Frederick, but ably directed by his Chief of Staff, General Leonhard Graf von Blumenthal. The French defeat allowed the Prussian army to move into France. The Geisberg monument commemorates the battle; the town's cemetery holds large numbers of soldiers, including the stately tomb of French general Abel Douay who was killed in combat.[3] 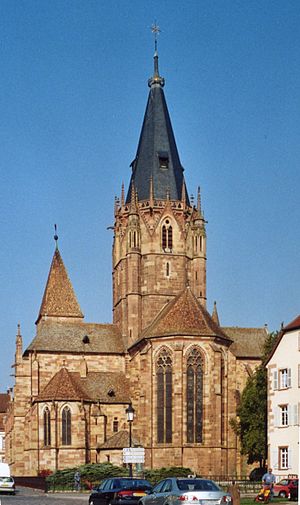 The picturesque town, set in a landscape of rolling wheat fields, retains a former Augustinian convent (1279) with its large-scale Gothic church, now the parish of Saints-Pierre-et-Paul; other medieval churches are the Église Saint-Jean, and the Église Saint-Ulrich. Its Grenier aux Dîmes (tithe barn) belonging to the Abbey is 18th-century but an ancient foundation. Noteworthy houses are the medieval "Salt house", the Renaissance "House of l'Ami Fritz" and the imposing classicist City Hall, a work by Joseph Massol.