From Infogalactic: the planetary knowledge core
Jump to: navigation, search
This article is about the form of humor. For other uses, see Wit (disambiguation). 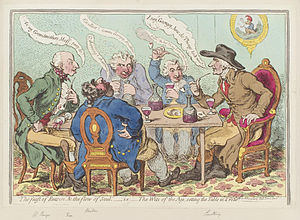 Wit is a form of intelligent humour, the ability to say or write things that are clever and usually funny.[1] A wit is a person skilled at making clever and funny remarks.[1][2] Forms of wit include the quip and repartee.

As in the wit of Dorothy Parker's set, the Algonquin Round Table, witty remarks may be intentionally cruel (as in many epigrams), and perhaps more ingenious than funny.

A quip is an observation or saying that has some wit but perhaps descends into sarcasm, or otherwise is short of a point, and a witticism also suggests the diminutive. Repartee is the wit of the quick answer and capping comment: the snappy comeback and neat retort. (Wilde: "I wish I'd said that." Whistler: "You will, Oscar, you will".)[3]

Wit in poetry is characteristic of metaphysical poetry as a style, and was prevalent in the time of English playwright Shakespeare, who admonished pretension with the phrase "Better a witty fool than a foolish wit".[4] It may combine word play with conceptual thinking, as a kind of verbal display requiring attention, without intending to be laugh-aloud funny; in fact wit can be a thin disguise for more poignant feelings that are being versified. English poet John Donne is the representative of this style of poetry.[5]

More generally, one's wits are one's intellectual powers of all types. Native wit — meaning the wits with which one is born — is closely synonymous with common sense. To live by one's wits is to be an opportunist, but not always of the scrupulous kind. To have one's wits about one is to be alert and capable of quick reasoning. To be at the end of one's wits ("I'm at my wits' end") is to be immensely frustrated.