Woburn Abbey (/woʊbən/[n 1][1]) occupying the east of the village of Woburn, Bedfordshire, England, is a country house, the family seat of the Duke of Bedford. Although it is still a family home to the current duke, it is open on specified days to visitors, along with the diverse estate surrounding it, including the historic landscape gardens and deer park (by Humphry Repton), as well as more recently added attractions including Woburn Safari Park, a miniature railway and a garden/visitor centre.

Woburn Abbey, comprising Woburn Park and its buildings, was set out and founded as a Cistercian abbey in 1145.[2] Taken from its monastic residents by Henry VIII and given to John Russell, 1st Earl of Bedford, in 1547, it became the seat of the Russell family and the Dukes of Bedford. The Abbey was largely rebuilt starting in 1744 by the architects Henry Flitcroft and Henry Holland for the 4th Duke.[2] Anna Maria, the wife of the 7th Duke, originated the afternoon tea ritual in 19th-century England.[3][4]

In April 1786 John Adams (the future second President of the United States on tour with Thomas Jefferson—who would serve as his vice president before becoming President himself) visited Woburn Abbey and other notable houses in the area. After visiting them he wrote in his diary "Stowe, Hagley, and Blenheim, are superb; Woburn, Caversham, and the Leasowes are beautiful. Wotton is both great and elegant, though neglected".[5] However in his diary he was also damning about the means used to finance the large estates, and he did not think that the embellishments to the landscape, made by the owners of the great country houses, would suit the more rugged American countryside.[5] 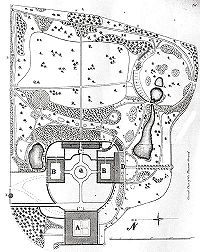 The layout of Woburn before partial demolition. Building 'C' was demolished, and the upper half of building 'A' (the east part of the main western building) as well.

Following World War II, dry rot was discovered and half the Abbey was subsequently demolished. When the 12th Duke died in 1953, his son the 13th Duke was exposed to heavy death duties and the Abbey was a half-demolished, half-derelict house. Instead of handing the family estates over to the National Trust, he kept ownership and opened the Abbey to the public for the first time in 1955. It soon gained in popularity as other amusements were added, including Woburn Safari Park on the grounds of the Abbey in 1970. Asked about the unfavourable comments by other aristocrats when he turned the family home into a safari park, the 13th Duke said, "I do not relish the scorn of the peerage, but it is better to be looked down on than overlooked."

The 13th Duke moved to Monte Carlo in 1975.[6] His son Robin, who enjoyed the courtesy title Marquess of Tavistock, ran the Abbey with his wife in his father's absence.

In the early 1990s, the Marquess and The Tussauds Group planned to turn the Abbey into a large theme park with the help of John Wardley, creator of the roller coasters "Nemesis" and "Oblivion". However, Tussauds bought Alton Towers and built one there instead.

From 1999 to 2002, the Marquess and the Marchioness, the former Henrietta Joan Tiarks, were the subjects of the Tiger Aspect Productions reality series Country House in three series, totalling 29 episodes, which aired on BBC Two. It detailed the daily life and the business of running the Abbey.[7] It inspired several Monarch of the Glen storylines.

The Marquess of Tavistock became the 14th Duke on the death of his father in November 2002 in Santa Fe, New Mexico, United States. The 14th Duke was the briefest holder of the Dukedom and died in June 2003.

On the death of the 14th Duke, his son Andrew became the 15th Duke, and he continues his father's work in running the Woburn Abbey Estate. The building is listed in the highest category of architecture at Grade I.[8]

The art collection of the Duke of Bedford is amongst the finest in private hands, and encompasses a wide range of western artwork. The holdings comprise some 250 paintings, including works by Rubens, Van Dyck, Canaletto and Velasquez. Moreover, the collection encompasses examples of the most expensive manufacturers of furniture, French and English in many periods, and a diverse collection of porcelain and silverware.[9]

View of the entrance to the Arsenal, Canaletto, 1732 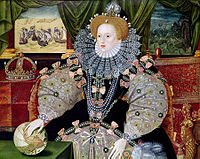 The Armada Portrait of Elizabeth I, 1588?

In 1970, Lucio Fulci filmed scenes for A Lizard in a Woman's Skin there.[citation needed] In May 1973, scenes from Coronation Street were set there and featured a cameo by the 13th Duke. He played himself greeting the characters: one of them, Hilda Ogden, was very impressed with the 'Canney-Letty' [sic] (Canaletto) room.[10]

In Anthony Horowitz's 1987 book Public Enemy Number Two, the book's main character Nick Diamond is framed for the theft of the Woburn Carbuncles as part of a plan by two Scotland Yard detectives to imprison him in order to find out the identity of a criminal mastermind known as The Fence—who ironically turns out to be the class teacher who was supervising Diamond and the other children on the school trip to Woburn Abbey.[11]

The Children's Film Foundation made a movie in 1957 called Five Clues to Fortune aka The Treasure at Woburn Abbey.[citation needed] Director Joe Mendoza filmed in and around Woburn Abbey and the Wildlife Park.

In 1977 and again in 2003 singer Neil Diamond held a series of concerts on the front lawn of the Abbey. The 1977 concerts were a part of a television programme broadcast in the United States.[citation needed]

In film and television, Woburn Abbey has been used as a filming location for films and programmes including The Iron Maiden (1962), The Flower of Gloster (1967) and Treasure Hunt (1986).[12]

In The Protector's War, a post-apocalyptic alternate history novel by S. M. Stirling, Woburn Abbey serves as a prison for an English knight; the knight is rescued and flees to the Willamette Valley of Oregon in what was the United States of America.