Woking Crematorium is a crematorium in Woking, a large town in the west of Surrey, England. Established in 1878, it was the first custom-built crematorium in the United Kingdom and is closely linked to the history of cremation in the UK.

The crematorium is in Woking, just outside St John's Village on Hermitage Road. Brookwood Cemetery, also known as the London Necropolis, is nearby but operated separately; it was established by the London Necropolis Company in 1849 to accommodate burials of London's deceased. 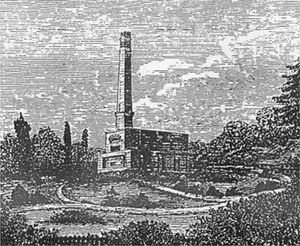 The cremator at Woking Crematorium in the 1870s, before the chapel and buildings were constructed 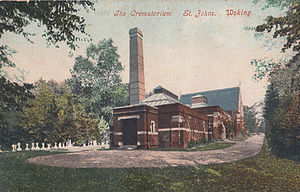 The crematorium in Woking was founded in 1878, when a piece of land close to St John's Village was bought by Sir Henry Thompson. He was a surgeon and Physician to the Queen Victoria. In 1874, he was a foremost founder and first president of the Cremation Society of Great Britain. The acre of land on which the crematorium was to be established was purchased with the aid of subscriptions (at £200 each) from the London Necropolis Company.[1] It was both secluded yet readily accessible, as a train service, suitable for the conveyance of the dead, already ran between London Waterloo Station and Woking.[2] The cremator was constructed by Professor Paolo Gorini of Lodi, Italy. It was not initially enclosed in a building but stood free in the crematorium grounds. A chapel and other buildings were only added in the late 1880s.

The new crematorium was first tested on 17 March 1879, when the body of a horse was cremated. The inhabitants of Woking showed strong antipathy to the crematorium and appealed to the Home Secretary, Sir Richard Cross, to prohibit the use of the building. Only after cremation had been declared legal in February 1884 during Dr. William Price's trial, could the Woking facility begin to operate.[2]

On 26 March 1885, the first official cremation in the UK took place in Woking. The deceased was Mrs Jeannette C. Pickersgill, whom The Times described as "a well-known figure in literary and scientific circles". By the end of the year, the Cremation Society of Great Britain had overseen two more cremations, a total of 3 out of 597,357 deaths in the UK that year.[1]

In 1886 ten bodies were cremated at Woking Crematorium. During 1888, in which 28 cremations took place, the Cremation Society planned to provide a chapel, waiting rooms and other amenities there. The subscription list was headed by the Dukes of Bedford and Westminster. The Duke of Bedford later donated money to complete the buildings and to purchase ground adjacent to the property. The buildings were constructed in the character of English thirteenth-century Gothic and were available for use in January 1891.[2]

In 1892, 104 cremations were carried out at Woking.[2] In 1902, the first crematorium was opened in London (Golders Green Crematorium). By 1911, the original one acre site at Woking was extended to 10 acres and a Garden of Remembrance added.[2]

Elected president of the Cremation Society in 1921, the 11th Duke of Bedford had the original cremator from Woking transferred to a new chapel at Golders Green Crematorium, where it was later used for his own cremation in 1940.

Among those cremated here are:

Thirteen holders of the Victoria Cross are recorded to have been cremated here.[3]

There were 135 Commonwealth service personnel from both World Wars cremated here. A memorial panel fixed onto the wall of the columbarium by the Commonwealth War Graves Commission lists the names. Numbers after some entries indicate niches in the columbarium, in other cases the ashes were scattered.[4]