A wolf tone, or simply a "wolf", is produced when a played note matches the natural resonating frequency of the body of a musical instrument, producing a sustaining sympathetic artificial overtone that amplifies and expands the frequencies of the original note, frequently accompanied by an oscillating beating (due to the uneven frequencies between the natural note and artificial overtone) which may be likened to the howling of the animal. A similar phenomenon is the beating produced by a wolf interval, which is usually the interval between E♭ and G♯ of the various non-circulating temperaments. 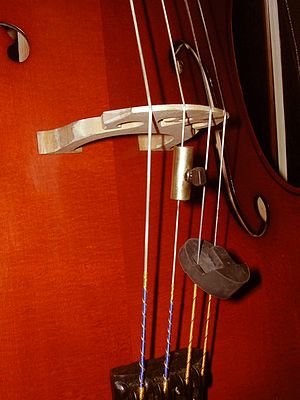 A brass wolf tone eliminator typically placed on the G string (second string from the left) of a cello, between the bridge and the tailpiece. (The black rubber piece on the D string (third from the left) is a mute.)

Wolf tones are usually only noticed on bowed instruments, most notably the violin family, since the tones produced are played for much longer periods, and thus are easier to hear. Frequently, the wolf is present on or in between the pitches E and F♯ on the cello, and around G♯ on the double bass.[1][2] A wolf can be reduced or eliminated with a piece of equipment called a wolf tone eliminator. This is a metal tube and mounting screw with an interior rubber sleeve, that fits around the offending string below the bridge. Different placements of this tube along the string influence or eliminate the frequency at which the wolf occurs. It is essentially an attenuator that slightly shifts the natural frequency of the string (and/or instrument body) cutting down on the reverberation.[3]

While it has been said[by whom?] that Lou Harrison wrote a piece (evidently reworked as the second movement of the Suite for Cello and Harp) that exploited the wolf specific to Seymour Barab's new cello,[citation needed] there is no clear evidence that this occurred.

Naldjorlak I, composed by Éliane Radigue for realisation exclusively by the cellist Charles Curtis is in fact composed solely around the manipulation of the wolf tone of Curtis's cello.

It is rumoured that the Amadeus Quartet were in professional circles nicknamed the "Wolf Gang", punning on the name of Wolfgang Amadeus Mozart.