Wolfgang Alexander Albert Eduard Maximilian Reichsgraf Berghe von Trips (4 May 1928 – 10 September 1961) was a German racing driver. He was the son of a noble Rhineland family.[1]

Formula One and sports car driver 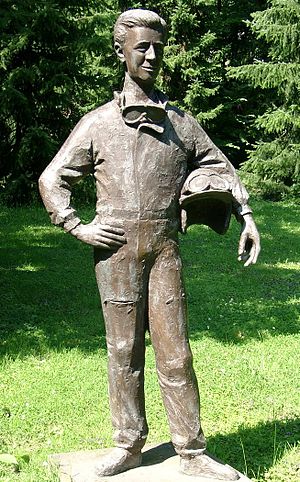 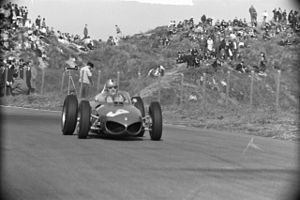 He sustained a concussion when he spun off track at the Nürburgring during trial runs for a sports car race held in May 1957. His Ferrari was destroyed. It was the only one of its marque to be entered in the Grand Turismo car class of more than 1600 cc.[2] Von Trips was forced out of a Royal Automobile Club Grand Prix at Silverstone, in July 1958, when his Ferrari came into the pits on the 60th lap with no oil.[3] The following August he was 5th at Porto in the 1958 Portuguese Grand Prix. Won by Stirling Moss in a Vanwall, von Trips completed 49 laps and was one lap behind at the finish. Moss was more than five minutes ahead of Mike Hawthorn, who finished 2nd in a Ferrari.[4]

In July 1960 von Trips was victorious in a Formula Two event in a Ferrari, with a newly introduced engine in the rear. The race was in Stuttgart and was called the Solitude Formula Two Grand Prix. It was a 20-lap event with the winner averaging 102.21 m.p.h. over 142 miles.[5] He won the Targa Florio, 10-lap 448 mile race, in May 1961. Von Trips achieved an average speed of 64.26 mph in his Ferrari with Olivier Gendebien of Belgium as his co-driver.[6] Von Trips and Phil Hill traded the lead at Spa, Belgium during the 1961 Belgian Grand Prix, in June 1961. Hill led most of the way in front of a crowd of 100,000 people.

Ferraris captured the first four places at the race conclusion with von Trips finishing second. The Formula One World Championship driver competition at this juncture in 1961 was led by Hill with 19 points followed by von Trips with 18.[7]

The 1961 Italian Grand Prix on 10 September could have been the culmination of von Trips' career, as a third place would have been sufficient to secure the Formula One World Drivers Championship that year. At the Italian Grand Prix at Monza, his Ferrari collided with Jim Clark's Lotus. His car became airborne and crashed into a side barrier, fatally throwing von Trips from the car, and killing fifteen spectators.[8]

"Von Trips and I were racing along the straightaway and were nearing one of the banked curves, the one on the southern end. We were about 100 metres from the beginning of the curve. Von Trips was running close to the inside of the track. I was closely following him, keeping near the outside. At one point Von Trips shifted sideways so that my front wheels collided with his back wheels. It was the fatal moment. Von Trips' car spun twice and went into the guardrail along the inside of the track. Then it bounced back, struck my own car and bounced down into the crowd."[1]

Movie footage of the crash that surfaced after the race showed that Clark's memory of the incident was inaccurate: after colliding with Clark, von Trips' car rode directly up an embankment on the outside of the track and struck a fence that spectators were closely packed behind.

At the time of his death von Trips was leading the Formula One World Championship. The belief that Wolfgang von Trips would not have been spared his fate, as a plane he was scheduled to fly in to the USA crashed over Scotland, is entirely hypothetical—Von Trips only would have been on the flight in question had he decided to retire from racing.[9] However, he had previous incidents at the Autodromo Nazionale Monza, where he crashed cars in the 1956 Italian Grand Prix and the 1958 Italian Grand Prix, and was injured in both events.[1]

In 1961 von Trips had established a go-kart race track in Kerpen, Germany. The track was later leased by Rolf Schumacher, whose sons, Michael and Ralf, made their first laps there. Coincidentally, Michael's win in the 1992 Belgian Grand Prix was the first full-length Grand Prix won by a German since von Trips' last win at Aintree in 1961.