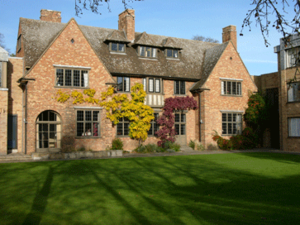 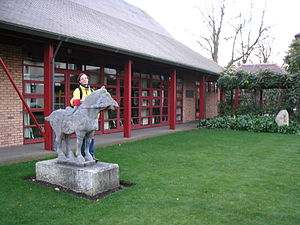 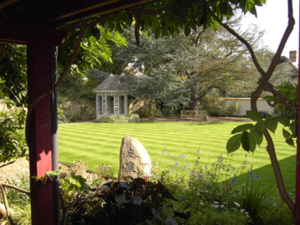 Wolfson College is a constituent college of the University of Cambridge in Cambridge, England. The majority of students at the college are postgraduates. The college also admits "mature" undergraduates (aged 21 and above), with around 15% of students studying undergraduate degree courses at the university. The college was founded in 1965 as "University College", and changed its name to Wolfson College in 1973 in recognition of the benefaction of the Wolfson Foundation.[1] Wolfson is located to the west of Cambridge city centre, near the University Library. It was the first college of the university to admit men and women as both students and Fellows.[2]

As one of the more modern colleges in Cambridge, Wolfson does not follow all of the traditions of some of the University's older colleges. For example, since the college's founding there has been no "High Table" reserved for Fellows at Formal Hall dinners; students and Fellows mix and dine together, although the tradition of wearing academic gowns to such occasions is still preserved. Both Fellows and students at the college have access to all the facilities. With students from over 70 countries, Wolfson claims to be one of Cambridge's most cosmopolitan colleges.[3]

The current President of Wolfson College is the historian Sir Richard Evans.

After the Second World War, the number of graduates of other universities who came to Cambridge to do research increased significantly. The university therefore decided to found University College in 1965 to help accommodate these students. The college was based at Bredon House, a property built in the early twentieth-century by John Stanley Gardiner, who was a Professor of Zoology at the university from 1909 to 1937. He donated the house, with its long narrow garden running from Barton Road to Selwyn Gardens, to the university upon his death in 1946. The college then purchased further property on its eastern boundary.

University College was opened on 30 June 1965 as a college for postgraduate students, with the classicist John Sinclair Morrison as its first President. At the time, all the undergraduate colleges of the university were single-sex institutions and University College was the first in the university to admit men and women as both students and Fellows. The college, from its outset, set out to be a cosmopolitan and egalitarian institution with distinct differences from the older, more traditional Cambridge colleges, with no Senior Combination Room, no "High Table" reserved for Fellows at formal dinners in the college and no portraits hung in the Dining Hall.

The college's founding deed required the college to either find an endowment within 10 years or face dissolution. In 1972, the Wolfson Foundation agreed to provide a capital endowment and help to fund the construction of central buildings around Bredon House and the college's East and West Courts. In recognition of this, the college was renamed Wolfson College on 1 January 1973.

The new buildings (designed by the architect Michael Mennim) were opened by Queen Elizabeth II and the Duke of Edinburgh in 1977. Though most of the college's buildings are modern, the design of the campus is similar to that of the university's older colleges, with buildings grouped around two main courts. The floor of the entrance hall to the main building is made of thin slices of granite taken from the old London Bridge (the main section of which was taken to Arizona to be rebuilt in the late-1960s).

Further building and acquisition of neighbouring properties has continued. In the 1980s, the college purchased the house and garden owned by Sir Vivian Fuchs on the western side on the college. Plommer House on the northern side of the college was also left to the college in his will by Dr Hugh Plommer, a founding Fellow of the college. The acquisition of property has allowed for the building of a number of new facilities, mainly funded by donations from philanthropic foundations and individuals. A major donation from the Singaporean businessman and philanthropist Dr Lee Seng Tee (whose daughter studied at the college) enabled the construction of the Lee Seng Tee Library and the Lee Seng Tee Hall. Other major benefactions have come from the Fairleigh Dickinson Foundation and the Toda Foundation. In the 1990s, with the help of the Gatsby Foundation, the college purchased the "western field" on which was built the Chancellor's Centre and further residential blocks.

In May 2013, a college fellow, Tim Winter was caught in controversy when video footage came to public attention in which he stated that homosexuality was a sinful and "inherent aberration", with gays being "ignorant people who don't know what their bodies are for". A number of Cambridge students called for his resignation, but Winter claimed that the videos were over fifteen years old and reflected views that he no longer held.[4]

The college is known for its entertainment events and performances, which attract visitors from many other colleges of the university. These activities include formal dinners, concerts, dancing nights and music displays.

The Club Room, at the heart of the college, includes the college bar and a dance floor space. It is the main communal space for students, and is the venue for many entertainment events.[5]

The Wolfson College Boat Club is a popular society, and Wolfson is one of the strongest graduate rowing colleges in Cambridge.[6]

The library is open 24 hours a day, and the college itself is a short walk from the University Library.[7]

The head of Wolfson College is called the President.